Ugh, I’m embarrassed to admit that I made a serious error in reading the opinion. I cannot edit the post to correct the error. The mistake infects the entire post and the main point. I’m leaving up the post so you can understand my error, but I need to correct things here.

The defendant’s anti-SLAPP motion ONLY applied to the contract interference claim. This fixes two major concerns I had. First, the anti-SLAPP motion never reached the 512(f) claim. Second, the fact that 512(f) preempts the contract interference claim shows why the plaintiff wasn’t able to rebut the prima facie anti-SLAPP motion. We never got any further information on the 512(f) claim because the case settled before it was addressed. So this is still a bad ruling for 512(f), but not in the way I described. The takeaways are:

2) If you bring a 512(f) claim, be careful about bringing any parallel state claims, which may trigger anti-SLAPP motions

Major errors do happen on the blog occasionally, but they are painful each time. I’m so sorry about my mistake.

This ruling is from March but it just showed up in my Westlaw alerts. Oy, it makes my head hurt. 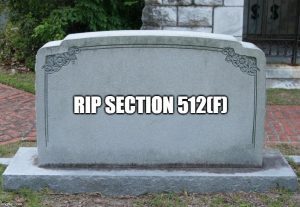 The plaintiff, Complex, runs a YouTube channel with 2.4M subscribers. The defendant, X17, publishes celebrity-related videos and photos. X17 believed that Complex’s videos infringed its copyrights. As a result, it sent at least 6 DMCA takedown notices to YouTube. YouTube removed those videos, froze Complex’s ability to upload new videos or edit its page, and threatened to terminate Complex from its service.

The court says that X17’s DMCA takedown notices to YouTube are protected by California’s anti-SLAPP law. The court says “filing of a takedown notices [sic] is constitutionally protected speech.” This copyright dispute was a matter of public interest because it affected Complex’s 2.4M YouTube subscribers. The court distinguishes Lenz as more of a private dispute. Because the court deems Complex’s 512(f) claim a SLAPP, it awards attorneys’ fees to the defense.

Unfortunately, this tension was exacerbated by two confusing aspects of the court’s opinion.

First, once the defendant establishes a prima facie case of qualifying for anti-SLAPP protection, the burden shifts to the plaintiff to show its prima facie case. Bizarrely, the court skipped that step entirely. Instead, after the court found this was a prima facie SLAPP, it simply stopped talking. I might feel better about my quandary if Complex had been given the chance to show that the takedown notices were in fact bogus. If it was, the anti-SLAPP motion should have been denied.

The court also rejects the contract interference claim. “Numerous courts within the 9th Circuit have held that 17 U.S.C. § 512(f) of the DMCA preempts state law claims based on DMCA takedown notifications.” Cites to Online Policy Group, Lenz, and Amaretto. I blogged more on this issue last year (regarding a ruling this court didn’t cite).

We don’t get a definitive denouement to this case or learn the value of the fee shift award. In June, the case settled without any further courtroom developments.

This ruling reinforces how Section 512(f) is misconstructed. Why would anyone ever bring a 512(f) claim? It almost never wins in court; and this ruling exposes the risk that a 512(f) claim could force the plaintiff to write a check to the defendant. RIP 512(f).