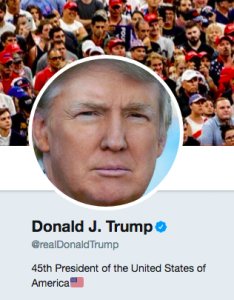 In the Knight Foundation’s First Amendment lawsuit against President Trump for blocking Twitter users, the Second Circuit says that his blocking of users based on their viewpoints violates the First Amendment. This is a resounding loss for the President. (Our blog post on the district court ruling is here.)

[the government’s contention that the President’s account is] private . . . founders in the face of the uncontested evidence in the record of substantial and pervasive government involvement with, and control over, the account.

The court cites the evidence reflecting Trump’s official use of the account and treatment of tweets as official by others, including government officials.

The court also concludes that the act of blocking is an official act, just like posting is.

The court clarifies that determining whether an account is a “government account” subject to First Amendment strictures is a “fact-specific inquiry.” It will depend on among other things, how the account is described, used, what features are made available, and how others (including agencies and members of the government) treat the account. As to this particular account, the court says it’s not a close question.

The forum analysis: Having concluded that the account is a public one, the court says that viewpoint discrimination is not allowed. (Citing to Halleck.) Forums can be metaphysical as well as physical, and social media deserves as much First Amendment protection as other media. (Citing to Packingham.) Turning to the forum classification, the court easily concludes that the Twitter account is a public forum since the interactive features of the account have been opened up indiscriminately. In any event, regardless of the nature of the forum, viewpoint discrimination is not allowed. (It never is.) The acts of liking, replying, and retweeting are all expressive in nature, and those cannot be restricted based on the viewpoint expressed by the public.

The government argued that blocking did not truly restrict anyone’s participation in the interactive space of the account. The court acknowledges the numerous workarounds available to users who are blocked but who nevertheless wish to post or view the tweets in question. The court says that, as acknowledged by the government, the workarounds are burdensome; and burdens that are triggered by viewpoint are equally anathema to the First Amendment.

Finally, the government argued that the account consisted of government speech which has greater latitude form a First Amendment standpoint. The court says that this can only be said of the President’s tweets themselves, not of the interactive space in question. There is no way that the users’ interaction with the account can be considered government speech.

The court closes with a reminder to the litigants (the court says “litigants” generically but it appears directed at one of them specifically):

“if the First Amendment means anything, it means that the best response to disfavored speech . . . is more speech, not less.”

The conduct of defendants in social media cases often feels infuriating to me as a citizen. You are an elected official and you’re spending your time trying to “block” constituents on social media, and then forcing them to litigate the issue. Really? This lawsuit is no different, except, sadly, it involves the President of the United States. The social media platforms should exercise their First Amendment rights and boot any politician who doesn’t agree to a set of ground rules. While the court in this case does not have occasion to rule on whether platforms can exclude users freely, as Eric notes, in other cases, courts have resoundingly answered that question in the affirmative.

It’s worth noting that (as flagged by the court in a footnote) this account is one the President will take with him as he leaves office. There is another official account for the President and the White House which “belong to the government”.

The court’s ruling does hint at a way for politicians to implement restrictions in terms of subject matter (i.e., a politician’s account is not always a “public forum” where anything goes). But to do so requires a set of ground rules that are carefully followed, and of course, discipline. This is hard to come by in the world of social media, and in this context in particular.

As Venkat also notes, after these government officials unconstitutionally censor their constituents on social media, those same constituents foot the bill for the litigation. Government officials who waste public money defending their illegal conduct don’t deserve the job–or your vote. What they really deserve is a bill for the litigation costs they racked up because they are unsuited for the job.

The lawsuit over @realDonaldTrump was super-easy because Trump never had a legitimate reason for blocking Twitter users (his insecurities don’t count). Because Trump acknowledged that he blocked other Twitter users for criticizing him, the DOJ was left to defend on the grounds that the @realDonaldTrump account was his private account. There was no possible way to make a plausible argument; Trump has literally fired government employees and announced new official government policies via tweets. Trump even stipulated that he used the account “to announce official decisions.” If I were a DOJ lawyer asked to defend this legal position in court, I’d rather resign my job.

So this lawsuit was always over Trump’s fragile ego. The Second Circuit, in judicial-speak, essentially tells him to grow up and stop whining about “presidential harassment”:

The irony in all of this is that we write at a time in the history of this nation when the conduct of our government and its officials is subject to wide‐open, robust debate. This debate encompasses an extraordinarily broad range of ideas and viewpoints and generates a level of passion and intensity the likes of which have rarely been seen. This debate, as uncomfortable and as unpleasant as it frequently may be, is nonetheless a good thing. In resolving this appeal, we remind the litigants and the public that if the First Amendment means anything, it means that the best response to disfavored speech on matters of public concern is more speech, not less.

This line sums it up the court’s view nicely: “once the President has chosen a platform and opened up its interactive space to millions of users and participants, he may not selectively exclude those whose views he disagrees with.”

The court also says it’s not addressing whether private social media services are required to follow the First Amendment, but other courts have decisively answered that question “no” (e.g., Williby v. Zuckerberg, plus Halleck).

Another Politician Probably Violated the First Amendment By Blocking a Constituent on Twitter–Campbell v. Reisch