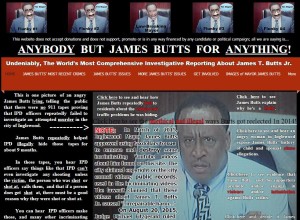 Joseph Teixeira lives in Inglewood, California, and he’s not a fan of Inglewood Mayor James T. Butts, Jr. (In a sign of remarkable judicial restraint, the judge doesn’t crack a single “butt” joke or pun). Teixeira blogs his objections about the Inglewood City Council and Mayor Butts at Inglewoodwatchdog.wix.com and posts YouTube videos under the pseudonym “Dehol Trouth” (although Seymour Butts seems like it would have been an appropriate pseudonym too). At issue are 6 videos posted by Teixeira, where he used portions of videos of Inglewood City Council meetings to prepare his own videos criticizing the mayor and the city council. In my world, gripe videos are a known hazard of having a glamorous political job. To Inglewood, it’s an egregious copyright violation.

Are the City Council Videos Copyrightable?

17 USC 105 says that materials prepared by the federal government aren’t copyrightable, but nothing in the Copyright Act otherwise prohibits other government actors from claiming copyright protection for the works they prepare. I don’t understand why Sec. 105 didn’t apply to state and local government copyrights because I can’t imagine many situations where a government actor should be able to assert copyright in the works it prepares as part of its government function. Because the public funds the work, none of the traditional utilitarian rationales for copyright law should apply to government-prepared works. The only logical exception is when the government entity acts as a market participant in a competitive market, but because the government already has several built-in advantages over other market participants, the government entity shouldn’t require any copyright incentive to enter those markets.

At minimum, we should view any government claim of copyright ownership with an extraordinarily high degree of skepticism. Copyright is a legal tool to suppress speech, so copyright assertion can overlap with governments’ attempts to censor discussions and debates about the government’s functioning. I would favor eliminating this irresistible censorious temptation by categorically preventing all government entities (federal, state, local) from obtaining copyright interest in their works. That would avoid the chilling effects of any ambiguous or borderline cases.

Without such a categorical rule, the question of whether Inglewood has a copyright in videos of its city council meetings proves surprisingly tricky. After a lengthy discussion, the court holds “that a California public entity may not claim copyright protection for a work it has created even if it falls within the scope of federal copyright protection” except where a state statute expressly authorizes copyright protection, such as California has done for software, educational materials and some materials related to toxic controls. As a result, Inglewood has no copyright protection over the videos of its city council meetings. This is a pretty good holding, but we’ll have to see if other courts follow it, and it would be better to have a dispositive federal statute codify this result.

The ruling leaves open the possibility that Inglewood will outsource the video production to a third party vendor, who could then claim copyright in the videos. See, e.g., this 2007 C-SPAN imbroglio. Also note that if the Garcia v. Google case hadn’t been reversed en banc, city councilmembers may have been able to assert copyright claims for their individual “performances.”

The videos’ lack of copyrightability should resolve this case entirely, but the judge made an alternative ruling on fair use for completeness (and to expedite possible appellate review). This is a fairly easy defense win for fair use:

Nature of use. The court calls Teixeira’s use “highly transformative” because:

The videos Teixeira produces address local politics in the City of Inglewood. They consist of his narrating his criticism of Mayor Butts over slides or other text, documents – such as a report by the Inglewood city clerk – and video clips, some of which are taken from the City Council Videos over which the City claims a copyright interest. The videos range in time from 3 minutes and 43 second to 15 minutes long, and the clips from the City Council Videos are considerably shorter. Some of the clips are used unadorned but they are most often frequently overlaid with Teixeira’s oral and written commentary and criticism, as well as music. Even when unadorned, they form only part of longer videos, with the clips contrasted with documents, sound recordings, and other video clips, accompanied with Teixeira’s written and oral commentary….The clips are carefully chosen and heavily edited. Teixeira juxtaposes them with other materials, puts his own commentary over and around them, and uses specific clips to underscore and support the points he makes in his videos. No person wishing to find out what occurred during a lengthy City Council meeting would be satisfied with viewing any of the Teixeira Videos.

Nature of work. “The City Council Videos are straightforward recordings of public proceedings.”

Amount taken. “Teixeira has copied only the parts of the City Council Videos that serve his purpose of making comment on them, or criticizing very particular statements by Butts.”

Market effect. “[T]here is no market for the City Council Videos and the accused works are not a substitute for the original works.” The court skewers the city’s argument that it’s denied potential revenue streams, pointing out that by law the city can’t make a profit from duplicating public records.

Fair Use Conclusion. The court recaps:

I like this case because it highlights two immutable principles of the human condition, which are seen routinely on the Internet:

Knowing principles #1, it’s so important that we curtail copyright law to prevent #2 from being successful. A ruling like this is a good step in that direction, but we need to do more to monitor other ways copyright law is used to squelch dissent. I still hope to write my sabbatical paper on how people are overusing copyright law as a privacy protection mechanism, often to accomplish the same goals as Inglewood pursued here.