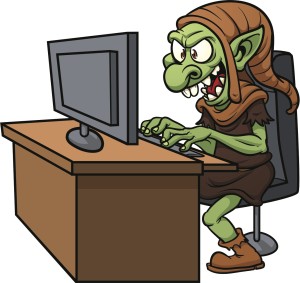 We’re revisiting the perennial topic of how to address teens doing stupid teen things online. As we’ve discussed repeatedly, teens constantly test limits online and typically lack the wisdom and perspective of adults. In my era, typical offline teen pranks rarely crossed over into the criminal realm. Today, in our overcriminalized society filled with computer exceptionalist crimes and paranoia about online threats, teens have increasingly thin cushions to excuse their online experimentations.

Today’s case was triggered by the following 2009 conversation on Varsamas’ MySpace page (both Varsamas and Nelson were former Barlow High students who didn’t graduate):

Varsamas: I live down the street from Barlow [High School]. I’m bored let’s shoot it up. Who’s with me on it? Oh and if you got plans let me hear them * * *. Mood: MASSACRE.

Nelson: im in, iv got some knives and I can get my dads 22 cal, we can start by killing [the campus security officer and an assistant principal].

Varsamas: Fuck yeah bro. Should we kill of the teachers or the students first?

Nelson: ummm lets go for the teachers sence there older wiser and stuff they wont freak out as bad as the kids would.

Varsamas: We should try it all sneaky like. Like slit their throats and shit like that. Oh or even choke them and watch the live drift out of them.

Nelson: but then we wont be abel to kill as many ppl it will take to long. If we go in all head strong blasting ppl in the face are score will be hire then we kill are selfs so the family will never get justice/peace

Katy: Probably shouldn’t be saying that, someone could take you seriously. Lol. Also, teach your friend to spell. He or she needs anatomy of spelling. Ha!

Varsamas: Hmm, you got a point, then we will need more guns. We should probably kill the cop asap. dont want anyone shootin us too.

Derek: can you give me a reason for the killing time?

Varsamas: to cleanse the gene pool of idiocy

Nelson: imao that cop was a prick anyway XD id love to kill him, one of my co-workers today said we should hold ppl at gun point and rape them * * * any way so what’s the date and time for us to do this?

This exchange might feel fresh to the participating teens, but I’ve seen countless similar online exchanges over the years, so it’s not nearly as fresh or clever as the participants think it is.

From a legal standpoint, did either Varsamas or Nelson mean anything they said? In the cold type of an appellate court opinion, this conversation sounds exactly like what bored teenage boys say to each other when they are ruing their general lack of control over their lives. Even Katy–arguably the real villain of this story–apparently didn’t believe the boys were serious, as evidenced by her “lol” after saying someone could take the comments seriously. Katy earns extra demerits for trying to police spelling errors in a MySpace conversation between bored teenage boys–a Sisyphean task if there ever was one.

The court doesn’t explain Katy’s relationship to Varsamas. The court also doesn’t explain why Katy took the fateful step of reporting this MySpace conversation to police. Perhaps she felt the atrocious spelling deserved criminal punishment? Perhaps she subscribes to the “see something, say something” motto a little too fastidiously?

In any case, armed With Katy’s hot tip, the police sprung into action. Later that day, they raided Varsamas’ house, where they found Varsamas “sitting in front of a computer in shorts and a T-shirt and wrapped in a blanket”–and no guns or attack plans.

The home raid struck out, so the authorities could have let the matter drop. Instead, the prosecutors brought “disorderly charges” against Varsamas and Nelson for “initiating and circulating a report concerning an impending catastrophe.” (They also brought unsuccessful harassment charges). A jury convicted both defendants on the disorderly conduct charges. Varsamas accepted his sentence of probation, community service and an apology letter. Nelson appealed.

The dispositive question on appeal is how Nelson “initiated” or “circulated” a “report.” The “report” at issue was really the one made by Katy’s, who unexpectedly escalated the MySpace musings into a police matter even though she didn’t seem to believe the chatter herself. Nelson didn’t initiate the conversation (Varsamas did), and Nelson didn’t “circulate” the conversation to anyone. In the end, the appellate court (having the self-acknowledged “luxury of extended deliberation and discussion”) easily saw the prosecutor’s misapplication of the disorderly conduct crime and dismissed the case. Indeed, I’ll go further and say that “disorderly conduct” charges for online conversations are almost always an prosecutorial overreach to punish incivil thoughts (and probably violate the First Amendment as well). Cf. the Drahota case.

I can’t say anything good about the exchange between Varsamas and Nelson. I hope my kids never say such stupid things; and the world needs less negativity and more constructive efforts to improve it. But was prosecution an appropriate “punishment” for the stupid remarks? I’ve discussed before how the legal system unintentionally treats teen pranks in a very adult manner, thus imposing an indirect but adult form of punishment due to years of legal uncertainty and significant legal defense costs (see, e.g., DC v. RR). Nelson’s 5 year saga provides more evidence of that.

* Are Parents Liable For Their Children’s Online Pranks?–Boston v. Athearn

* My Talk to High Schoolers About Accountability for Online Content