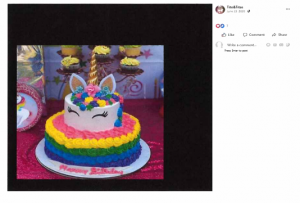 This is an employer/ex-employee dispute over a Facebook page. As alleged in the complaint, plaintiffs operated a bakery known as “La Baguette,” and hired defendants to manage aspects of the business. Defendants also managed the social media presence of the “La Baguette” business, which primarily consisted of a Facebook page. It had approximately 4,000 followers. In March 2020, plaintiffs began to have concerns about defendants’ loyalties to the business. They terminated one defendant; and when they learned that the other defendant was moonlighting at “Tito & Tita,” a Mexican food-truck business, they required the other defendant to sign a non-compete. The defendant who signed the non-compete provided assurances that the business at which he was moonlighting was not a competitive one because it did not sell baked goods. Some time later, one of the defendants changed the name of La Baguette’s Facebook page from La Baguette to “Tito and Tita Langley.” This allegedly caused historic posts to be bylined as “Tito and Tita Langley” rather than “La Baguette.” Some of the previous content on the page remained, but numerous posts were allegedly deleted, and many or all of the remaining posts looked like they were from “Tito and Tita.” According to the complaint, this created the misimpression that Tito and Tita was a continuation of “La Baguette.” Defendants also changed the address and phone number of the business on the Facebook page.

Plaintiffs fired the remaining defendant. When the plaintiffs could not obtain the log-in credentials for the Facebook page, they sued in state court. Defendants removed the case to federal court.

Taking [plaintiffs’] allegations as true, it follows that Tito & Tita represented it was associated with all the historic La Baguette content it failed to delete, associated with or endorsed by La Baguette as a successor, and endorsed by all La Baguette’s existing Facebook followers. The analogous non-digital conduct would be to take a photograph of a crowd inside La Baguette with the caption “La Baguette, Christmas party 2016,” erase “La Baguette,” write-in “Tito & Tita,” and keep the photograph on the wall where customers can see it. Tito & Tita allegedly modified content, rendering it false or misleading, then used that content to kick start its competing business.

The complaint alleges wrongful conduct resulting in the diversion of prospective customers, and it contains facts from which the Court can infer tortious intent and malicious purpose. Specifically, plaintiffs allege they were injured by defendants’ false representations and unfair competition. . . .  They have identified future business relationships likely to occur absent defendants’ misconduct, namely orders from the people who followed the Facebook page. . . .  They further allege several customers thought they were ordering from La Baguette when they were in fact ordering from Tito & Tita—specific potential business relations that would have occurred absent defendants’ interference.

They allege that defendants posted a message shortly after the “hijacking” seeking to divert people who followed the Facebook page, . . .  that defendants passed off their goods as plaintiffs’, . . . and that customers were in fact diverted and ordered from Tito & Tita when they intended to order from La Baguette . . . . .

Conversion and Detinue: Courts have been reluctant to extend conversion claims under Maryland law to pure intangibles. The outer limits of the conversion claim are where some documents representing the intangibles are improperly transferred to the defendant (such as stock certificates, promissory notes, or life insurance policies). Interestingly, the court doesn’t discuss treatment of the password, or communication transmitting the password, as such a document. Detinue, while distinct from conversion, has also not been extended to pure intangibles. Absent a hint from Maryland courts that they would be willing to expand this tort, the court is likewise unwilling to do so.

Breach of Fiduciary Duty: A breach of fiduciary duty is limited in the employment context to higher level employees. Further, Maryland courts allow departing employees to take preparatory actions. Defendants did not contest that they were high level employees. The court says their actions amount to more than mere preparation.

Breach of Contract: Plaintiffs only alleged a contract claim, based on breach of a non-compete, against the one defendant who had signed the non-compete. He had two legal arguments in favor of dismissal, neither of which succeeded. First, he argued lack of consideration. The court says continued employment, even if at-will, is sufficient under Maryland law, where the non-compete is only for the duration of employment. Maryland courts scrutinize consideration more closely where the non-compete extends beyond the termination of employment but that wasn’t at issue here. Second, the defendant argued that the specification of termination as a remedy meant that this was the employer’s sole remedy. The court says this argument is not supported by language in the agreement.

Unjust Enrichment and Conspiracy: The court also says plaintiffs adequately stated a claim for unjust enrichment and for conspiracy.

In a footnote, the court acknowledges the law is “evolving” with respect to employer ownership of social media accounts:

The law on the ownership of a social media pages created by employees for employers is evolving rapidly and varies between jurisdictions. See generally, Christopher A. Moore, Find Out Who Your Friends Are: A Framework for Determining Whether Employees’ Social Media Followers Follow Them to A New Job, 39 CAMPBELL L. REV. 493 (2017); Courtney J. Mitchell, Keep Your Friends Close: A Framework for Addressing Rights to Social Media Contacts, 67 VAND. L. REV. 1459 (2014); Zoe Argento, Whose Social Network Account? A Trade Secret Approach to Allocating Rights, 19 MICH. TELECOMM. & TECH. L. REV. 201 (Spring 2013). If this litigation continues and defendants wish to repeat this argument, they should support their assertion that they own the Facebook page with authority.

Defendants are free to flesh out their arguments regarding ownership of the Facebook page later in the case. 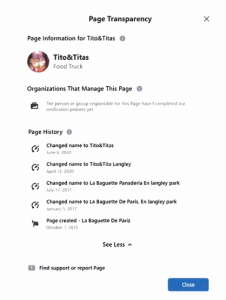 It’s helpful to compare and contrast this case with a pair of cases I blogged about last year.

In United Federation of Churches v. Johnson, the Satanic Temple of Washington tried to wrest control of its Facebook page from a competing faction. It relied on CFAA and cybersquatting claims, as well as tortious interference, consumer protection, and defamation claims. The claims were unsuccessful, and I speculated that the church may have had better luck if it had a viable trademark or a contract claim, neither of which it had. In contrast, in JLM Couture v. Gutman, JLM, the bridal wear company was successful at the PI stage precisely because it asserted trademark and contract claims. (NB: I have an update in the queue to my recent post recapping the Second Circuit’s decision on the JLM Couture case.)

The court’s discussion of the conversion claim was worth noting. Conversion does not neatly fit the bill in these cases, although plaintiffs have tried to shoehorn it into possible pleadings. One wonders how a domain name would fare under Maryland law.

What could the ex-employees have done to continue to use the Facebook page?: This is a tough one. The claims are presented through the trademark lens and they focused on false association. Much of the actions the court focused on were a result of “the way Facebook works”. If the former employees were able to change the page so only new content was labeled as coming from the new entity, would La Baguette have had recourse?

What about employee social media laws?: Maryland enacted a social media privacy law in 2021. As with other such laws, this law struggles with definitions. It appears to cover “personal account[s] or service[s],” but this is not further defined by the statute. Perhaps the facts in this case are at the fringe and the account is obviously a non-personal account? But those laws will always struggle to carve out what belongs to the employer and what is off-limits to the employer.

One thing to consider is that the business in this case relied on Facebook as its primary platform. I suppose it could have found itself in the same position with respect to its domain name (and website), but perhaps it would have had more readily available legal tools in that context.

Other coverage: “competitor’s alleged hijacking of Facebook page could violate 43(a)” (Prof. Tushnet)

← Justice Thomas Really, REALLY Wants Section 230 Repealed (Even If He Has to Do It Himself)
First Circuit Says Mirroring Qualifies for Section 230–Monsarrat v. Newman →
Subscribe to Blog via Email
Categories