Rebecca Zamolo appears to be a YouTuber/influencer who merchandises her brand in multiple ways. She claims that RedBubble users are infringing her IP and counterfeiting her offerings. The complaint includes many images showing the alleged infringements, such as: 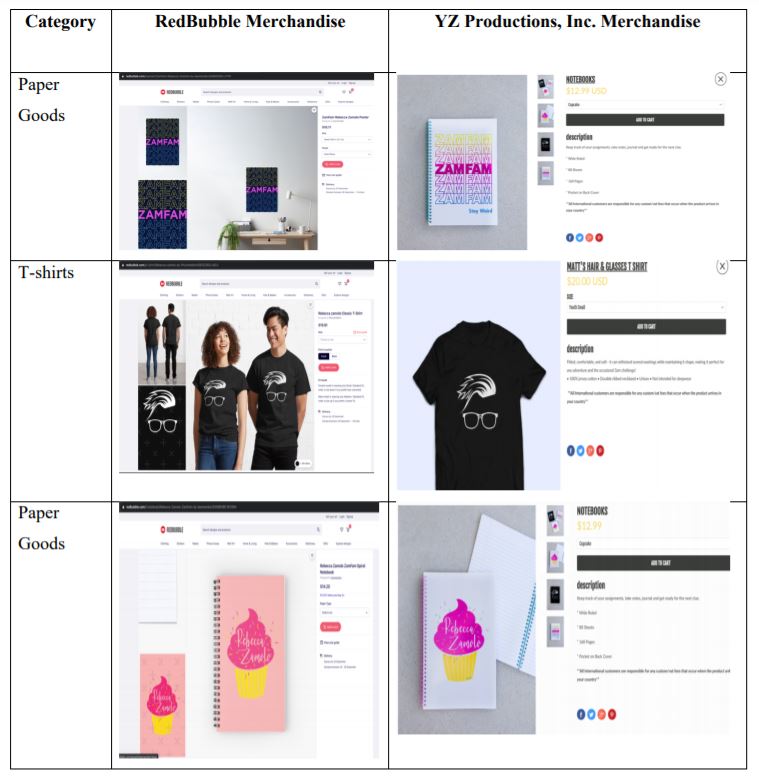 The court (another strong opinion by Judge Koh) grants RedBubble’s motion to dismiss many of the claims.

Contributory Trademark Infringement. The legal standard is whether the defendant “(1) knew of acts of direct infringement, and (2) exercised the requisite level of control over the means of infringement.” The court says “Plaintiff does not allege that Defendant had contemporary knowledge of which particular postings on Defendant’s website infringed upon Plaintiff’s trademarks.”

The plaintiff alleged that RedBubble should lose Section 230 because it provides various e-commerce support services to its merchants and takes a cut. The court disagrees, citing Free Kick Master and La Park La Brea. The court sidestepped some obviously conflicting precedent, including the Bolger and Loomis cases.

The court will let the plaintiff amend the complaint, and it appears the plaintiff can add some new facts to the complaint. So I look forward to blogging the ruling on the next motion to dismiss. It appears RedBubble did not try to dismiss the direct copyright and direct trademark claims, so we have yet to hear the court’s thoughts about those. Still, this is a good ruling for RedBubble, which appears to be having more success in court than some of its print-on-demand rivals.