Cafepress.com ($PRSS) provides a popular user-to-user marketplace websites that allows users to upload logos or slogans and sell items bearing those logos or slogans, which Cafepress.com manufactures on demand (a so-called “print-on-demand” service). Like any other user-generated content website, there’s always a chance that users will upload material that infringes third party copyrights and trademarks. A recent adverse court ruling against Cafepress.com raises some troublesome questions about Cafepress.com’s–and other print-on-demand vendors’–potential trademark liability exposure for its users’ uploads.

The case involves a trademark for the word phrase “Born to Rock,” which the plaintiff initially registered for electric guitars and subsequently registered for T-shirts. These trademark registrations (especially the latter) may be problematic. First, many other folks have used the phrase “Born to Rock” for quite some time (including Cafepress.com users), so the plaintiff may have problems showing that it is the first commercial user of the phrase or that consumers associate the phrase only with it. Second, the phrase is capable of many different meanings that have nothing to do with electric guitars or the plaintiff. For example, take a look at some of the T-shirt designs the plaintiff complained about: 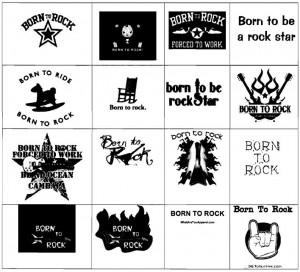 It’s quite a reach for the plaintiff to think its trademark registrations should apply to “Born to be a rock star” or “Born to Rock” associated with rocking chairs.

Background to the Litigation

Cafepress.com moved for summary judgment on two grounds: (1) it didn’t make a “use in commerce” of the plaintiff’s trademark, and (2) the “descriptive fair use” doctrine. In doing so, Cafepress.com didn’t press two other potentially strong arguments: (a) that the plaintiff’s trademark was invalid, and (b) consumers weren’t confused in the marketplace. Cafepress.com should be able to raise these arguments later. The opinion doesn’t reference another possible trademark defense for Cafepress.com, the “innocent printer” defense (15 U.S.C. 1114(2)(A)), though that may be a stretch due to the other marketplace services (such as payment processing) that Cafepress.com provides to its users.

Cafepress.com argued that the T-shirt references to “Born to Rock” weren’t intended to communicate a relationship with the trademark owner, and thus were not being used “as a trademark.” Normally this argument would apply to the trademark owner’s threshold right to sue at all, but “non-trademark use” is also an element of the defense of descriptive fair use (which allows the reuse of descriptive phrases for their lexical meaning).  The court says that it cannot categorically declare merchandised items referencing “Born to Rock” as not making a trademark use, because a jury may find some of the T-shirts—such as those with guitar depictions—are plausibly associated with the trademark owner.

(Many trademark geeks will gnash their teeth about the obvious doctrinal problems with the judge’s ruling, including the fact that a plaintiff can’t satisfy its prima facie elements with a true non-trademark use, the shifted burden of proof between the prima facie case and an affirmative defense, and the judge’s introduction of consumer confusion into the descriptive fair use question).

Implications of the Ruling

Lack of a “Fast Lane” Defense. Trademark law often lacks a “fast lane” for ending unmeritorious trademark cases. In these situations, trademark defendants with winning cases validate their decisions only after incurring substantial time and expense. In my opinion, the lack of a fast lane is a defect of trademark law that ought to be fixed. For more on this, see this essay.

Here, Cafepress.com sought a relatively quick win on two legal theories. The court rejected that effort, saying that at minimum the case needs to go before a jury. That means that even if Cafepress.com wins this case (which I think it should), Cafepress.com will spend a lot of money to do so—much more than the profits it has made and will make from “Born to Rock” items.

Further, because the “use in commerce” and “non-trademark use” fast-lanes didn’t work, Cafepress.com likely can’t quickly and cheaply defeat future claims by other trademark owners. This may have some bearing on its policies going forward (see below).

What Will Cafepress.com Do?

Despite this ruling, Cafepress.com could still wait for, and then respond more aggressively to, trademark takedown notices.  For example, in respond to this plaintiff’s demands, it could have categorically wiped out all of the “Born to Rock” designs, even those that probably weren’t infringing.  While more aggressive takedowns would placate most trademark owners in most circumstances, it’s not clear this would completely solve the legal problem (it depends on whether takedown notices are a precondition to Cafepress.com’s liability), and overinclusive takedown responses would reduce Cafepress.com’s revenues.

A third alternative would be to more aggressively pre-screen users’ items for trademark concerns.  This is also unattractive. Aggressive pre-screening is costly and not scalable; it’s error-prone (likely to find false positives and false negatives); Cafepress.com sellers won’t like the delays and false positives; and it could exacerbate Cafepress.com’s legal liability for the false negatives.  Thus, from my perspective, this ruling leaves Cafepress.com with all-around bad options.

I approached Cafepress.com for an official statement, and they sent the following:

CafePress recognizes that the court believes that there are factual disputes that precluded summary judgment in CafePress’ favor.  CafePress is confident that when the court and the jury hear the full record that they will see that there is no infringing content in this case, and will find in CafePress’ favor.  CafePress is a print on demand site where its users create all of the content that they or their purchasers select to be placed on items of merchandise.  CafePress does not create the content or select the products on which the content is applied.  CafePress stands up for the rights of its users to make lawful, non-infringing and fair uses of material and engage in free speech and express.  CafePress intends to vigorously defend its position and its users’ right of free speech in their content posted on the CafePress website.

My prior legal coverage of Cafepress.com-related litigation:

* Life May Be “Rad,” But This Trademark Lawsuit Isn’t–Williams v. CafePress.com (2010).  This case held that Cafepress.com didn’t face liability for taking down a user’s design in response to a trademark takedown demand.  The case also illustrates that Cafepress.com continues to struggle with (unreasonable?) trademark demands over thin trademarks–in that case, “Life’s Rad.”