Plaintiffs often target app stores for issues with third party apps. A recent court ruling in favor of Amazon’s AppStore and Google Play highlights the legal risks faced by app stores, as well as the benefits to consumers and society from not imposing too much liability on app stores. 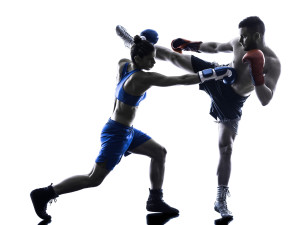 Unfortunately, they were referring to a different sport of the future.
Photo credit: “one woman boxer boxing one man kickboxing in silhouette isolated on white background” // ShutterStock

The plaintiff owns a registered trademark for the term “Free-Kick Master” in conjunction with television shows and movies about sports with kicking. It is upset that Amazon’s AppStore and Google Play carry third party apps named “Free Kick Master” that allegedly mimic the gameplay rules from its video productions. It sued Amazon and Google (and other defendants) for federal trademark infringement and various state law claims.

Trademark. The court says everyone agrees that the app stores aren’t directly liable for trademark infringement due to the third party apps’ names, but contributory liability is a possibility. The trademark owner failed to make the proper pleadings for contributory infringement:

Courts usually interpret Section 230’s immunity expansively, so it’s difficult for plaintiffs to find ways to hold online defendants accountable for third party content (or, in this case, apps). To get around Section 230, the plaintiff alleged that the app stores “have content guidelines and rules, or remove some products for violations of those rules, or provide technical assistance to developers.” Of course they do; those are basic services of any app store operator. The court is nonplussed by the allegations:

In the absence of any allegation that Amazon or Google acted as an author of the challenged content – e.g., that either Amazon or Google chose the names of the products, wrote any of the code, or provided encouragement or assistance in the allegedly infringing use of plaintiff’s mark on the products, or that either had notice that the third-party use was unlicensed and infringing – § 230 immunity applies.

This is the right result, but the judge uses terribly sloppy language to get there. The first two points (users named the product and wrote the app code) are right on, but the other points aren’t. There is no “encouragement or assistance” exception to Section 230, and Section 230 clearly and unambiguously isn’t a “notice-and-takedown” scheme. The court’s language is further garbled by its references, in discussing Section 230, to “infringement,” although Section 230 could turn on content “illegality.” I cringe to think how future plaintiffs will misread the court’s poor choice of words here.

The dichotomous legal treatments of trademark claims and claims involving other legal theories is a historical anomaly. Congress has not expressly addressed how to deal with online intermediaries’ liability for third party trademark infringement, which gives trademark owners lots of room to make legal mischief. In contrast, in Section 230, Congress emphatically shut down many other types of third party liability claims. But why are trademark owners’ claims privileged over other types of claims? There is no principled answer for this, and ultimately Congress may need to provide more guidance about Internet trademark rules. Indeed, just earlier this week, several online marketplaces asked the White House to take steps to help their users fight back against abusive trademark owner takedowns.

The real question at issue in this case is: what, if anything, we want app stores to do to police their premises? Trademark law currently allows trademark owners to nuke unwanted apps simply by claiming the app infringes and demanding its removal; while Section 230 (ignoring this court’s botched characterization) means that app stores can completely ignore threats related to most other types of claims over third party apps. We might think that the trademark notice-and-takedown system encourages app store providers to do more policing of their services; but actually, as illustrated by this case, Section 230 provides app stores with the legal breathing room they need to set minimum guidelines for apps and otherwise establish private rules that protect consumers and ensure quality consumer experiences. So, counterintuitively, we get more private policing and consumer protection by reducing app stores’ legal exposure. Lawsuits like this one, seeking to hold app stores accountable for third party apps, might make sense to the plaintiff but actually may be socially disadvantageous if they discourage app stores from effectuating their policing/consumer protection efforts. That’s why I think we should cheer when lawsuits like this fail.