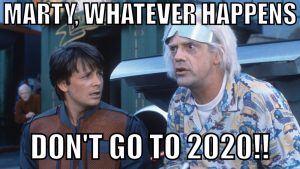 8. TSPA/TSF Launch. The launch of the Trust & Safety Professional Association and Trust & Safety Foundation should have important long-term benefits for our industry. More about the organizations’ goals and history.

6. TikTok/WeChat Bans. Pres. Trump’s EOs against TikTok and WeChat were pure censorship. Not surprisingly, courts rejected them on statutory and constitutional grounds (1, 2, 3, 4). Nevertheless, the EOs normalized the efforts of other countries to censor the Internet and build digital fortresses at their geographic borders. Terrible.

3. The CASE Act. The CASE Act creates a “copyright small claims court” which, to reduce costs, skimps on due process. We already have too much copyright trolling today (see, e.g., Liebowitz), and the new procedure will act as a trolling accelerant. If you are named in a proceeding, OPT-OUT.

2. The CCPA/CPRA. The CCPA’s rollout was delayed by the CA DOJ’s late rule-making, but it became fully enforceable in August. Yet, the CA DOJ hasn’t made any major public busts using the CCPA so far.

In November, Californians passed the CPRA. The CPRA cloned-and-revised the CCPA, but it didn’t incorporate any learnings from the CCPA (because it was drafted before the CCPA became law). The two standout CPRA “innovations” are (1) it creates a DPA-like entity that can prosecute violations in an administrative adjudication procedure, and (2) the legislature functionally cannot amend it.

Privacy law will only get worse until we get a federal preemptive law. That makes Congress our best hope for setting sensible privacy regulation–a discouraging prospect indeed.

1. Section 230 Saved Lives. The COVID-19 pandemic disrupted virtually every aspect of our lives in 2020 and killed hundreds of thousands of Americans. In a few chaotic days in mid-March, many key institutions–schools, employers, governments–closed their physical doors and switched to online operations. When our country needed it the most, the Internet rose to this challenge. The quick and effective shift to virtual interactions reinforced physical distancing, which reduced the virus’ spread and saved countless lives. The services that rescued us depend on Section 230–Zoom, online marketplaces, social media services, and many more. Congress will “reward” these services by reforming or repealing Section 230–a move that will put all of us at greater public health risks. 💯

Other Developments of Note

Lists from Prior Years

← CAN-SPAM Requires Falsity or Deception, But What Do Those Words Mean?–Rad v. US
Section 230 Protects App Store from Liability for Apps With Loot Boxes–Coffee v. Google →
Subscribe to Blog via Email
Categories