A Pre-History of the Trust & Safety Professional Association (TSPA) 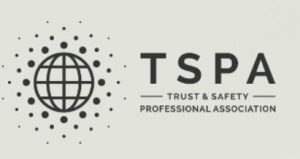 I am part of a team that announced today the launch of two organizations, the Trust & Safety Professional Association (TSPA) and the Trust & Safety Foundation Project (TSF). TSPA will support the global community of professionals who develop and enforce principles and policies that define acceptable behavior online. TSF will focus on improving society’s understanding of trust and safety through educational programs and multidisciplinary research. This post explains my perspectives on how we got here.

In Spring 2017, I was stunned by a draft bill from Rep. Ann Wagner that eventually became FOSTA. The drafters clearly did not know how Internet companies moderated content or how the bill would undermine the user-generated content ecosystem without achieving its goals. In part to help inform the regulatory discourse, the High Tech Law Institute organized a conference called “Content Moderation & Removal at Scale,” held at Santa Clara University in Feb. 2018. The goal was simple: to get companies to share, on the record, facts-and-figures about their content moderation operations. A dozen companies ultimately presented. The conference took 10 months and 100+ phone calls to organize.

The conference was a major success. 200+ people attended and hundreds more watched the live-stream or the videos. The event spurred three localized sequels, under the “COMO” brand, in Washington DC (May 2018), NYC (October 2018), and Brussels (February 2019).

At the SCU event, attendees clearly loved engaging with each other as a community. Following the event, I wanted to build the infrastructure to keep those interactions going, but the project was bigger than I could handle.

After the SCU event, I was independently approached by an existing professional association. They saw a market opportunity and wanted to explore it. They retained me to prepare a market analysis. I presented my findings to the association’s board in June 2018. My recommendations, and the board’s response, were mixed. Thus, I was not surprised when the association decided not to pursue the opportunity immediately; but it was fine for me to go forward if I wanted.

In summer 2018, I asked my network for referrals of people interested in helping trust & safety professionals. Tim Lordan–who ran the COMO DC event–referred me to Clara Tsao. Clara had worked on content moderation issues at a prior government stint; and she was starting a Mozilla fellowship that would give her time to work on the project. Clara and I started our preliminary work in January 2019.

Adelin Cai presented for Pinterest at the SCU conference (she did a terrific job) and has long thought about ways to support the trust & safety community. In February 2019, Adelin mentioned on Facebook that she was considering consulting opportunities. I asked her to join Clara and me. It took some persuasion, but Adelin agreed to join the effort subject to some time limits (that both of us knew wouldn’t stick).

Throughout 2019, Clara and Adelin built the organizations, with support from me (and others). Clara incorporated the TSPA organization in November 2019. Adelin, Clara, and I were the initial directors; Adelin is the board chair. Soon thereafter, the Internet Education Foundation (run by Tim Lordan) agreed to act as TSF’s fiscal sponsor.

After extensive discussion, Adelin, Clara, and I decided to seek founding sponsors–a lengthy and time-consuming endeavor. I think we have an outstanding roster of supporters that reflects the diverse range of Internet services (and we expect to add many more). I’m grateful for the founding sponsors’ votes of confidence.

Throughout 2018 and 2019, I mentioned the project to Alexander Macgillivray (“amac”) each time I saw him. He’d worked with trust & safety people for two decades and wanted to support them. amac and Denelle Dixon joined the board in early 2020.

That takes us to today. Together, we have built an infrastructure to help the trust & safety community, including content moderators, organize and help each other. Where we go from here largely depends on what our members, the individual trust and safety practitioners, want. I’m so excited to get started.

In addition to the five directors, many other folks have played critical roles along the way, including: