Section 230 had such a drama-filled year that I decided to do a separate roundup, in addition to my annual Internet Law wrapup coming soon. (I know 2020 feels like it was a decade ago…) Trigger warning: this post is a shitshow. My list of Top 10 Section 230 developments of 2020:

#10: A Tsunami of Reform Bills Were Introduced.

Over two dozen Section 230 reform or repeal bills were introduced in Congress’ 116th session. In general, the bills reflected a partisan divide over Section 230: Democrats want more content moderation, Republicans want less. Virtually all of the bills were irredeemably terrible, such the the PLAN Act’s corporate welfare for landlords/hotels, Sen. Hawley’s pro-censorship bills, and batshit crazy bills like Gosar’s bill. Some bills attracted more than a dozen co-sponsors, but only a few got a hearing, and none passed either chamber. Many bills were election-year stunts pandering to voters, but it’s horrifying how many Congressmembers publicly supported burning down Section 230. 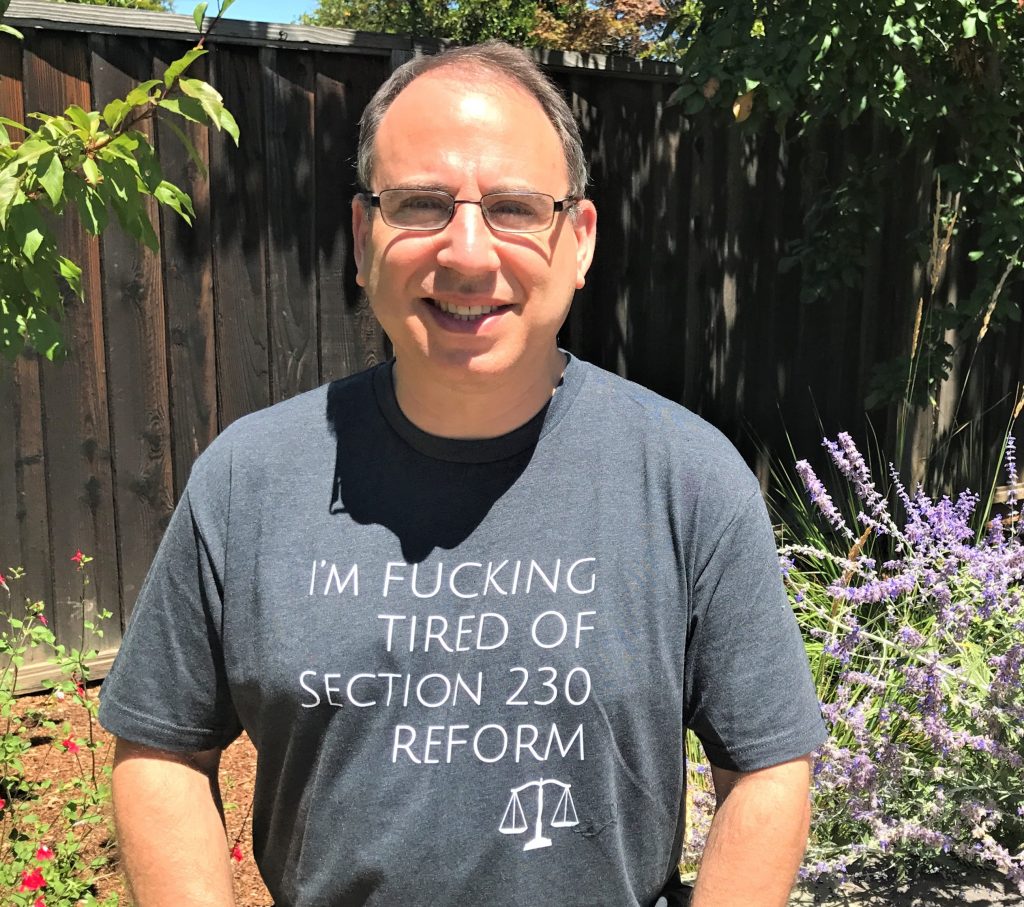 #9: The PACT Act Shows How Even Well-Intentioned Senators Are Prepared to Burn Down Section 230.

The PACT Act was a bipartisan Section 230 reform bill from Sens. Schatz and Thune, both considered pragmatic senators. The PACT Act proposed some Section 230 reforms, but its main provisions would impose procedural obligations on UGC services, such as mandatory disclosure of editorial policies, mandatory acknowledgement of complaints, quicker removals, mandatory appeals of removals, and transparency reports. While I support UGC services voluntarily adopting better procedural mechanisms, it’s different when they are mandatory. The PACT Act requirements are expensive, would break automated spam-prevention measures, and create new vectors of attack for trolls, malefactors, and pernicious plaintiffs. When the PACT Act returns in the 117th Congress, I hope it gets a complete makeover.

#8: Sen. Graham Tries to Jam the EARN IT Act Through the Senate.

The bipartisan EARN IT Act, sponsored by Sens. Graham and Blumenthal, nominally targeted online CSAM (“child pornography”), but many believed it sought to ban E2E encryption. The bill initially proposed forming a commission to develop “guidelines” for reducing CSAM. Eligibility for Section 230 would then be conditioned on compliance with the “guidelines” (a/k/a the “earn it” part of the act). Over time, the bill delinked the commission’s guidelines from Section 230 and instead proposed to categorically repeal Section 230 for CSAM-related claims. However, without the commission’s expert guidance showing that repeal would redress CSAM, a 230 repeal could counterproductively exacerbate the CSAM problem. Nevertheless, the Senate Judiciary Committee unanimously approved the bill, and Sen. Graham unsuccessfully tried to push the bill through the Senate via unanimous consent (called “hotlining”). Section 230/CSAM reform will come back in the 117th Congress.

This post will discuss only one Section 230 ruling, the Bolger v. Amazon ruling. Diverging from other court rulings, the California Appeals Court held that Amazon acts as the retailer of marketplace items sold by third-party vendors, which makes Amazon potentially strict liable for those items (at least, those fulfilled by Amazon). Section 230 didn’t protect Amazon in that circumstance.

Rattled by this ruling, Amazon embraced a California bill that imposed strict liability for Amazon’s marketplace–and its competitors (and many non-competitors). The bill died, but it will resurrect in 2021, and Amazon looks ready to bargain with legislatures.

Most likely, Amazon will wind down its marketplace (or severely restrict the number of marketplace vendors). Amazon will move some marketplace items into its retailer model (others will be excised from its catalog), which will give Amazon even more power over its vendors and further consolidate Amazon’s leadership in online retail. While the marketplace’s demise will suck for Amazon, its stranglehold over online retail might make up for it.

This is the first of three items related to Trump’s May 2020 Executive Order 13925, detailed below. The EO directed the DOJ to propose Section 230 reforms. This was disingenuous (like the rest of the EO) because the DOJ was already working on anti-Section 230 reforms. In February, the DOJ held a workshop on Section 230 styled as a fact-finding inquiry, but it was performative theater to justify the reforms the DOJ already planned. Unsurprisingly, the DOJ’s anti-Section 230 recommendations and explanations were all terrible. It’s unclear if the proposals survive the departure of Barr/Trump, or if they will fade away as a shameful DOJ misstep.

This is another EO-related item. The EO directed the NTIA to petition the FCC to interpret Section 230. The NTIA petition was typical Trump-era clownery–it misstated the facts and law, and oy, so many typos. Most 1Ls could do better after a month in Legal Writing. Reading the NTIA petition made me sick that our tax dollars produce such garbage.

The NTIA petition triggered a tsunami of comments from well-informed folks, uninformed folks, #MAGA nuts, and Russian bots. In October–in a move benefiting the Trump campaign–Pai claimed the FCC had the authority to make rules about Section 230, so the FCC would proceed with a rule-making. Last week, Pai backpedaled and said the petition wouldn’t proceed after all–good news, but sus.

In 2019, the Ninth Circuit issued a dangerous Section 230(c)(2)(B) ruling that exposed makers of anti-spyware/anti-spam/anti-virus software to greater liability. The ruling poses significant risk for cybersecurity, even though we need more security, not less. The software vendor unsuccessfully sought certiorari from the US Supreme Courti.

In conjunction with the cert denial, Justice Thomas issued a statement about Section 230. The statement focuses on Section 230(c)(1), even though the cert petition primarily briefed Section 230(c)(2)(B). Not surprisingly, the statement repeatedly misstated the facts and law. It rehashed many standard conservative criticisms of Section 230 that you see on Breitbart, and timing-wise, it coincidentally (?) gave the Trump campaign another talking point.

Though I doubt Justice Thomas’ statement will persuade his colleagues, it signaled that Justice Thomas is ready to vote against Section 230. This should encourage plaintiffs to file more Section 230 cert petitions.

Less than a year ago, Pres. Trump proudly signed the USMCA, which requires the US, Mexico, and Canada to provide Section 230-like protection. Given intervening developments, no one believes the US plans will honor its Section 230 commitments or press Mexico or Canada to embrace them either.

In May 2020, Trump issued an anti-Section 230 executive order that prompted the DOJ and NTIA/FCC items above. Trump adopted the EO in response to Twitter fact-checking one of his tweets, even though Section 230 reform won’t change Twitter’s fact-checking process at all. Like many other Trump-era efforts, the EO was sloppily drafted and riddled with campaign sloganeering.

Because the executive branch can’t unilaterally amend statutes, the EO never really intended to create legally binding consequences. Instead, it had three goals:

The EO accomplished all three of those goals on day #1. Ka-chow! Any actual damage to Section 230 was a bonus to the Trump administration.

#1: Trump Vetoes the NDAA Because It Didn’t Repeal Section 230.

The NDAA was a three-quarters of a TRILLION dollar bill that raises military salaries, which makes it a “must-pass” bill. The NDAA passed the House and Senate by “veto-proof” majorities.

Also around the same time, Congress sent Trump a stimulus bill with $600 checks to Americans and an omnibus funding bill. Trump put both bills in the cooler, saying that he supported $2,000 stimulus checks (embarrassing the Republican Congressmembers who held the line on $600) and threatening to veto the bills unless they repealed Section 230. To placate Trump, Sen. McConnell drafted a bill that included a $2k stimulus check and a repeal of Section 230, but it never got a vote.

In the end, Trump signed the stimulus and omnibus bills, and Congress overrode the NDAA veto, in each case without repealing Section 230. So Trump got absolutely nothing from his moves. I need to reread Art of the Deal.

While Trump’s moves didn’t change the legislation, they damaged Section 230. Essentially, Trump asked Americans if they wanted $2k now or Section 230 for the future–an easy call for many Americans in desperate conditions. Indeed, falling in line with Trump, a number of Congressmembers publicly supported full repeal. This expanded the Overton window to include outright Section 230 repeal, an option that previously no one took seriously.

The strategic implications for Section 230 are ominous. Many taxpayer-funded government officials repeatedly shit all over Section 230 all year. That propaganda has tarnished Section 230’s reputation and laid a foundation for terrible policy outcomes. Section 230 marks its 25th birthday on February 8, 2021, but I wonder it will be more of a post-mortem than a celebration.

BONUS: This blog post rounds up my Section 230 scholarship generally. My new Section 230 pieces from 2020: