The plaintiff is a wrestler, primarily known as Booker T. When he wrestles for WWE, he used the stage name G.I. Bro. There’s also a comic book line based on the G.I. Bro character. The defendant makes the Call of Duty videogames, including Call of Duty: Black Ops 4. Black Ops contained a character named David “Prophet” Wilkes. G.I. Bro claims that the Prophet infringes his character. On the left is G.I. Bro; on the right is the Prophet: 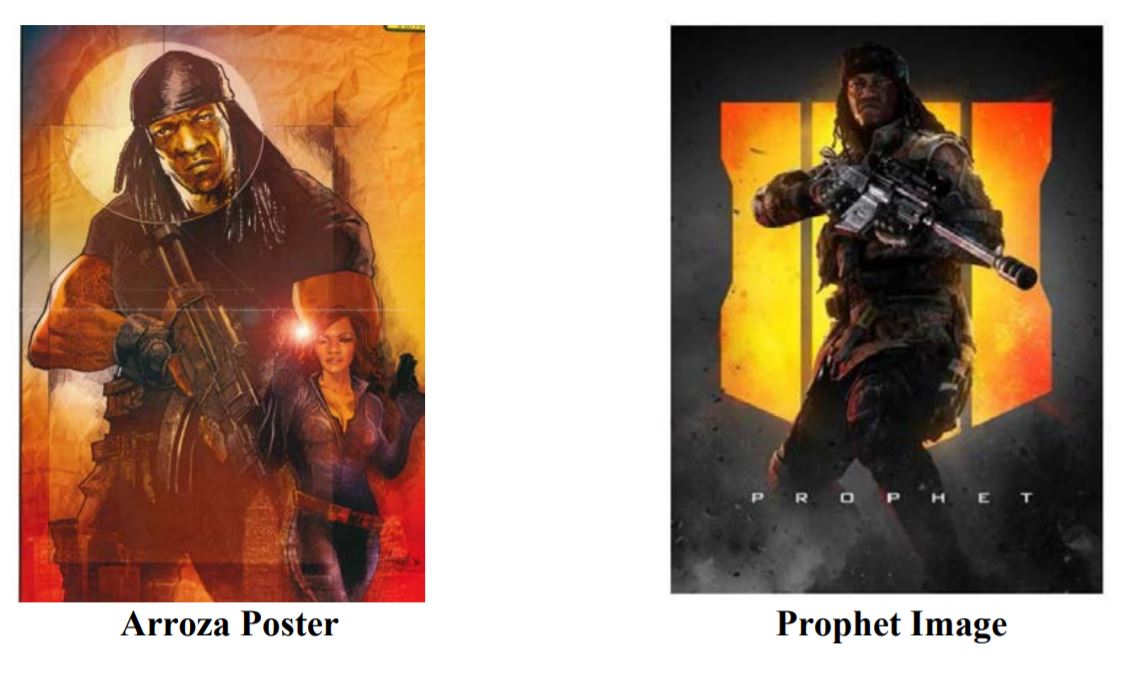 Copyright Infringement. Designers of the Prophet claim they independently created the Prophet and never saw the Arroza poster. Not surprisingly, this doesn’t take the defense very far:

Plaintiff has presented enough evidence to create a genuine issue as to independent creation. It is not clear at this time whether Defendants independently created the Prophet Image or instead used the Arroza Poster as inspiration. Accordingly, a jury should make this decision based on the evidence presented at trial. It is not implausible that Defendants saw the Arroza Poster at a comic book convention and used it as inspiration for the final Prophet Image. In a similar vein, the Court rejects Defendants’ striking similarity argument. Looking at the Arroza Poster and Prophet Image side-by-side, the two clearly share similarities and potentially even have striking similarities

1202 CMI. 1202(b) restricts CMI alteration/removal. The court says the plaintiff didn’t introduce sufficient evidence of actual removal or alteration. However, the 1202(a) claim for addition of false CMI goes to the jury. I’m not exactly sure why, but the court implies that a 1202(a) claim might be tenable every time a defendant infringes without attribution (so long as the precedent work had CMI). Thus, when talking about the requisite scienter, the court acknowledges the plaintiff’s contention he might “circumstantially prove bad intent through evidence showing striking similarity and/or copying by Defendants.” I don’t think the 506/1202(a) overlap is what the statute says or what Congress meant, and it would be a pretty significant conclusion if every 506 violation also essentially necessarily proved a 1202(a) violation because it may create additional or different remedies.

Copyright Damages. The defense argued that the Prophet character didn’t drive sales of Black Ops 4, so the product’s revenue shouldn’t define the damages calculation. The court responds that all that is required is that “a reasonable jury could find that sales of Black Ops 4 are reasonably related to Defendants’ use of the Prophet Image,” and that question goes to the jury as well.

Implications. It’s been a busy year for videogame IP law, but generally a good one for the defense. We’ve had a number of defense-favorable rulings in situations where the game manufacturers strove for greater verisimilitude, including realistic depictions of basketball player tattoos (but maybe not wrestler tattoos), musician signature moves (1, 2), and military vehicles. Perhaps ironically, Black Ops gets into potentially more trouble because it sought to create a fictional character. In other words, intentionally including the G.I. Bro wrestling character in Black Ops might have counterintuitively created less legal risk than creating a new fictional character the Prophet. Hmm.

Venue Note. From the patent enforcement context, the Eastern District of Texas is well-known as a plaintiff-favorable venue and a tough place to resolve cases before they reach a jury. I wonder if those dynamics underlie this result.

Bonus on License Drafting. The plaintiff assigned to WWE any IP rights used “in connection with the business of professional wrestling.” The court doesn’t resolve what this phrase means, so maybe it will work out as everyone expected. However, if you’re ever drafting an IP license, don’t do this. Especially if some IP is staying with the plaintiff and related IP is owned by WWE, it’s 100% foreseeable that those rights will collide in the future in a way that will sadden all of the commercial litigators tasked with untangling the dispute. Instead, drafters should spell out exactly what IP is being assigned by specific type; or spell out exclusive fields of use (something that is often done imprecisely as well, so be careful); or at minimum provide grantback licenses so that the parties are not simultaneously claiming ownership of identical assets. Or, in this case, maybe the parties meant that WWE owns all IP generated while the plaintiff was performing as a wrestler, not dissimilar to an employer claiming IP generated by an employee within the scope of employment. I’m not sure if the employment-like linkage would have eliminated the pileup, but it at least has a clear border. There were surely a dozen or more better ways to draft this clause. Any potential IP sharing situation is a terrible place to be laconic.

UPDATE: In June 2021, the jury ruled for the defense. See this backstory on the defense win.