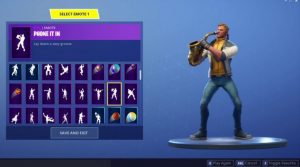 Pellegrino is a saxophone player with “externally rotatable feet,” which has helped him develop a nifty “signature” dance move while playing. The videogame Fortnite sells “emotes,” optional customizations for players’ digital avatars. Pellegrino alleges that the “Phone It In” emote depicts his signature dance move. Pellegrino sued Fortnite for a variety of claims. The court dismisses all of them, with prejudice, except for the false endorsement claim (which will fail later).

Publicity/Privacy Rights. Pellegrino claims that Fortnite misappropriates his likeness. Fortnite invoked a First Amendment defense. The court says the videogame depiction is transformative because the digital avatars don’t look like him and perform different functions (they are warriors, not musicians). Thus, the First Amendment preempts the claims.

False Designation of Origin. This is preempted by Dastar.

False Endorsement. The court says Dastar doesn’t bar this claim. To reach this conclusion, the court disagrees with a 2010 case from the same district. The court explains: “Pellegrino’s false endorsement claim alleges that Pellegrino is ‘unanimously credited with creating the Signature Move’, and as a result of Epic’s alleged use of Pellegrino’s likeness, Epic has ‘creat[ed] the false impression that Pellegrino endorse[s] Fortnite’. These allegations do not depend on the authorship or origin of the Signature Move and instead, assert a distinct claim for false endorsement.”

This shouldn’t give Pellegrino much hope. I don’t see any way for Pellegrino to win this claim. Among other problems, I don’t see how Pellegrino can prove that consumers thought Pellegrino endorsed Fortnite due to the inclusion of “his” dance move. Indeed, I expect most consumers have no idea who Pellegrino is, have not seen his dance move anywhere other than on Fortnite, or would not associate the dance move with Pellegrino even if they have seen it elsewhere.

State Trademark Claim. The signature move is within the scope of a choreographic work under copyright law, and Pellegrino claims Fortnite copied it without permission. There was no extra element to the state trademark claim, so copyright preempts it. Trademark infringement does require consumer confusion, but here the only confusion would relate to the copying, and that’s enough for the court to collapse this element into the copyright elements.

Trademark Dilution. Fortnite didn’t depict the signature move as its own trademark, so there wasn’t sufficient trademark usage to satisfy the prima facie case. Though unaddressed, the court easily could have dismissed the dilution claim for lack of fame.

Implications. This case has always been mockably unmeritorious. No one “owns” a signature dance move. The fact that the false endorsement theory survived the motion to dismiss was generous of the court, but it only gives false hope to the plaintiff. This case will fail, and perhaps the court will be receptive to motions for copyright or Lanham Act fee shifts when it’s all over.

This case is a nice companion to my blog post yesterday on tattoo copyrights in videogames. Both cases involve weaponization of IP to prevent videogames from depicting real life. I expect all such cases to fail eventually, but only after some lawyers make some money.