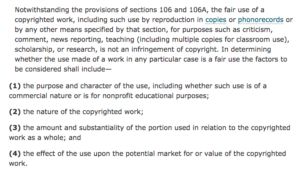 This is a copyright lawsuit by owners of celebrity photos against a gossip and entertainment website. It’s noteworthy because it went to trial and the plaintiffs prevailed, but the damage award is modest.

The court finds that plaintiffs owns or validly acquires various celebrity and public interest photos—in this case photos of Salma Hayek, Amanda Bynes, Selena Gomez, Zooey Deschanel, and others. The defendant runs a range of pop culture websites that receive approximately four million unique users per month. Apparently, the defendant has lost money every month but one.

Waiver: the court says plaintiffs did not waive its claims by saying “don’t worry about it”. A waiver has to be unequivocal and the person who made the statement was not even aware of the cease-and-desist letter. Further, there was not a “meeting of the minds” about the essential terms of the waiver.

Fair use: The first factor cuts against defendant as it used the images for the same purpose as were originally intended (to promote a celebrity news site, or as clickbait). While the use may be arguably editorial, the court says that this isn’t enough to constitute a commentary on the work.

For instance, a news report about a video that has gone viral . . . might fairly display a screenshot or clip from that video to illustrate what all the fuss is about.

[cite to Konangataa, the ill-advised Facebook birthing video copyright case]. Here, the images were used as “illustrative aids” because they depicted the subjects described in the articles. The court similarly finds that use in a banner is not transformative.

The court says the second factor weighs slightly in favor of plaintiff. The third factor also weighs in front of the plaintiff. The images were mostly used in their entirety. Those images that were cropped were only cropped to exclude the less relevant portion of the image.

Finally, the fourth factor also weighs in favor of plaintiff:

If [defendant’s] practice of using celebrity and human interest photographs without licensing were to become widespread, it is intuitive that the market for such images would diminish correspondingly . . .

The court finds in favor of plaintiff on its claims of infringement and rejects the fair use defense.

Damages: Plaintiffs sought actual damages for four of the images. They sought $2,680, pointing to $8,000 paid for their images by People Magazine and $3,400 paid by TMZ at the high end and $255 paid by popsugar at the lower end. The court finds popsugar more comparable and says it’s unclear whether popsugar paid $255 to license one or more images. Accordingly, the court awards $255 for four of the images.

As for statutory damages, the court finds that it has to consider the expenses saved by defendant, the revenue lost by plaintiffs, and the conduct of the parties. The court says that defendant had no real processes to prevent infringement, and one of their employees testified as to the propriety of posting screenshots or blurred images that linked through to the source. On the other hand, plaintiffs were also found to be lax about enforcing their copyrights. The court says that the appropriate damage figure should be $750, or five times the licensing fee, whichever is greater.

The court finally says it’s skeptical of plaintiffs’ request for fees, but invites plaintiff to submit a fee request.

This is a notable ruling in a few respects.

First off, it deals with viral content. I most recently blogged about the “Bold Guy Versus Parkour Girl” video dispute, and before that the Jukin Media dispute, both linked below. Eric blogged about the Facebook birthing video among others. This dispute offers an interesting look at that ecosystem.

It’s also relevant because it deals with fair use, an issue that has increasingly been resolved on the merits. While this is resolved at trial, this is one to add to the list. The court’s cite to Konangataa is worth flagging and shows that courts will entertain a fair use argument to use portions of a viral video in illustrating “what the fuss is about”. But merely using the content for its viral value is unlikely to move the needle in favor of fair use.

Finally, and perhaps most importantly, it looks closely at a claim for damages and offers a definitive take on both statutory and actual damages in the context of this type of media. Perhaps it’s owing to a failure of proof on the part of the plaintiff, but the overall recovery ($10,880) is not a substantial amount. In fact, in some jurisdictions, it’s at or nearing the small claims amount. Given that plaintiffs are not likely to get a fee award, you wonder about the cost-benefit of this litigation from the plaintiffs’ side. Then again, it took a trial on the merits to get to this stage. Often, the threat of litigation alone is sufficient to cause a defendant in this position to want to settle. Copyright small claims court is an idea that’s often floated. This litigation is a good data point in favor of one.