May 7, 2022 · by Eric Goldman · in Content Regulation, Derivative Liability, Licensing/Contracts

In July 2021, Trump sued Twitter, Facebook, and YouTube for terminating/suspending his accounts. At the time, I made a 6-step prediction for how the lawsuits would go: 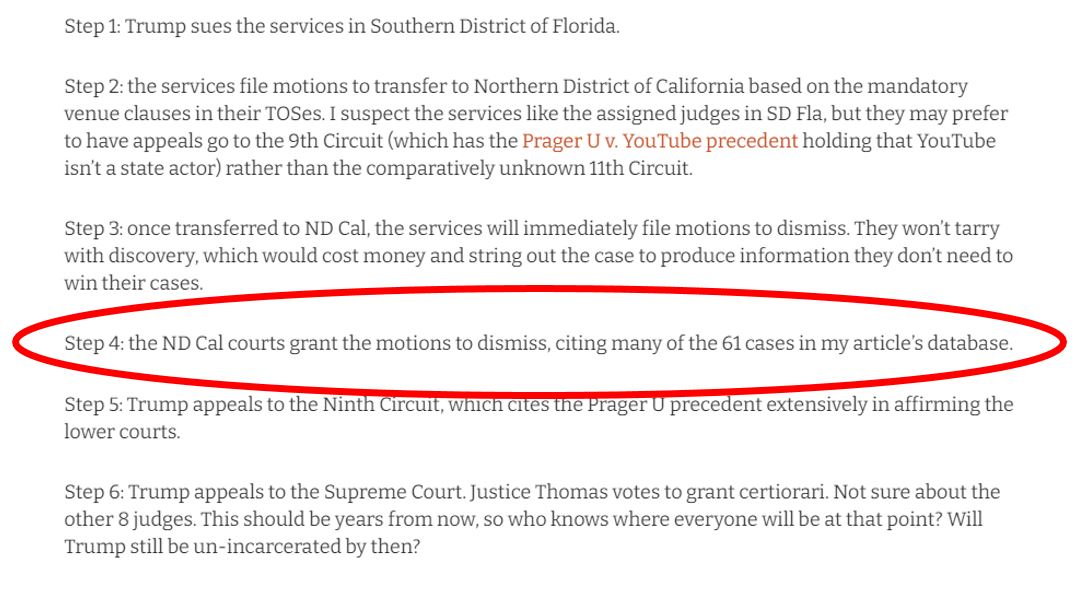 Step 3 in the Twitter case, the transfer from Florida to California, occurred in October 2021. Now, to no one’s surprise, Judge Donato dismissed the Twitter case (Step 4 of my prediction). After Trump’s futile attempt to amend the complaint, it will be onto Step 5.

The opinion itself is plain-spoken, precise, and devastating:

“Twitter is a private company.” (Cites to Williby v. Zuckerberg and Halleck). Trump argues that Twitter is nonetheless a state actor. The court replies: “This is not an easy claim to make, for good reasons.” Though the applicable legal standards are malleable, “the facts alleged in the amended complaint are not nearly enough for plaintiffs to proceed on a state action theory.”

With respect to legislative jawboning:

the comments of a handful of elected officials are a far cry from a “rule of decision for which the State is responsible.” Legislators are perfectly free to express opinions without being deemed the official voice of “the State.” Government in our republic of elected representatives would be impossible otherwise. It is also not plausible to conclude that Twitter or any other listener could discern a clear state rule in such remarks, or even determine what a legislator’s “preferred views” might be….There is no way to allege with any degree of plausibility when, if ever, the comments voiced by a handful of members of Congress might become a law, or what changes such a law might impose on social media companies like Twitter….Much of what plaintiffs challenge fits within the normal boundaries of a congressional investigation, as opposed to threats of punitive state action.

Plus, the complaint alleges that Twitter closed the various named plaintiffs’ accounts for different reasons, and “these explanations indicate that Twitter acted in response to factors specific to each account, and not pursuant to a state rule of decision.” Also, some of the statements cited in the complaint weren’t from actual government officials, relate only to Facebook, or weren’t actually threatening.

The court distinguishes the Twitter jawboning from precedent cases of actual government censorship because:

In each of the cases, a concrete and specific government action, or threatened action, was identified. Here, plaintiffs offer only ambiguous and open-ended statements to the effect that “we may legislate” something unfavorable to Twitter or the social media sector. This is a world away from: (1) a state commission sending local police officers for drop-in visits and threatening prosecution by the state attorney general (Bantam Books); (2) a city mayor and police superintendent threatening law enforcement action to crack down on sit-in demonstrations (Lombard); (3) a deputy county attorney threatening prosecution against a private company under a specific law (Carlin); and (4) a federal administrative commission threatening the suspension of licenses or formal rulemaking if its specified elements for an anti-drug program were not followed voluntarily (Mathis).

[An aside: Team Trump made the “odd assertion” that Iqbal/Twombly heightened pleading standards  apply only in antitrust conspiracy cases. The court curtly responds that they’ve been applied in a wide variety of contexts, and “a scant minute of online research makes this abundantly clear.”]

“The government cannot plausibly be said to have compelled Twitter’s action through Section 230, which in any event imposed no affirmative obligations on Twitter to act in any particular way.” The court adds that the plaintiffs lack standing to challenge Section 230.

This claim is inapplicable because Twitter’s TOS said California law governs. The court also points out that Twitter’s “TOS gave Twitter contractual permission to act as it saw fit with respect to any account or content for any or no reason, which makes its ostensible motives irrelevant for a deceptive practices claim. ”

Only one of the plaintiffs was a Florida resident with a Twitter account when the law nominally took effect, plus the law has been enjoined in “a well-reasoned decision.”

This ruling is consistent with the dozen of other rulings dismissing lawsuits over account terminations and content removals. There was never any doubt that Trump or his team could not outperform the dozens of plaintiffs who have preceded him. Anyone thinking this lawsuit had any chance of success was delusional.

The court gives the plaintiffs a chance to amend their complaint, and I’m sure they will. But they’ve already taken their best shot, and none of the court’s rationales are unexpected or unanticipated. So the amended complaint will undoubtedly fail too. Then it’s onto the Ninth Circuit.

The question everyone wants to know: if Musk completes the Twitter acquisition, will Trump get his Twitter account back? Trump has said he doesn’t want it, which we all know is another lie; Trump would come back in a heartbeat if the price is right. Either way, if Musk owns Twitter, it will be his legal prerogative to change Twitter’s policies, and I will defend his legal freedom to exercise his editorial discretion as he sees fit.

However, if Musk allows Trump back on, the remaining Twitter employees will revolt. If they haven’t already left/been fired by that point, there will be an exodus en masse if Trump comes back. Musk cannot recruit equally talented replacements, so Musk will switch out Twitter’s employees from the A team to the B team–a process that will further drive Twitter into the ground. As the joke goes, how do you turn a billionaire into a millionaire? The old answer: buy an airline. The new answer: buy a social media company (see also MySpace and Tumblr).