Trump Has to Litigate His Must-Carry Lawsuit in YouTube’s Home Court–Trump v. YouTube

In July, Trump et al sued Twitter, Facebook, and YouTube in Florida for terminating his accounts. At the time, I laid out a 6-step prediction for how things would go: 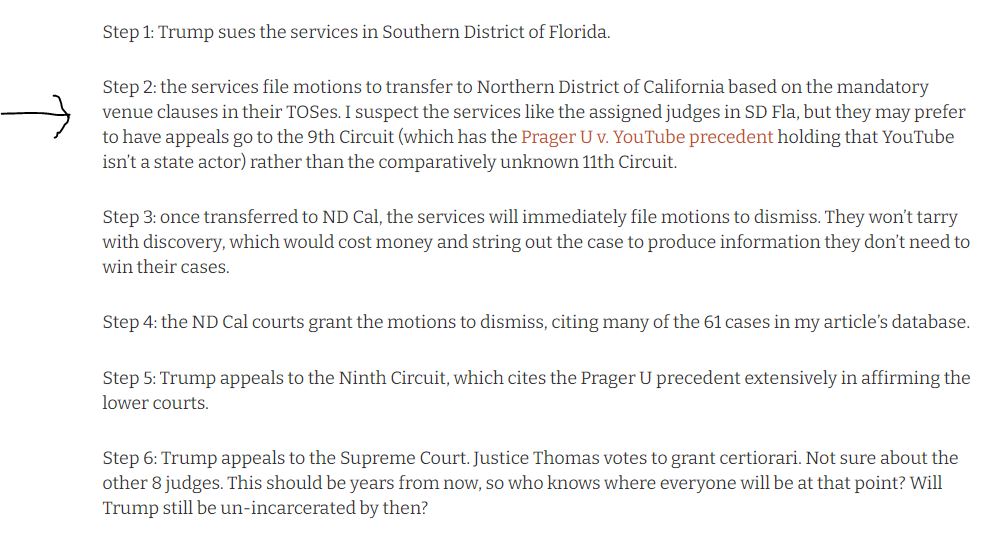 We’ve reached Step 2 in the YouTube case. Based on the mandatory venue in its TOS, YouTube sought to transfer the case to its home court, the Northern District of California. The Florida district court easily agrees with YouTube.

All claims arising out of or relating to these terms or the Service will be governed by California law, except California’s conflict of laws rules, and will be litigated exclusively in the federal or state courts of Santa Clara County, California, USA. You and YouTube consent to personal jurisdiction in those courts

This is really quite clear. To overcome this clause, Trump argued that the TOS doesn’t apply to Trump because he was president at the time of termination. (Yes, he really does believe he’s above the law). The court replies:

Trump cited his decisive loss in the Knight First Amendment v. Trump case. It’s interesting Trump brings that up, because he made the DOJ appeal that case on the grounds that he held his Twitter account as a private citizen, not as president of the United States. His position in this lawsuit (that he held his YouTube account as president) directly contradicts the legal position he had the DOJ adopt in the Knight First Amendment. ¯\_(ツ)_/¯ This is standard Trump-law; Trump is well-known for adopting inconsistent legal positions in and out of court. For example, recall that Trump relied on Section 230 in court while simultaneously trying to repeal it. In any case, the judge says the Knight First Amendment discussion is irrelevant to YouTube’s TOS.

Simply put, Plaintiffs have not cited to, nor is the Court aware of, any legal authority standing for the proposition that a former federal official is exempt from a forum-selection clause to which he agreed to in his individual capacity.

(One possible reason why the court didn’t find any such precedent is that it’s such an asinine argument that few lawyers would ever want to jeopardize their reputations making it).

Trump also argued that the case raised Florida-specific issues. The court shreds this argument too:

this case involves issues that are national in scope… First, although some Plaintiffs, including Plaintiff Trump, are in Florida, others are located around the country in Colorado, New York, and Washington, D.C. Second, YouTube is headquartered in California. Third, Plaintiffs are suing Defendants on behalf of a nationwide class. And fourth, Plaintiffs invoke the First Amendment of the U.S. Constitution to invalidate a federal statute.

With respect to the possible unconscionability of YouTube’s TOS, the court says “the bargaining power between social media companies and their customers does not render a forum-selection clause to be unconscionable.”

Onto step 3 of my 6-step prediction.

A reminder that Jess Miers and I documented 60+ similar cases that failed. The case’s future is not in doubt.