The plaintiff is Rogan O’Handley, a California lawyer with elite credentials (UChicago Law, practice experience as a corporate finance and entertainment attorney) who nevertheless jumped onto the anti-“elites” Trump train 🙄 and embraced Trump’s Big Lie that the 2020 election was stolen from him. (You’ll need some anti-nausea medicine to read this puff piece profiling him). O’Handley uses the online moniker “DC_Draino” (Drain the Swamp, get it?), and he had 400k+ followers at Twitter–until Twitter ultimately kicked him off for earning 5 strikes.

His lawsuit focuses on the interaction between two efforts to reduce election misinformation online. First, Twitter adopted a “Civic Integrity Policy” and created a “Partner Support Portal,” a fast lane for governments and other trusted sources to report problematic election-related tweets. Second, California established an Office of Election Cybersecurity (“OEC”) and contracted with a third-party vendor, SKDK, to monitor social media and identify problematic posts. 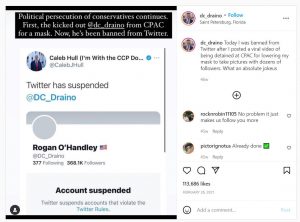 On Nov. 12, 2020, O’Handley questioned the legitimacy of California’s vote tabulation in a tweet. (Reminder: Biden’s margin of victory in California was 5M+ votes). SKDK flagged the tweet to the California Secretary of State’s office. An unspecified person in the office flagged the tweet for Twitter. Thereafter (maybe due to the flagging, maybe not), Twitter appended a fact-check to the tweet and issued O’Handley a strike. Following the January 6 insurrection, Twitter fact-checked three more O’Handley tweets, restricted those tweets’ virality, and issued 3 more strikes that led to a 7 day suspension. (Twitter’s 5-strike policy is more patient than I would be). After another O’Handley tweet endorsed the Big Lie, Twitter assigned the fifth strike and permanently suspended O’Handley’s account. It doesn’t appear that the non-Twitter defendants had flagged any of the January tweets for Twitter.

O’Handley sued Twitter, various California government employees, SKDK, and more for the fact-checking and suspension. The court rejects all of O’Handley’s claims.

To get around the state action bar, O’Handley argued that Twitter was a company town like Marsh. The court says Prager U expressly rejected that argument.

As another workaround, O’Handley argued that Twitter engaged in “joint actions” with state actors. But the only evidence of joint action was the single November 2020 report from the California Secretary of State’s office to Twitter, and that report “did not direct or even request that Twitter take any particular action in response to the tweet.” This is not enough to constitute joint action. “One party supplying information to another party does not amount to joint action…the one-off, one-way communication here does not reflect ‘substantial cooperation’ or the exercise of coercive power.” In addition, the government can work with a private entity without converting the private entity’s decisions into government decisions….there is no evidence or even allegation that the government played any role in Twitter’s ‘internal decisions’ to label O’Handley’s tweets, or to add strikes to and ultimately suspend O’Handley’s account.”

Twitter’s First Amendment Rights. As I and many others have said, it’s not “censorship” when Internet services decide that UGC isn’t fit for their audiences; but it sure is censorship when governments intervene into Internet services’ editorial decisions. The court tackles this issue head-on.

(An aside: O’Handley’s “combined social media following across all his accounts currently reaches over 3 million people and he has made 75 national news appearances in the last year and [a] half.” Twitter’s “censorship” of O’Handley has really hurt his ability to communicate with the public).

O’Handley contends that banning someone from a social media platform, or issuing a strike against his account, is like allowing military recruiters on campus—not a form of speech. But unlike an entity that organizes itself for non-expressive purposes, Twitter is “the primary social channel for political commentary and news in American society at present.” As O’Handley commented at the motion hearing, “on Twitter, all there is is discussion of issues.” Twitter’s decisions to include, exclude, or label a tweet on a site that is entirely a “discussion of issues” are expressive. As Twitter explained, it “expressed its negative opinions about the content of O’Handley’s tweets by labeling them as disputed and/or likely to cause violence,” and it expressed its “view that O’Handley’s particular tweets were not appropriate for sharing on its platform” by suspending O’Handley’s account.  These decisions operated “together with numerous decisions regarding other tweets and users to more broadly shape and develop the nature, tone, and substance of the ongoing dialogue that Twitter seeks to foster and present on its platform.” That is expression.

O’Handley disagrees, arguing at the motion hearing that no one would think that O’Handley’s tweets were Twitter’s speech, and that Twitter could simply have used its own Twitter account to express its disagreement with O’Handley. But a Twitter user encountering O’Handley’s tweets would indeed think that Twitter is the kind of place that allows such tweets on its platform. A user who encountered enough such tweets might think that Twitter was content to be complicit in spreading election misinformation. This is because a platform’s decision to publish or not publish particular tweets says something about what that platform represents. The notion that Twitter should be powerless to do anything but post its own tweets responding to every tweet on its platform that spreads misinformation makes very little sense from either a legal or practical perspective…

Twitter has important First Amendment rights that would be jeopardized by a Court order telling Twitter what content-moderation policies to adopt and how to enforce those policies. The Court will issue no such order.

I don’t understand how so many folks can, with a straight face, espouse the counterfactual argument that Internet services aren’t making expressive choices as publishers. The bolded language all seems so obvious to me.

The court expressly sidesteps Twitter’s eligibility for Section 230 protection. This isn’t unusual. As Jess Miers and I documented last summer, less than half of the account termination cases turn on Section 230.

Claims Against State Defendants. The court says O’Handley can’t trace his injuries back to any government actions: “The Court would have to conclude that Twitter’s decision to suspend O’Handley’s account for violating its Civic Integrity Policy stemmed from the State’s flagging of a single O’Handley’s post three months earlier, rather than from Twitter’s application of its own Rules.” SKDK is even more remote from the suspension, because it only flagged O’Handley’s tweet to the OEC.

Implications. This is an important free speech ruling in at least three ways:

← Section 230 Preempts Claims Against Omegle–M.H. v. Omegle
Catching Up on Recent FOSTA Developments (None of Them Good) →
Subscribe to Blog via Email
Categories