RFK Sr. was beloved and well-regarded. He had the Kennedy magic and benefited from the Camelot fairy tale. His son, on the other hand…well…. Robert F. Kennedy Jr. founded and runs the Children’s Health Defense (CHD). CHD is an “advocate for complete candor as to the risks of environmental toxins, vaccines, 5G and wireless networks, and the conflicts of interest that have compromised government oversight of those products and services.” Some might consider it an anti-vax organization or conspiracy theorist.

Starting January 2019, Facebook started cracking down on CHD’s pages. It placed fact-checks on some CHD content, such as this: 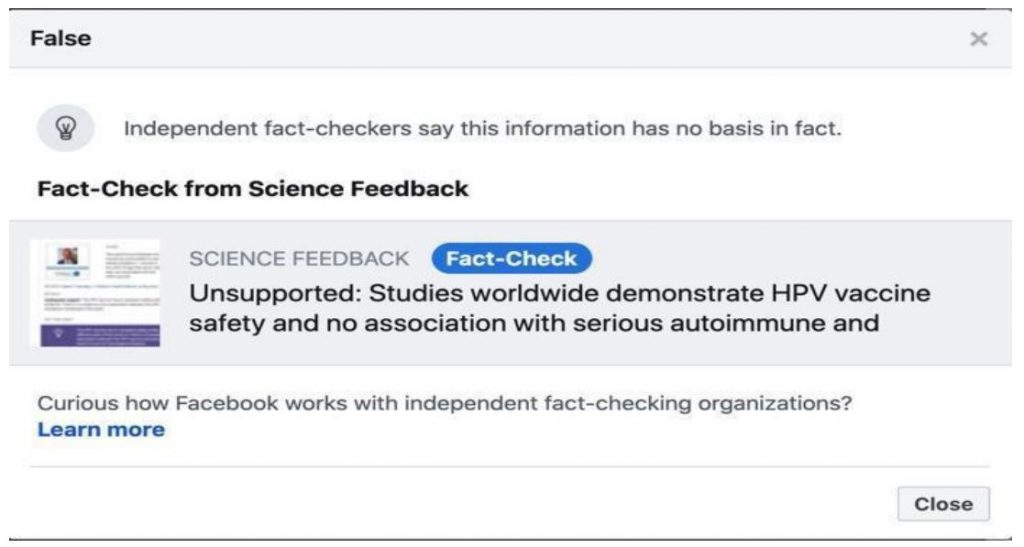 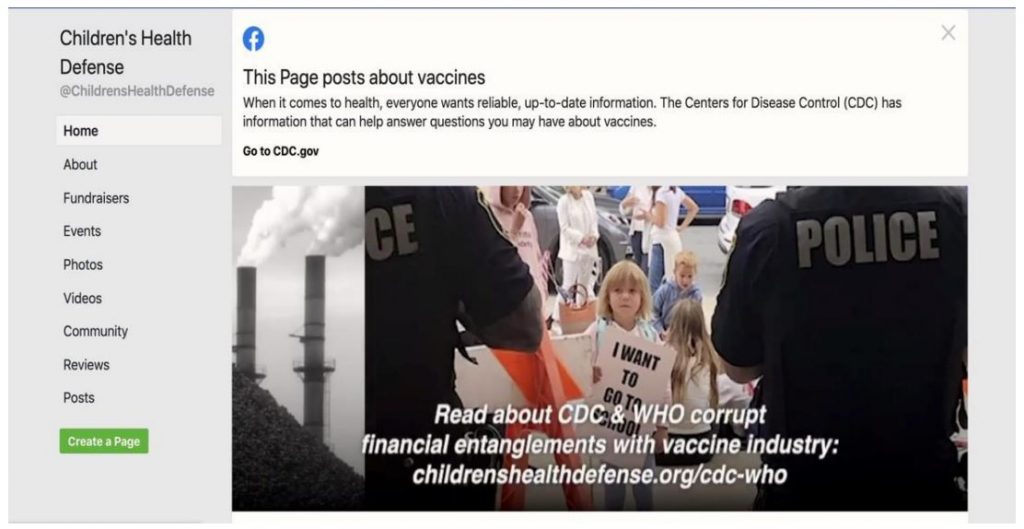 Nevertheless, CHD sued Facebook in a variation of the garden-variety lawsuit seeking to prevent Internet services from “censorship.” The plaintiff’s legal team includes Jed Rubenfeld, who has more time to work on prosaic litigation matters while he is suspended from Yale Law School. Rubenfeld wrote an op-ed suggesting he had the cleverest way to eviscerate Section 230. To Rubenfeld’s credit, he actually tries out his op-ed theories before a judge. Any guesses what kind of “grades” Yale Law professors earn when judges actually review their characterizations of the law?

Rights Deprivation by Facebook. “plaintiffs may not pursue Bivens actions against private entities.”

Rights Deprivation by Zuckerberg. Basically, the court has to explain why Mark Zuckerberg isn’t engaged in state action. Because apparently it’s not self-evident. FFS.

First, everyone knows that Zuckerberg, currently worth over $100B, does not do day-to-day content moderation. The court nevertheless must find a legal hook for that obvious proposition. The court says:

CHD is required to allege facts showing that Zuckerberg actually participated in, directed, or approved any of the alleged constitutional violations. At best, CHD has alleged that Zuckerberg has made general statements about removing “misinformation that has the potential to lead to imminent or physical harm” and discouraging “anti-vaccine” content on Facebook, and that “on information and belief” Zuckerberg met with Congressman Schiff to discuss the issue of vaccine misinformation on Facebook’s platform. CHD speculates that Zuckerberg and Schiff discussed “specific standards” that would be used to identify and censor vaccine “misinformation,” and CHD speculates that “Zuckerberg and/or the Doe defendants either read CHD’s March 4, 2019 letter or rejected it without reading.” None of these allegations contain facts showing personal involvement by Zuckerberg in deciding to post the warning label on CHD’s Facebook page, the decisions to post fact-checks to particular CHD posts, or the decisions to “demonetize” or “shadow-ban” CHD.

Second, Zuckerberg hasn’t been secretly turned into a state actor. CHD argued that Zuckerberg was in league with the WHO, the British government, and various government-supported nonprofits. The court says none of those entities are the federal government, so who cares what collaborations Zuckerberg has done with them?

As for the CDC, the court says:

general statements by Zuckerberg, Facebook, the CDC, or other entities within the federal government about “working to remove misinformation” [do] not support the inference that Facebook (or Zuckerberg) worked in concert with the CDC to censor CHD’s speech, retaliate against CHD, or otherwise violate CHD’s constitutional rights.

Instead, “what CHD has plausibly alleged is that Facebook created its own algorithms and standards for detecting ‘vaccine misinformation,’ and that in doing so, Facebook may have relied on CDC information about vaccines to determine what information is ‘misinformation.’ That is not enough to show that Facebook’s actions were ‘compelled’ by any particular CDC ‘standard of decision.'”

CHD says Rep. Schiff’s ill-advised February 2019 exhortation to Facebook to do more against vaccine misinformation turned Facebook/Zuckerberg into state actors. Schiff’s letter has been cited by several plaintiffs, and courts have found it far less legally consequential than plaintiffs hope. Here, the court says “nowhere in the letter does Rep. Schiff direct Facebook to adopt any specific standard to follow when it determines what speech constitutes vaccine misinformation or whether particular posts are false or misleading…None of the general statements or questions in Representative Schiff’s letter can be interpreted as providing a specific standard of decision that mandated the particular actions that Facebook took with regard to CHD’s Facebook page.”

Rep. Schiff also ill-advisedly suggested he would reform Section 230 if he wasn’t satisfied with social media’s progress to combat vaccine misinformation. (Among the reasons why Schiff adopted a stupid negotiating posture: Section 230 reform could very well backfire and produce MORE vaccine misinformation or reduce the overall availability of ACCURATE vaccine info. Be careful what you wish for). The court says the threat wasn’t specific enough to constitute coercive action. Related exhortations from Rep. Pelosi were also too “general and amorphous.”

For more about Congressional jawboning, see this February post.

The court summarizes: “CHD has failed to allege specific facts showing that Zuckerberg, or indeed anyone at Facebook, jointly acted with the federal government when Facebook took various actions regarding CHD’s Facebook page.”

CHD also tried the mockable argument that Section 230’s immunity turns immunized entities into state actors. This argument failed in Divino, and it failed again in the uncited Newman case. The court says “the immunity provided by Section 230 does not provide sufficient ‘encouragement’ to convert Facebook’s private acts into state action.”

Lanham Act. CHD claimed the warning labels and fact-checks steered CHD’s consumers towards vaccines, which injured “its ‘messaging’ about vaccines and 5G technology.” The court is like, so…? The labels/fact-checks aren’t disparaging CHD’s goods/services or promoting anyone else’s goods/services, so they are not covered by the Lanham Act. “[A]ll of the alleged misrepresentations…are simply providing information, albeit information with which CHD disagrees.” Cites to Maffick v. Facebook and Prager U. v YouTube. The court also cites a bunch of cases that the Lanham Act doesn’t cover competition in the “marketplace of ideas.”

RICO. It’s never civil RICO. Here, “CHD has not alleged any facts showing that defendants engaged in a fraudulent scheme to obtain money or property from Facebook visitors to CHD’s page.”

Implications. The court grants the motion to dismiss with prejudice. Onto the 9th Circuit.

This is a 45 page opinion filled with highly technical statement about the law. These kinds of opinions, though an appropriate format for resolving litigation, unfortunately obscure the real matters at issue. CHD wants the court to guarantee it has unrestricted freedom on Facebook to publish dubious, and possibly outright wrong, statements that can exacerbate public health crises. Instead of pulling the plug on CHD, Facebook gave them the ability to keep publishing their content, but with some lesser set of rights than other authors. CHD says “thanks” for not ditching them by bringing an easily dismissed and embarrassingly mockable lawsuit.

If anything, Facebook has been far too gentle with CHD. Facebook already has too much conspiracy theorist and vaccine misinformation content on its site, so CHD should feel lucky it hasn’t gotten chucked (yet). Maybe the judicial spanking will prompt CHD to take a hard but much-needed look in the mirror and ask itself whether it’s part of the solution or part of the problem.