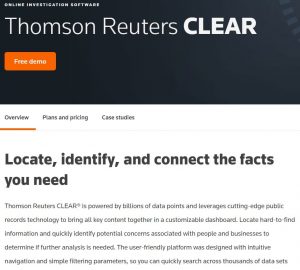 TR also argued that the plaintiffs don’t make a commercial endorsement via their dossiers. The court agrees but says that’s not required:

The last sentence contained how many negatives? Stuffing more than two negatives into a sentence is a yellow flag of judges trying to reach a strained outcome.

This is shaping up to be a really troubling publicity rights precedent, but the court eventually turns it around. The court questions how TR uses the plaintiffs’ identity for promotional purposes:

Plaintiffs allege the product is their name, likeness, and personal information. Plaintiffs do not cite a single right of publicity case with analogous facts. Although the publishing of Plaintiffs’ most private and intimate information for profit might be a gross invasion of their privacy, it is not a misappropriation of their name or likeness to advertise or promote a separate product or service.

That distinguishes the case from Perkins and Fraley, where the users’ identity was displayed in the ads:

The use of a person’s name and likeness to promote a product (other than that which pertains to the person themselves) is the essence of an “appropriation” of one’s name or likeness. No such appropriation is alleged here; unlike Perkins and Fraley, Plaintiffs’ name or likeness in this case were not sent to unsuspecting CLEAR users to advertise or promote the CLEAR platform or some other third party’s products or services; they were sent only to CLEAR subscribers who deliberately paid Thomson Reuters to receive information about them.

TR argued that the CCPA authorized its dossier sales because the CCPA permits data sales unless consumers opt-out. This argument goes over poorly:

the harm to Plaintiffs is tremendous: an all-encompassing invasion of Plaintiffs’ privacy, whereby virtually everything about them—including their contact information, partially redacted social security number, criminal history, family history, and even whether they got an abortion, to name just a few—is transmitted to strangers without their knowledge, let alone their consent…CLEAR dossiers may deeply damage Plaintiffs by directly contravening their right to keep private their most intimate and personal information….The unauthorized dissemination of virtually every piece of Plaintiffs’ personal information on the CLEAR platform may constitute a severe invasion of privacy.

TR argued that it only republishes already-published information. The court responds that TR allegedly advertises CLEAR by promising access to unpublished and inaccessible material; and its data aggregation would be a problem to the court even if TR is right:

compiling bits of Plaintiffs’ personal information scattered throughout the internet (and allegedly in non-public sources) into a dossier is a significant invasion of privacy because it is much easier to access that information in one place. Otherwise why would CLEAR subscribers pay to access the dossiers? That some of Plaintiffs’ personal information on the CLEAR dossiers comes from publicly available sources does not diminish the significant harm Plaintiffs suffer from the sale of that compiled information to whomever is willing to pay for it.

Unfortunately, the judge backs this up with citations to harms caused by government-created dossiers. Conflating government invasions of privacy with private sector activity is a common but categorical error, and it undermines the credibility and persuasiveness of the judge’s analysis.

The court says equitable relief for the unfairness claim is possible because “the injury here is an invasion of privacy that can never be fully remedied through damages.”

Section 23o. Consistent with its discussion about publicity rights, the court thinks TR is publishing first-party content, not third-party content: “Plaintiffs are not seeking to hold Thomson Reuters liable ‘as the publisher or speaker’ because they are not asking it to monitor third-party content; they are asking to moderate its own content.” In other words, the court treats TR as the dossiers ICP: “Here, there is no user-generated content—Thomson Reuters generates all the dossiers with Plaintiffs’ personal information that is posted on the CLEAR platform…It is nothing like the paradigm of an interactive computer service that permits posting of content by third parties.”

Remarkably, the court doesn’t cite the Accusearch case, which also denied Section 230 protection for data brokerage (in that case, pretexted phone records). Accusearch is distinguishable because the illegal content was generated after the sale, but it would have been closer to the court’s twisted Section 230 interpretation. So the court isn’t even citing its strongest precedent!

Note that there are several cases involving the advertising of personal dossiers where Section 230 didn’t apply, either. E.g. Lukis v. Whitepages, Knapke v. Classmates. The court implicitly distinguished those in the publicity rights discussion because they are closer to the cited Perkins and Fraley cases.

Anti-SLAPP. The court says CLEAR might not be a public forum because it’s paywalled, which might mean it’s not generally accessible to the public. Either way, “the unauthorized sale of people’s most personal and private information is not a matter of public interest, particularly when the information pertains to any individual regardless of whether they are a public figure or person of interest to the public.” Plus, the paywall degrades the likelihood the information informs public concerns: “that Thomson Reuters only shares Plaintiffs’ personal information with its CLEAR subscribers who specifically pay for it, and not with the general public, cuts heavily against concluding that Thomson Reuters’s conduct is of public concern.” Thus:

the sale of Plaintiffs’ personal information cannot be fairly characterized as journalistic. It is hard to conceive how the public has any interest—let alone a compelling interest protected by the First Amendment—in the raw personal information of every California resident, especially where it is not connected to a matter of public interest.

As many mainstream publications erect paywalls around socially vital conversations to prop up their business model, anti-SLAPP protection cannot turn on the presence of paywalls. This court’s suggestion otherwise could have dramatic consequences for anti-SLAPP law.

Implications. This is a troubling opinion because it is so clearly results-oriented. This court’s hostility to data brokerage is deep and unrelenting, and that creates multiple rough edges that could attract attention on appeal.

If this ruling survives appeal, it could become a foundational ruling limiting data brokerage. It suggests that 17200 UCL bans data brokerage despite the fact that California law clearly contemplates that data brokerage is legal. For example, the CCPA tolerates data brokerage, and there’s a scheme for data brokers to register with the state. The court’s handling of that obvious statutory conflict was unsatisfying.

The court reacted negatively to the comprehensive nature of the CLEAR dossier, but its reasoning doesn’t have a bright-line quantitative threshold. That invites the standard law professor slippery slope questions: how extensive must a dossier be to trigger the court’s antipathy? If the data broker is selling just one item of data, is that equally problematic? If not, why not?

The court’s treatment of Section 230 was also problematic. It highlights the ongoing doctrinal conflicts between Section 230 and privacy law. Judges may be increasingly open to prioritizing privacy over 230.

← When is it Fair Use to Use a Photo to “Illustrate” an Article?
Twitter’s Content Moderation Explanations Aren’t Defamatory Per Se–Isaac v. Twitter →
Subscribe to Blog via Email
Categories