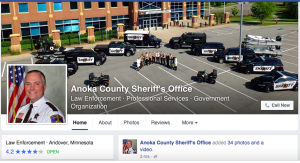 This is another case of an employee terminated for Facebook posts. Leah Palmer worked as a spokesperson for Anthony Palumbo, the Anoka County Attorney. Among her responsibilities were to serve as liaison between Palumbo and Sheriff Stuart (and other law enforcement officers). According to the ruling, Stuart was described by Palumbo as “prone to emotional outbursts”.

To my conservative friends decrying the violent riots in #Baltimore:

We live in a violent society:

The NRA says so—it’s one of their main tenants [sic] to supporting (read: pushing) conceal/carry and open carry laws.

We answer global violence with war and when we don’t, John McCain yells and stomps, and Ted Cruz says diplomacy is a waste of time.

Violence is okay in movies like Divergent, The Hunger Games[,] Transformers, and other PG-13 movies. But, if you throw sex in there, forget your PG-13 rating; it’s R. That sh*t’s not for kids, you know. (?!)

Call of Duty is not just for your average teenager and his X-Box. It’s also for training our soldiers.

The US spends 20 cents of every tax dollar on military and just 2 cents on education. You do the math.

So when youth in Baltimore who live in worse conditions than [*4] youth in Nigeria, finally break down in the face of police-sanctioned HOMICIDE, is anyone surprised that violence is the result??? According to the GOP that’s just business as usual in every other part of our society.

Sheriff Stuart was apparently offended by this post and told Palumbo that he could not work with Palmer if she harbored these views about the police. Palumbo met with Palmer, suggested she apologize to Stuart, and otherwise keep her personal Facebooking to a minimum. He also pointed to the county social media policy that had a clause prohibiting comments:

that might embarrass the Office or harm its work.

Palmer did as told and emailed Stewart expressing remorse. All appeared to be well. A few months later, however, Palmer linked to a Keith Ellison article titled “The Link Between Police Tactics and Economic Conditions Cannot Be Ignored.” She added the following comments:

I know I’m not supposed to talk politics anymore, but this opinion piece nails it. Please—no comments . . . but if you like it, share it.

The week after she posted this, Palumbo told Palmer he was firing her. He explained that there was no problem with her work product, but provided some other reasons (personality fit, inconsistent schedule, excessively informal demeanor). In a follow up meeting he provided other reasons but also questioned her judgment and her most recent Facebook post.

She sued, asserting among others, First Amendment claims. The court applies the Pickering balancing test and says she spoke out as a citizen on a matter of public concern. Thus, the burden is on the public employer to show actual or reasonably foreseeable disruption based on her statements. The court says this is easily satisfied in this case. Palmer herself acknowledged after the first post that it caused “damage,” and it was predictable that her second post would cause disruption given that it was political in nature and off limits:

Palmer’s second post also created an actual disruption of the relationship between Palmer and Palumbo and a reasonably foreseeable disruption between the Office and Sheriff Stuart and his deputies. After expressly acknowledging that she was “not supposed to talk politics anymore,” Palmer defied her boss’s instructions and “talked politics”—endorsing an article that criticized police officers such as those whom Palumbo represents and the political party to which many thousands of Palumbo’s constituents belong. At a minimum, Palmer showed terrible judgment.

I go back and forth on this case. On the one hand, the result is hard to disagree with, given that the plaintiff was a spokesperson who represented someone who worked closely with law enforcement. She did not show great judgment in posting after being instructed to not post. Just as a matter of protocol alone, she should have cleared any doubts with her boss first.

On the other hand, the second post showed some restraint and only linked to (and provided a snippet from) an article that could have offended Palumbo’s constituents. (The court does not discuss whether it was posted just to friends or more broadly available).

Disruption resulting from offensiveness is notoriously vague as a metric for when someone should be fired for speech. The policy itself speaks to “embarrassment” which adds little specificity. As Eric notes, the “policy” is certainly subject to a facial challenge on First Amendment grounds. (Interestingly, if she had challenged the policy, rather than posting, she may have achieved a different result.) For his part, Sheriff Stuart appears thin-skinned. Given how integral Facebook is in the fabric of daily life for some, this is probably the equivalent of Palmer being prevented from talking politics with her friend in a bar.

In the meantime, as we’ve repeatedly noted, it’s trivially easy for private employers to fire employees for Facebook posts, and public employees have not had much luck challenging their terminations either.

Eric’s comments: Like Venkat, I am sympathetic to Palmer’s side of the story. First, the county’s so-called social media policy (which I’m not sure was even published) was a joke. A prima facie First Amendment challenge to the policy would almost certainly succeed. Second, at least some of Palumbo’s termination justification sounded pretextual. Was the firing based on the social media policy or not? He said she did good work and offered to write her a positive reference. If so, it’s confusing if Palumbo ever explained fully exactly what prompted the firing. Third, as Venkat notes, Palmer’s second post was pretty gentle. If that post alone had been the basis of the firing decision, it seems like an overreaction. Finally, the court denigrates Palmer’s expertise on police violence, but I think her position gave her substantially more expertise to talk about that major social issue than the average lay person. We’ve discussed before that it’s rare for the public to hear criticism about the inner workings of police departments, so any such perspectives coming from the inside naturally become important social matters.

However, unlike Venkat, I strongly think the court reached the right result for two reasons. First, as a spokesperson, Palumbo’s constituents naturally are going to attribute her words to him. That doesn’t mean she can’t voice dissent, but any time she planned to take a public position that conflicted with her boss’ position, she needed to tread extra-cautiously. Though her acknowledged her speech limits in her second post and only ratified third party content rather than offering her own opinions, I think the second post rattled the nerves of some of Palumbo’s key constituents–especially in light of her first post. Second, Palumno needs to have unshakeable trust in his spokesperson, and I can see why Palumbo would no longer trust her to speak on his behalf after the second post. Because the second post irreparably broke the required trust between employer and employee, I can’t see how Palumbo and Palmer could effectively work together after her second post. Not only was her firing inevitable, but it was justifiable to me.