Court Rejects TCPA Claim on the Basis of Implied Consent 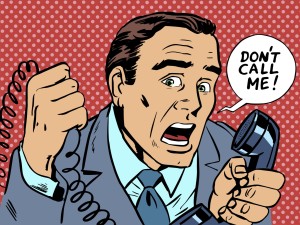 do not call me male phone stress. The subscriber spam work // studiostoks / shutterstock

Plaintiff sued on behalf of a putative class, alleging that he received marketing messages from Five Stars Loyalty that violated his rights under the TCPA.

Plaintiff had lunch at a Flame Broiler restaurant and asked the cashier about the Five Stars logo he noticed on the window. The cashier asked for plaintiff’s telephone number, swiped a card and handed it to plaintiff. Shortly thereafter, plaintiff received the following “welcome” text message from Five Stars:

Welcome to Five Stars, the rewards program of Flame Broiler. Reply with your email to finish registering and get free pts! Txt STOP to unsubscribe.

The court says that plaintiff consented to receive the message and therefore his claim fails.

The message is not an advertisement: The key question is whether the text message constituted an advertisement, in which case prior written consent is required. If not, consent need not be written and can be implied by circumstances. The court cites to Chesbro v. Best Buy, a Ninth Circuit case holding that a call exhorting plaintiff to redeem Best Buy “Reward Zone” points constitutes an advertisement. (Blog post on the Chesbro case here: “9th Circuit Zings Best Buy Over Robocalls – Chesbro v. Best Buy”.) The court contrasts the message in this case from the one in Chesbro, noting that the message here did not urge plaintiff to redeem any points, or direct him to a location where such points could be redeemed. Rather, the message was just a part of the overall registration process.

Consent can be implied: Given that the message was not an advertisement under the TCPA, consent can be implied, and turning over a telephone number without limiting instructions is sufficient to infer consent. This interpretation of consent is affirmed by the FCC’s most recent order (2015) interpreting the TCPA.

Retailers have to tread carefully when collecting information from a consumer. (See generally, the California cases dealing with the collection of personal information by retailers.) Nevertheless, it’s an activity retailers continue to engage in, and here, it appears that the plaintiff’s telephone number was sought not as a condition of sale, but in response to a question about a rewards program. As the court notes, this is one of many rulings holding that handing over your phone number without imposing an affirmative restriction equals implied consent to receive a text message. (See also Pinkard v. Wal Mart, a 2012 case dismissing TCPA claims based on implied consent.) That plaintiffs sued over this message is a testament to how risky text messaging is as a marketing channel.

The court’s efforts to distinguish Chesbro is worth noting. The distinction between advertising and non-advertising content comes up often, and the court takes a common sense-based approach here. This issue has come up in the junk fax context as well, as noted in this blog post on Sandusky v. Medco.