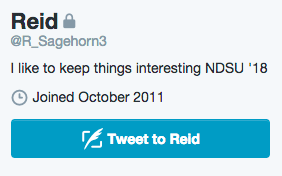 Plaintiff was an honor student and athlete at Rogers High School, with no previous disciplinary record. In response to a tweet from an anonymous Twitter account (Roger Confessions) asking whether “[plaintiff] actually made out with [name of female teacher at Rogers”],” plaintiff responded:

Apparently, a parent viewed the tweet and called the school. The principal investigated and decided that discipline was in order. It appeared that school administrators did not allege that the tweet caused any disruption, and plaintiff said he intended the tweet to be taken as a joke.

The principal decided to suspend plaintiff for five days because plaintiff allegedly “damaged a teacher’s reputation”. The specific offense cited was the “threatening, intimidating, or assault of a teacher, administrator, or staff member.”

Plaintiff’s parents called to complain and request a follow-up, but the principal reacted even more negatively to this, saying that the teacher decided to extend the suspension. Plaintiff’s mother tried to pursue remedial options with respect to the suspension but got nowhere. In fact, a police officer left a message for plaintiff’s mother, saying that he forwarded the postings in question for further review and a decision about whether to charge plaintiff with any crimes. [!!!]

Plaintiff sued school administrators and police officers, alleging First Amendment and due process violations. He also asserted a claim for defamation. Apparently, the police chief went to the media, to justify treatment of the plaintiff, not bothering to conceal his identity, and equating plaintiff’s speech to:

yelling “Fire!” in a crowded movie theater or saying “I got a bomb!” on a plane.

Defendants moved for judgment on the pleadings. The court largely denied the motion.

First Amendment Analysis: The First Amendment analysis is fairly straightforward. Somewhat shockingly, defendants tried to argue that the tweet in question was unprotected because it was obscene. The court says that even assuming the underlying tweet was obscene (which seems like a serious stretch), plaintiff’s own response (“actually yes”) cannot be considered obscene. (The court contrasts the speech here with the student’s speech in Rosario v. Clark County School Dist.)

An alternate ground to justify the expulsion was satisfaction of Tinker’s substantial disruption test. The court questions whether the speech bears enough of a connection to the school in the first place, given that it occurred off-school grounds via a third party website (Twitter). Even assuming a sufficient connection to the school, the court says plaintiff alleges that his tweet did not cause any disruption. (And none was cited in any of the disciplinary findings written up by the school.)

Due Process: The court says plaintiff adequately states a due process claim because he was not given a hearing before he was disciplined. The school defendants tried to argue semantics around the label ascribed to the discipline imposed on the plaintiff (expulsion versus withdrawal) but this does not sway the court.

Defamation: The court also rejects the police chief’s attempt to have the defamation claim dismissed. His arguments centered around particularity of the allegations and the fact that he did not identify plaintiff by name, but neither of these are viable arguments.

#fail . . . It’s possible that later factual developments will reveal evidence that makes the defendants’ conduct appear remotely reasonable. More likely, it’s tough to foresee defendants rehabilitating their actions here. They grossly overreacted in making the disciplinary decision in the first place and compounded their error at every turn. They should have stopped digging, and tendered a check along with an apology from the outset.