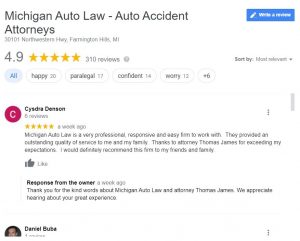 The majority says: “as a matter of law, a one-star wordless review posted on Google Review is an expression of opinion protected by the First Amendment.” In part, that’s because Google Reviews may always be “purely” the poster’s opinions. Thus, it doesn’t matter if Doe 2 was, in fact, a malicious competitor: “regardless of Doe 2’s true identity, this does not alter our conclusion that a one-star wordless review on Google review is an opinion, even if it violates Google’s policy.”

The plaintiff argued that the context of Google Reviews created an expectation that reviews of attorneys will be made by clients. The majority disagrees: “Because Google’s policy does not limit a poster’s experience to an attorney-client experience, it could reflect any experience with plaintiffs, including their website, physical location, blogs, in-court interactions, or appearance.” Apparently, that means the rating could have been based on truly anything, even political debates (remember how the Red Hen restaurant in Virginia got hammered?) or elementary school grudges.

The dissent thinks the rating implied that Patrick Anderson rated the lawyer as a client of the plaintiff; “a reasonable reader would believe that the reviewer had an actual experience with the firm, and that the negative review was premised on true, first-hand information.” By linking the standard to reasonable readers, the dissent would make it a jury question that’s not normally resolvable on a motion to dismiss. Thus, Doe 2’s identity matters to the dissent’s evaluation. “If the Google poster was not a bona fide consumer of legal services but instead created the review to enhance his or her own economic interests, or solely to damages plaintiffs’, those omitted facts would support a defamation claim.” For this reason, the dissent supports discovery of Doe 2’s identity.

As you can see, the majority and dissent disagree fundamentally about what a reasonable reader expects at Google Reviews. Per the dissent’s reading, the readers expect some professional basis for rating and reviews; while the majority thinks that reasonable readers expect to find only non-actionable opinions at Google Reviews. Over the past 15 years, most courts have taken the majority’s approach, dramatically raising the standards for what constitutes potentially actionable consumer reviews. And, with respect to the facts in this case, I don’t think many courts would accept the idea that a single star rating at a consumer review service ever could be defamatory, no matter who left and how malicious their intent was.