In October 2010, Robert Lee needed a dentist, pronto.  He didn’t realize he needed a copyright lawyer to help him pick a dentist.

In search of urgent pain relief, Lee contacted Dr. Stacy Makhnevich (a preferred provider under Lee’s insurance plan).  Dr. Makhnevich’s office required Lee to sign a “Mutual Agreement to Maintain Privacy” before it would treat him.  This agreement–based on a form contract sold by a North Carolina company called Medical Justice–prohibits patients from posting online reviews of the dentist; and if the patient does write a review, the agreement says the dentist owns the review’s copyright.  In exchange, the dentist promises not to ask the patient if it can sell the patient’s name to marketers–a worthless promise, as HIPAA already requires the dentist to obtain patients’ permission before selling their information to marketers.  (Elsewhere, I’ve explained why I think asking patients to restrict their future reviews is unethical, probably illegal, and a bad business decision).

Lee just wanted dental services, and not surprisingly he wasn’t in much of a mood to negotiate the ownership of copyrights in works that Lee hadn’t even written yet.  So like hundreds of thousands of other Americans, Lee signed a Mutual Agreement to Maintain Privacy so he could get the dental services he urgently needed. 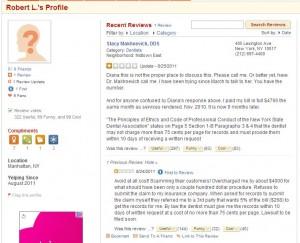 Lee didn’t fold under this pressure; instead, he sued the dentist to void the contract.  In a recent ruling, the court rejected the dentist’s attempt to dismiss Lee’s lawsuit.  The court didn’t conclude that Lee will win (that question hasn’t been raised yet), but the opinion isn’t good for the dentist.  The court frames the lawsuit in skeptical terms:

This lawsuit about a toothache and a dentist’s attempt to insulate herself from criticism by patients has turned into a headache. After appealing to his dentist for pain relief, Plaintiff Robert Allen Lee, ironically, is appealing to the court for relief from his dentist.

This ruling is particularly noteworthy because we almost never see legal battles involving the Mutual Agreement to Maintain Privacy.   When confronted with a doctor or dentist’s threats involving the agreement, most patients quickly back down and remove their online reviews.  In the rare situations where the patient doesn’t back down, some doctors and dentists acquiesce rather than test the contract’s strength in court.  This case got to court only because the dentist sought so aggressively to assert the contract rights and Lee decided to fight rather than fold.  Though we’ll have to see how this case turns out, the dentist probably made the wrong choice.

Despite Medical Justice’s credibility-defying flip, Medical Justice was so effective at persuading doctors/dentists to fear patient reviews that some doctors and dentists are still using the form agreement.  Should your doctor or dentist present with such a form, you don’t need to call your copyright lawyer.  Instead, refuse to sign the form, tell your doctor or dentist that the form agreement is unethical and probably illegal, and send them a copy of the recent ruling.  Or, tell the doctor/dentist that you’re going to take your business to a healthcare provider with more enlightened views about patient reviews.

If you’re a doctor or dentist wondering how to deal with patient reviews, elsewhere I’ve offered some suggestions.