Partial Screenshot Qualifies as Fair Use (on a Motion to Dismiss)–Yang v. Mic

We’ve blogged about a few cases involving screenshots of newspaper pages consisting of copyrighted photos, including Clark v. TransAlt and Hirsch v. Complex Media. This case adds to that canon, but not in a particularly enlightening way. The screenshot at issue included only about half of the photo, so it qualified as fair use as everyone (except for the plaintiff’ and his lawyer) thought it would.

The photo at issue depicted a man in a bar named Dan Rochkind. The NY Post licensed the photo for its story, “Why I won’t date hot women anymore.” As you can infer from the title, the vapid story bristled with sexism and possible misogyny. As a result, it sparked substantial criticism. Mic covered this criticism in a story, “Twitter is skewering the ‘New York Post’ for a piece on why a man ‘won’t date hot women.’” The Mic article included a screenshot of the NY Post article, including a portion of the licensed photo, at the top of its story: 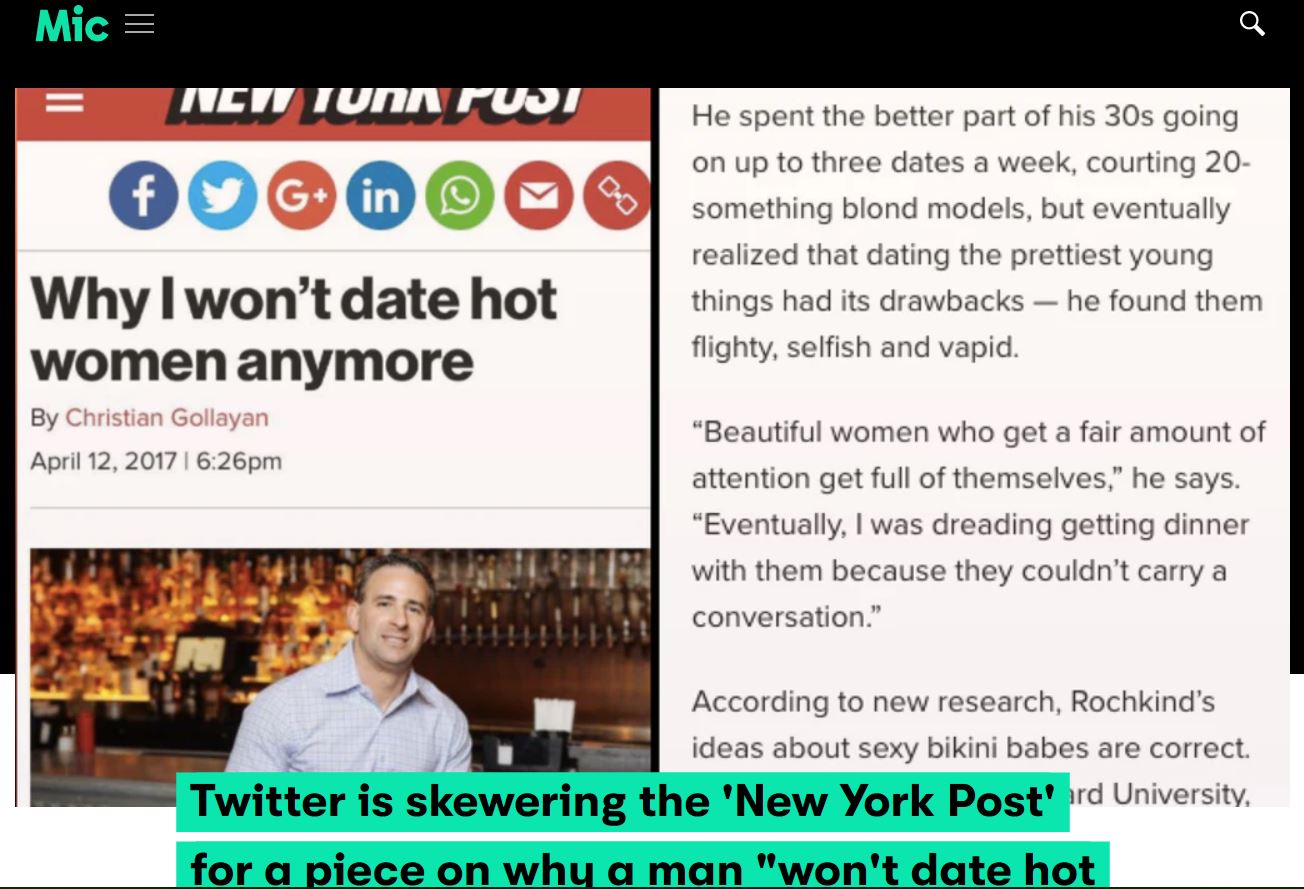 (Note: I have a screenshot of a screenshot containing a fair use portion of a photo. My Inception-level depiction surely qualifies for fair use too).

The court holds that Mic’s screenshot qualified as fair use:

Nature of the Use.  The screenshot was transformative because (1) it showed the readers what all of the fuss was about (cite to Barcroft v. Coed Media and Konangataa v. ABC), (2) it was “a vehicle for criticizing the Post Article and identifying it as the target of this criticism” (cite to Clark v. TransAlt) and (3) “it is transformative to take a photograph initially used to simply identify someone or show them in a positive light and use it in a critical manner” (cites to Katz v. Google, Weinberg v. Dirty World, Dhillon v. Does). On this third point, the court explains:

In the original, the posed photograph dominates the page, accompanied by text describing Rochkind as having “had no problem snagging the city’s most beautiful women” and praising his “muscular build and a full head of hair.” A reasonable viewer would interpret the Photograph in this context as placing Rochkind in a flattering, or at the very least neutral, light. In sharp contrast, the Screenshot in the Mic Article shrinks the Photograph considerably, and places it alongside text in which this “insufferable private equity executive” is mocked for everything from his appearance to his personality. This use alters the original message of the Photograph, dramatically altering the light in which it is framed and the message it conveys.

The court says that defendant made a commercial use because it is a for-profit publisher that used the photo to drive traffic, but that consideration is less important when the activity is transformative. Also, the complaint could show evidence of bad faith because “Defendant cut off part of the Photograph, removing the label crediting the work to Plaintiff.” Nevertheless, the first factor weighs in favor of the defense.

Nature of the Work. The court isn’t sure what to do with this factor.

Amount and Substantiality of Portion Taken. The photo was “significantly cropped,” and that means it was likely “a reasonable use of the Photograph to achieve the purpose of both identifying the object of controversy and satirizing the Post Article and Rochkind.”

The plaintiff unsuccessfully argued that Mic could have done other things, such as:

Market Effect. “In light of the cropped and composite manner in which the Mic Article presents the Photograph, it is implausible that potential purchasers would opt to use the Screenshot rather than license the original Photograph.”

Because this case practically screamed “FAIR USE,” the court grants Mic’s motion to dismiss. Successful motions to dismiss based on fair use are good candidates for 505 fee shifts to the defendant.

BTW, in case it wasn’t obvious who thought this was a worthwhile case to bring, the answer is Richard Liebowitz.