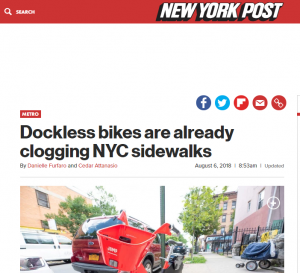 The photo at issue depicts a dockless bike on a sidewalk. The New York Post published an article on dockless bikes and included the photo. You can get a sense of that story from my screenshot of the NY Post article at the right. However, I deliberately did not include the whole photo for risk management reasons, even though seeing the whole photo and newspaper page would be more helpful to you. The court never says that the NY Post had proper licenses to the photo, but it’s implied that it did, and it wouldn’t matter to the results either way.

Shortly thereafter, the Daily Bike Forecast blog wrote a blog post criticizing the NY Post article. It appears the blog drops posts after a few months, so I couldn’t find the blog post online (otherwise, I would have included a screenshot of it!). The blog post included a screenshot of the NY Post’s article, but only the headline, byline and photo (similar to my screenshot at the right, though I presume it included the entire photo instead of my cropped depiction). The blog post then fisks the NY Post article, pointing out that the photo provides evidence contradicting the article text (as you might infer from my screenshot, the bike in the photo didn’t actually block the sidewalk despite the headline’s “clogging” claim).

This turns out to be an easy fair use case–so easy that the court grants it on a motion to dismiss, something that is not common.  The judge says:

Purpose of Use. “TransAlt’s use of the Photograph in the Screenshot emphasizes the humorous incongruity of the Post’s decision to run the Photograph directly below the Post Article’s headline, even though the Photograph in fact appears to refute the headline’s assertion,” which is “a sly barb at the Post’s sloppy journalism.” The court adds:

For the purpose of a satiric commentary on the quality of the Post’s reporting on this subject, the Post Article and the Photograph were inseparably connected. Not just any other picture of any other dockless bicycle subsequently taken would have suited the thematic and illustrative critique that the TransAlt Article sought to express. …

The TransAlt Article did not have an alternative option for visually expressing the point that the Screenshot drives home by showing that the Post placed the Post Article’s headline and the Photograph right next to each other despite their incongruity. In this respect, the TransAlt Article’s use of the Photograph constitutes an expression of the author’s perception of basic flaws in the Post’s coverage of the topic. The Photograph as a standalone image, or a different photograph of a dockless bicycle, would not have sufficed.

Nature of Work. The photo has “a modicum of artfulness,” but this factor isn’t that important.

Amount Taken. The screenshot included the whole photo, but it needed to do that to make its point. “Clark’s argument — that TransAlt could have commissioned a different photograph of a dockless bicycle, licensed the Photograph, or used no photograph at all is entirely meritless, insofar as it would have produced impractical results: either stifling the TransAlt critique altogether, or requiring its publication with a photographic image that may not have adequately communicated the intended point, and thus not have served the author’s purpose. The Screenshot showed the Photograph as used in the context of the Post Article to highlight the Post’s decision to place this particular photograph directly alongside the Post Article’s headline.” As you can see from my cropping to include less than 100% of the photo, it doesn’t confirm that the sidewalk is clear, though the entire photo does make that clear. So I think it’s impossible to crop this photo and still support the blogger’s claim.

The court concludes by implying that maybe this lawsuit is part of a litigation factory: “Clark’s arguments so fail to track the facts of this case that they read as if taken from briefing in litigation over an entirely different fact pattern.” This probably plays a non-trivial role in the court’s willingness to find fair use on a motion to dismiss. Given the tenor of this ruling, I expect that the court will award a 505 attorneys’ fee shift if the defendant asks for it, in which case this lawsuit will be an expensive mistake by the plaintiff.

This ruling reaches the sensible inclusion that screenshotting a newspaper headline and photo, in order to critique the article’s inclusion of the photo, constitutes fair use. Yet, this result superficially conflicts with an uncited ruling we blogged in December, Hirsch v. Complex Media–also from SDNY. That case also involved a vlogger’s republication of a screenshot of a NY Post headline and photo, in a video story where the screenshot appeared for no more than 4 seconds. Yet, unlike the Clark ruling, the Hirsch court denied the defendant’s motion to dismiss.

While I like this result and didn’t like the Hirsch result, I wonder if my blog post conclusion to Hirsch remain true, despite the good ruling here:

this opinion suggests that any collateral copyrighted material in the screenshot–such as a photo the newspaper licensed from a third party–is liability bait, no matter how briefly it’s shown. Fortunately, there is an obvious but suboptimal solution. Video producers taking screenshots of third party newspapers need to blur EVERYTHING–ESPECIALLY PHOTOS–other than the minimum they need to establish their point.

All of this is silly. Screenshots are a helpful and integral part of the information ecosystem. I hope we get more screenshotting rulings on a motion to dismiss (+ fee shifts) so we can redirect our energies to more meritorious problems.

UPDATE: I got a pointer to the Internet Archive copy of the blog post. Here’s the screenshot: 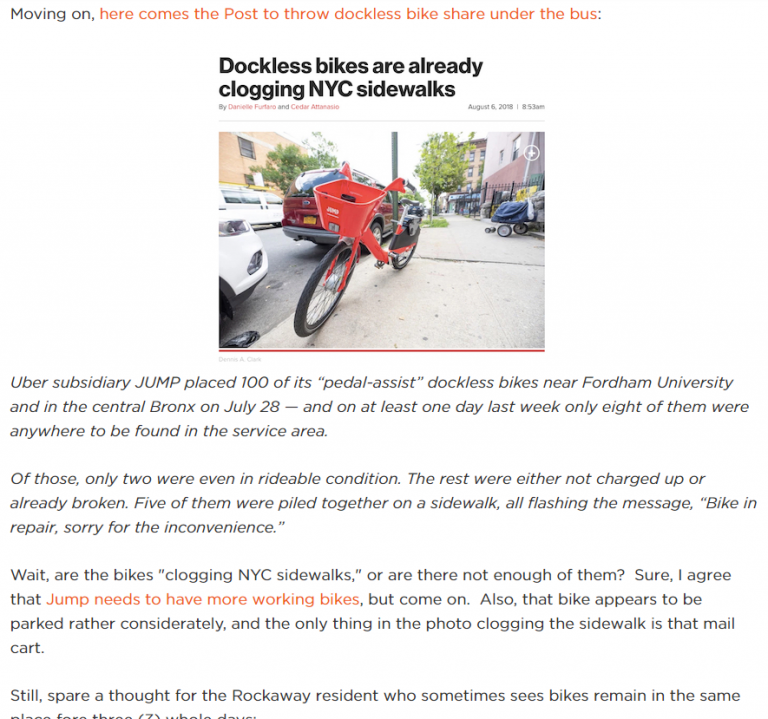