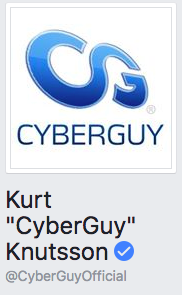 Knutsson was a technology reporter and creator of the “CyberGuy” persona. He worked for TV station KTLA between 1996 and 2011. In 2005, he entered into an agreement with KTLA to be paid an annual salary of $325,000 a year plus annual increases. [Note to self: try to find side gig as a tech television reporter.]

The agreement gave KTLA ownership over Knutsson’s work and gave KTLA the “unlimited right . . . to exploit the programs, recordings or any portions thereof” in any manner and by any method and in all media. The agreement broadly allowed KTLA to use CyberGuy’s content

in all forms of reproduction, transmission, exhibition, display, and presentation, including television, theaters, . . . libraries, devices marketed for the home . . . books, periodicals, wireless, internet uses and all other types of exploitation now existing or hereafter devised.

The agreement allowed KTLA to edit, rearrange, and otherwise modify the work. It also allowed KTLA to license CyberGuy material up- and down-stream to other stations owned by KTLA’s parent entities. A provision in the agreement said the content would be distributed under the “CyberGuy” brand. It allowed Knutsson to distribute the materials in two particular cities with the caveat that, if KTLA’s parent acquired a station in either city, the parent would have the exclusive right to air the material in the particular market.

The agreement contained two restrictions. First, it said that KTLA could not use Knutsson’s name and likeness as an endorsement. Second, it said that nothing in the agreement gave KTLA “ownership in the CyberGuy designation used by [Knutsson].”

KTLA severed its relationship several years into the last renewal and employed a new tech reporter. After the termination, the CyberGuy material continued to be published on the KTLA sites and sites for KTLA’s affiliated entities. Knutsson’s lawyer sent a cease and desist letter, and Tribune undertook steps to remove some (but not all) links to Knutsson’s content. Apparently, the links to content were removed from the main site but not from permalinks. Knutsson filed suit, alleging among other things, violation of his publicity rights. (He also asserted employment claims, but those were not a part of this appeal). The trial court denied defendants’ request to dismiss the publicity rights claims. On a request for a writ of mandate, the appeals court grants relief to the defendants and directs the trial court to dismiss the claims.

Common Law Misappropriation Claims: The court says that Knutsson’s common law misappropriation claims depend on whether he consented in his employment agreement to KTLA’s (and the other entity’s) use of his likeness. Knutsson argued that the use in question exceeded the permission granted because it resulted in endorsement of the websites in question. The advertising provision of the agreement said that:

[Knutsson’s] name, sobriquet (including ‘CyberGuy’), biography, picture, portrait, caricature, voice and likeness may be used in advertising and publicizing KTLA and the program and website material produced under this Agreement, but not as an endorsement or testimonial.

The court says this reflects common law rules, and advertising of a publication’s content–even if it contains Knutsson’s likeness–does not violate this provision unless there is an appearance of endorsement:

the use of Knutsson’s name and picture was not for ‘advertising and publicizing’ the stations of their content, any more than a traditional newspaper headline and photo of a columnist constitutes advertising or publicity for the newspaper.

In this vein, the court says use of his name and photo only occurred in the context of publication of the content and not for promotion of any other content. The use of the name and photo merely served to identify the material for readers. This was consistent with the provisions of the agreement saying that the content (assigned to the station) would be distributed under the brand in question.

Having said this, the court says it could see a scenario where use of the name and brand would promote the station by “attracting consumers to the sites through their web searches.” Even still, the court says that the “use of a neutral heading and Knutsson’s picture” are covered by this provision.

Endorsement Claims: As a part of his misappropriation claims, Knutsson tried to argue that the arrangement of the links on the KTLA (and affiliated entity) site(s) indicated endorsement. The court rejects this argument as well. First, Knutsson consented to presentation of the content he assigned along with any other content. This sufficiently amounted to consent, which vitiated a common law misappropriation claim. Second, the court says that display of numerous links to articles on the same page would not result in any consumer confusion about who wrote what article (i.e., no reasonable reader would assume endorsement by a particular writer of the station or another writer). The links in question all contain the names of the reporter, and upon clicking a link, any reader would readily be apprised of who authored what material.

The court does go on to say that the station would go outside of the consent if it used Knutsson’s person to endorse “other material”. For example, to the extent the station used his persona to advertise products, or the replacement columnist, this could amount to a violation of the common law right of publicity. But that’s not the case here.

The court also notes that the station did not exploit the content (or Knutsson’s byline) to the fullest extent possible, and this is a further data point in support of the station being within its rights under the agreement.

Statutory Claims: The statutory misappropriation claims rise and fall with the common law misappropriation claims. Further the statute requires two additional elements (knowing misuse and a direction connection between the use and a commercial purpose). As to the affiliated entity up the chain from KTLA, the court says the facts indicate a lack of knowledge and thus there can be no statutory violation.

This is an interesting twist on the myriad claims over ownership of employees’ social media accounts that we’ve anticipated but which have not come to pass (yet). (Phonedog v. Kravitz is one example of this type of a dispute.) For what it’s worth, Knutsson continues to own both the CyberGuy Facebook page and Twitter account and it did not appear that there was any dispute over these. I was curious to see what (if anything) the contract said about these accounts.

To the extent Knutsson granted a broad license to the content, it follows that he would have a tough time preventing use of his moniker along with the content. That’s sort of the function of a byline, and it’s surprising the court hewed to the contractual endorsement analysis rather than merely stating that the station had the right to label the content accurately. It seems like the court could have short circuited the claims by citing to Dastar and copyright preemption?

Ultimately, this looks like an attempt to use the license agreement (and a broad notion of misappropriation) to gain advantage in employment litigation, and the court sees it for what it is.

Finally, I wondered whether the TV entities had a possible anti-SLAPP argument.

Holy cow! $325k/year salary to be The Cyberguy? This dude was like the world’s most successful technology vlogger before YouTube was a thing.

The name “Cyberguy” is obviously a historical anachronism. Now, with all of the DC policy wonks angsting about “cyber-this” and “cyber-that,” a Cyberguy sounds like a date security Superman. “Look, up in the network! It’s a malware! It’s a virus! No, it’s CYBERGUY” to the rescue!

This case seemed like an odd combination of Dastar and Gilliam v. American Broadcasting, with a little bit of the right-to-be-forgotten thrown into the mix. Effectively, Cyberguy sought to suppress the publication and remixing of copyrighted works–works to which he had already transferred ownership–by controlling the attribution of those works. Fortunately for the defendants, the contract resolved the issues. Take note, content acquirers! A good content acquisition document includes very clear (and broad) rules about attribution both during and after the relationship.