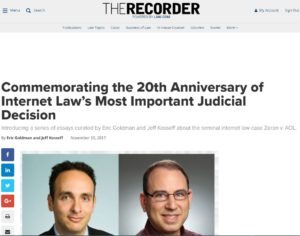 You’re probably already quite familiar with the Fourth Circuit’s 1997 in Zeran v. AOL. The case is one of the most cited Internet Law cases of all time, and it is a staple of Internet Law course syllabi around the country and the globe. To me, Section 230 and the Zeran ruling are equally essential; we don’t really get the full impact of Section 230’s immunity without Zeran’s broad statutory interpretation. For that reason, I (and others) attribute much of the Internet’s success to Zeran’s long shadow.

The ruling came out on November 12, 1997–20 years ago. To commemorate that anniversary, I worked with Prof. Jeff Kosseff (US Naval Academy) to assemble a package of essays examining the case from multiple angles. We gathered 23 essays from some of the biggest names in Internet Law, and Law.com published them. The essays roughly fit into four loose categories:

2) Section 230 fans, including Cohn/Williams, Gellis, Heymann, Jain, and Zittrain (he might be classified as a not-fan, depending on your perspective).

3) Section 230 not-fans, including Bartow, Franks, Schwabach, and Sylvain. Note: while I don’t agree with these essays, we didn’t impose an ideological standard for inclusion into the package. We can’t fully understand the Zeran case without examining it from all angles.

4) Doctrinal implications of the case, including Ballon, Ford, Frye, Grimmelmann, Penney, and Speth.

My apologies if this sounds self-serving, but I think all of the essays are terrific. As Prof. Hurwitz tweeted, “Not a dud in the bunch!,” an assessment I agree with 100%. So I encourage you to read all of them. (Eventually I plan to make that easier by compiling them into an ebook). While all of the essays are worth your time, as an uber-geek of Section 230, I have an especially soft spot for the historical takes, including:

* Jerry Berman shines a spotlight on how the long-forgotten “Interactive Working Group” helped shape Section 230 during Congress’ chaos in 1995.

* Hillary Brill talks about her firsthand experience as eBay in-house counsel trying to defend an eBay executive from a prosecution in India, where Section 230 wasn’t applicable.

* Pat Carome represented AOL in the litigation. His essay with Cary Glynn (who did some great guest-blogging here on SESTA) talks about the fortuitous set of circumstances that contributed both to the favorable ruling and to its speed. This is by far the longest essay in the package, but if you read only one essay, this is it.

* My essay addresses “one of the greatest unsolved mysteries in internet law”–who attacked Ken Zeran? Spoiler alert: “after more than 20 years, it seems unlikely this cold case will ever be solved.”

* Jeff Kosseff analyzes the background of Judge Wilkinson, the opinion’s author, to consider what prompted him to write such a broad and defense-favorable opinion

* Gavin Sutter compared/contrasted the divergent development of US and UK law.

As the maxim goes, read the whole thing. I hope you enjoy reading the essays as much as I did.

Here is a complete rundown of the 24 essays (the 24th being my overview essay with Jeff):

Robert J. Butler, “How the Scam Artists at Stratton Oakmont Made ‘Zeran’ Possible and Unwittingly Saved the Internet”

Roger Allan Ford, “How the Supreme Court Ignored the Lesson of ‘Zeran’ and Screwed Up Copyright Law on the Internet”

Cathy Gellis, “The First Hard Case: ‘Zeran v. AOL’ and What It Can Teach Us About Today’s Hard Cases”

Laura A. Heymann, “The Satellite Has No Conscience: §230 in a World of ‘Alternative Facts’”

Samir C. Jain, “The Non-Inevitable Breadth of the ‘Zeran’ Decision”

Jeff Kosseff, “The Judge Who Shaped the Internet”

Gavin Sutter, “The UK’s Broad Rejection of the §230 Model”

Olivier Sylvain, “AOL v. Zeran’: The Cyberlibertarian Hack of §230 Has Run Its Course”

Jonathan Zittrain, “CDA 230 Then and Now: Does Intermediary Immunity Keep the Rest of Us Healthy?”