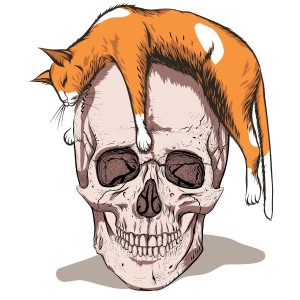 Harrell v. State (Georgia): Harrell was charged and convicted of attempting to intimidating a court officer and animal cruelty. Apparently, he was charged with some violations as a landlord and did not appear, and a warrant was issued for his arrest. He reached out to two superior court clerks and tried to “persuade” them to withdraw the warrant for his failure to appear. The entire factual recitation of what Harrell was alleged to have done is worth quoting in full:

[T]he evidence showed that . . . [o]n April 29, 2013, Harrell placed messages on the internet site Facebook that referred to Dodge County Superior Court Clerk Rhett Walker and Deputy Chief Clerk Tammy Graham. One post threatened that if the bench warrant was not lifted, Harrell would post an internet link to a video which he claimed showed Graham engaging in sexual activity with Harrell and two other men; no such video existed. Harrell also posted a claim that Graham had lied to the court regarding whether Harrell had been served with notice of a hearing regarding the accusation that he violated the duties of a landlord . . . . In another post, Harrell listed Walker’s personal cell phone number and urged readers to call Walker to tell him to leave Harrell alone while he was “on the run,” and thus not ruin Harrell’s “chicken foot eating victory.” Harrell also initiated telephone communication with Walker in an attempt to persuade him to lift the bench warrant, saying that if he did not do so by a certain date, Harrell would “turn [Walker’s] world upside down,” and that “you know what will happen on Facebook.”

At trial, evidence was also presented that on April 15, 2013, Harrell left two voice mail messages intended for Shirley Webb, Harrell’s former girlfriend and the mother of two of Harrell’s children. In one message, Harrell stated that he was Sid Carter, Webb’s current boyfriend, was placing the call from the cell phone of Harrell’s son, and referred to a “dead pussy” in Webb’s mailbox. In the other message, Harrell implied that he intended to upload pornographic videos of Webb to an internet site. That same day, Carter, who lived with Webb, found a dead cat in their mailbox when he checked the mail. As Carter called 911 from his cell phone to report the dead cat, Harrell drove by the house, slowed down considerably, rolled down a window, and pointed at the mailbox containing the dead cat before driving away. Carter and Webb later found an animal trap on a portion of Harrell’s property which adjoined Webb’s.

Harrell was charged under a statute that prohibited anyone from:

The court says that under Virginia v. Black, states may criminalize true threats, which it says are defined as statements where the speaker intends to create a fear of bodily harm. Under this standard, none of Harrell’s statements qualified. His posts to the Facebook group “DixieMafia,” while embarrassing and even caustic, did not intend to place anyone in fear of harm. Nor did the putative victims testify that they were placed in any fear of harm as a result of his statements. While the statute also prohibits someone from “impeding” a court officer, Harrell was not charged with this. And the court intimates that given his speech was not unprotected, nor could he have been.

As to the animal cruelty charge, the court says it was improperly joined with the intimidation charge. This court reverses, but notes that he can be retried for it.

People v. Murillo (California): Murillo was an aspiring rap star apparently. He was friends with Villalpando, who was convicted of several counts of unlawful sex with a minor (from his conduct with two different minors). Murillo posted messages to his Facebook account about a song he wrote and performed (titled “Moment for Life Remix”).

The song stated that he missed Villalpando. It also referenced the two victims by first name and described the girls as “hoes”. He went on to say:

[T]hese b#$* caught him [Villalpando] slipping
Then they fucking snitching
I’m f*$& all these b*#$
Hunting down all these snitches
Shit you know we have no fear
I’ll have your head just like a dear
It will be hanging on my wall . . .
You’re going to be laying on that bed
Cuz im coming for your head b(*#$

Murillo’s high school dean apparently put pressure on Murillo to remove the song. In response, Murillo said the dean was a “dumb ass” and . . . “805 hoes on blast lol”.

One of the victims saw the link, listened to the song, was frightened, and complained to her mom and ultimately to law enforcement. [The song was downloaded 1,089 times and played 23,468 times.]

The magistrate preliminarily reviewed the charges and found that there was no “willful threat to use force” against either of the victims. The California Court of Appeals disagrees. The court notes that the underlying threat statute has been construed to cover threatening statements “that a reasonable listener would understand” as a threat. In the circumstances, the court says that a reasonable listener could have understood “Moment of Life Remix” to embody threats to the two victims. The court noted that it requested briefing in light of the Supreme Court’s ruling in Elonis but both parties agreed that since Elonis ultimately relied on statutory interpretation to determine the minimum mens rea required under the federal threat statute, it was not relevant.

Harrell cited Virginia v. Black for the proposition that true threat requires subjective intent to make a threat. It does not mention Elonis. (Some state courts hew to the view that Black requires intent but numerous others do not.) Murillo does not mention Virginia v. Black and says that Elonis is not relevant to the question of whether the subjective or the objective test applies. The different legal standards cause sharply different results.

There’s an argument to be made that while Elonis did not rule that negligent is insufficient as a matter of First Amendment law, it still relied on general principles of criminal culpability, and those would be relevant in determining the mens rea required under a state statute. The EFF and ACLU of Southern California make this and other arguments in an amicus letter. (See “EFF Urges California Supreme Court to Hear a Bad Rap Lyrics Case“.)

Regardless of the outcome, these cases show the minimal direct effect of Elonis on state law prosecutions for threatening speech. It fizzled as a First Amendment case in this regard.

When Can Defendants Defeat A Criminal Threat Prosecution By Claiming They Were Joking? Not Often

Court Says Uber and Lyft Drivers May be Employees