Recently, millions of LinkedIn users received an email titled “LEGAL NOTICE OF SETTLEMENT OF CLASS ACTION.” The email told recipients about a proposed class action settlement in Perkins v. LinkedIn, involving “LinkedIn’s alleged improper use of a service called ‘Add Connections’ to grow its member base.”

This email attempted to inform the purported victims of their settlement options. Class members can ask for cash from a settlement fund, opt-out of the settlement and pursue an individual lawsuit, communicate their objections to the settlement and hope the judge reforms its terms or scuttles it entirely, or do nothing. The email also links to a class action settlement-specific website that provides more details.

Communicating with a large class of millions of victims is never easy, but this particular notification was handled particularly poorly. Let me highlight six problems with the notification:

However, delivering an email on late Friday afternoon almost certainty reduces email readership. Late Friday afternoon is a time when many people have schedule conflicts, such as traveling, family and social gatherings, and observing Shabbat. The emails aren’t likely to be opened immediately, so they will get buried under new emails accruing over the weekend. If the sender’s goal is to reduce the number of people who open the email, late Friday afternoon is a fine choice. (As this article explains, “Weekends tend to have low open rates, so most marketers avoid them like the plague”). Thus, the timing of the Perkins v. LinkedIn settlement notice probably didn’t maximize class members’ awareness of their legal rights.

2) Terrible subject line. Email subject lines create the email’s first impression to recipients, so they require special finesse. This particular subject line wasn’t handled skillfully. The subject line was written in ALL CAPS (a usability no-no), starts with the scary words “legal notice,” and opaquely indicates a “settlement of class action.” Based solely on the subject line, this email looks like a possible phishing attack similar to a Nigerian 419 email scam; or it looks like part of a trolling campaign where plaintiffs (like copyright owners) threaten Internet users with litigation that can be settled for a low amount. We’ve taught email users to delete phishing attempts without opening the email, and other recipients might ignore the email hoping any trolling demand just goes away. As a result, the subject line discouraged email opening.

The email’s real message is that recipients might be entitled to free money. Communicating that message in the subject line would certainly improve email open rates if it could be done without looking like a phishing attack.

3) No notice within LinkedIn. Sending official legal notices via email will always have challenges about subject lines, delivery times, spam filters, etc. As a result, it’s advisable to use additional media to reach class members. Here, it would make sense to notify LinkedIn members about a LinkedIn matter ON LINKEDIN. After all, being a LinkedIn member is the one thing every class member has in common with each other, and a message on LinkedIn would avoid some of the standard email problems. If there was any notification on LinkedIn about the class settlement, I didn’t get it, nor could I find any announcement about the settlement in my LinkedIn newsfeed or an ad widget. I understand why LinkedIn wouldn’t want to communicate with its members about this potentially embarrassing and brand-damaging settlement on its own site, but not using the most logical way to reach class members is baffling.

4) Unclear how to claim the cash. Because most people want the cash, the instructions on how to get it are especially important. Here’s what the email notice said about how to get the cash: 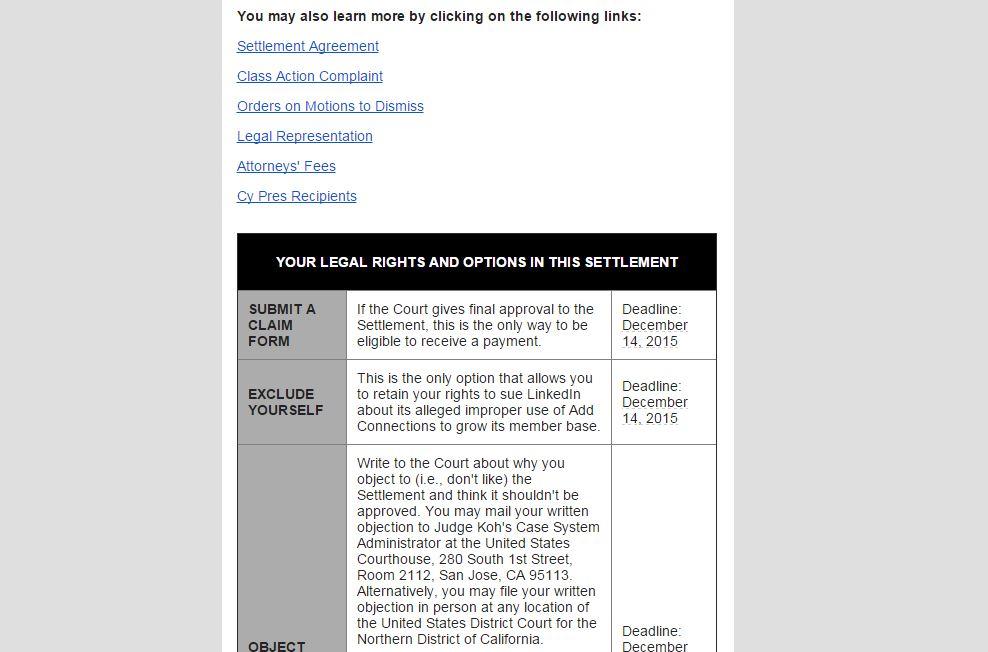 If you can’t see the image, here’s the key language:

SUBMIT A CLAIM FORM / If the Court gives final approval to the Settlement, this is the only way to be eligible to receive a payment. / Deadline: December 14, 2015

OK, sounds good, I’d like to do this, and I’m worried about the scary deadline. Now what? The email itself provides no further instructions on how to “submit a claim form,” nor does the email provide a direct link to the claim form even though that would be easy to do (plus the email confusingly provides a series of unrelated links immediately above this language). Eventually, anyone determined enough to get the cash will visit the class action settlement website and navigate around to find the link to the claim form. But given most recipients want to know how to get the cash, why did the senders make it so hard to figure that out? And how many people gave up because even this small hurdle was more than they were willing to overcome?

5) Overloaded website. Even if you try to bury the news on late Friday afternoon, if you notify millions of people that they may be entitled to cash, you can reliably predict that the website will get A LOT of traffic. It makes sense to work with a content delivery network and an industrial grade server farm to ensure adequate excess capacity during the initial crush. Instead, this settlement website was not up to the task. Throughout Friday afternoon, it was so overloaded that I couldn’t access the website at all in either Chrome or Firefox. The traffic crush has apparently died down, so the website works fine now. But how many class members, unable to access the website when they first opened the email, simply gave up and decided it wasn’t worth the effort?

6) Increased security risks by submitting a claim. The claim form gives two options of how to get paid. The first option visually dominates the form and asks for bank account information so that the cash may be sent electronically. Below that is a second, less visible option to get a check. Moving money electronically will be cheaper and faster for the settlement administrators, so it’s not surprising that this option got prominent billing.

However, all of the personal information gathered from class action settlement claims creates a new security vulnerability; it’s a hacker honeypot. Putting bank account information into that database makes the target much, much juicier to the bad guys, which magnifies the security risk. Perhaps the settlement administrators have such industrial-grade security that it can fend off any attack from the bad guys, but given the avoidable server overload initially, I highly doubt it. Instead, the increased security risk creates an irony: the lawsuit was designed to remedy a purported privacy violation by LinkedIn, but the solution exposes the victims of that alleged privacy violation to additional security risk. I discuss this conundrum in more detail in my article, The Irony of Privacy Class Action Litigation.

I have no opinions about the substantive merits of this particular lawsuit, but I have a general skepticism about the merits of privacy-related class action lawsuits as a way of remedying the purported problems. In this case, I will be keenly watching the number of claims tendered by users, as well as the transaction costs incurred to get money into the alleged victims’ hands, to see if we can declare in the end that justice was served. (For an example of just how out-of-whack these numbers can be, see the Heartland Payment settlement involving 130M purported victims, a 0.00000846153846153846% notification response rate, and about $1k of transaction costs per individual claim tendered). Even if you end up getting a check (probably a few years from now) from LinkedIn to settle this case, ask yourself if you honestly believe that this process and that money was the best way to solve the purported problem.