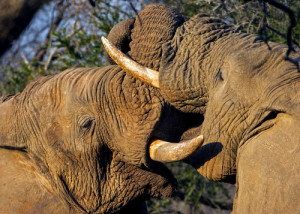 For outside observers, it’s always thrilling to see two elephants like the EC and Google go tusk-to-tusk in a high-stakes battle. Normally, the government holds the edge in such clashes; after all, their enforcement resources are functionally limitless. But Google’s power as an institution is verging on government-esque, and I bet more than a few EC insiders wish they had as much money as Google. I think this suggests we have two well-matched opponents, and all that money sloshing around should continue to benefit the army of consultants, lobbyists, PR folks and lawyers working on this case.

This case is still unresolved, after 5 years of “negotiations,” in part because the EC “market tested” the prior three settlement proposals. “Market testing,” a classic example of bureaucratic double-speak, means the EC asks a company’s rivals if they like a proposed antitrust settlement. Here’s a protip we knew even before Google’s critics shat on the first three settlement proposals: Google’s critics will *NEVER* be happy with any settlement proposal that Google would voluntarily accept. They will *ALWAYS* want more concessions (preferably infinite traffic to them at zero cost). Talk about letting the inmates run the asylum.

Even though Google’s critics have no incentive to be reasonable in the market testing phase, there’s a deeper structural problem that hinders resolution of this case. Exactly what would a “good” result from this enforcement action look like? The destruction of Google? Google competitors telling the government how Google’s search results pages should look? Massive fines? I’m having a hard time imagining how any of these outcomes will actually benefit consumers or even improve the market’s functioning. If there’s no win for society at the end of this spectacle, then what’s the point of the exercise?

My apologies that I can’t muster the enthusiasm to write more on this development. I got burned out on the search-engines-and-antitrust topic around 2010, after the academic literature had canvassed most of the key theoretical framework and the discourse got overtaken by paid advocates and pseudo-science. Fortunately, not everyone shares my malaise for reporting on the topic, so the least I can do is point you to some of the better contributions on the topic.

* The European Commission’s press release. Some allegations from its fact sheet on the shopping service issue (emphasis in original).

* Google Blog Post: Android has helped create more choice and innovation on mobile than ever before

* WSJ: Why Google’s Antitrust Problems Are Bigger in Europe. Citing Herbert Hovenkamp, the article explains the three main differences between the European and American treatments of Google:

– Google’s higher market share in Europe
– “European law is more protectionist and interventionist”
– The European legal standard is “abuse of a dominant position,” which can include more concerns than traditional US norms about antitrust

Personally, I’m not expecting the EU action today will ultimately bring any great benefit to shopping search. But I’ve been pessimistic about the space for years. Just use Amazon.

So what’s going to happen? Google now has ten weeks to respond to all these charges. I’d bet it will push back on everything. Then I’d expect we’re going to have round after round of negotiations, maybe an actual legal fight and in the end, the shopping space will have changed so much from where this all began that none of it will matter.

Over the last few decades, Europe’s regulators have challenged the practices of some of the titans of American technology, including Microsoft, Intel and now Google.

And despite years of legal wrangling and in some cases, multibillion-dollar fines, the companies have conducted their businesses virtually unchanged….

“The remedy issues are great challenges for antitrust,” said Harry First, a law professor at New York University who has written a book about Microsoft’s antitrust troubles. “These companies are big and smart and they know their businesses better than the regulators do.”

* James Grimmelmann, In Its Antitrust Debacle, Was Google’s Real Victim You?, Wired

it’s not clear that any shadiness on Google’s part translates into real consumer harm. Has Google hurt users? Maybe. Has the Commission demonstrated it? No.

They don’t say that users do end up with less relevant results, only that they might. That’s a slender reed for such a high-stakes case. Proving that Google hurt consumers and not just competitors will take more face cards than the Commission has laid down so far.

* Farhad Manjoo, Case Against Google May Be Undercut by Rapid Changes in Technology, New York Times:

With more than a decade of hindsight, the theories supporting the case against Microsoft have all but fallen apart, and the pursuit of the company that makes Windows may suggest a reason for skepticism about this fight against Google: The tech marketplace is fluid and unpredictable. The giants that look most unbeatable today could falter in ways that may once have seemed unthinkable — and without a lot of help from the government.

the EU’s formal charges come at a time that may in retrospect be seen as Google’s high point. It’s undisputed that the company is the globe’s dominant search engine. But just as Microsoft was being pursued by the US and EU as a PC/OS monopoly, the market was shifting and the company’s dominance was being eroded by technology and consumer behavior changes.

That is probably also happening to Google right now. The company faces challenges from mobile apps and from Facebook and others that have made it less dominant or central to the mobile internet. And although Google is in no danger of being marginalized in mobile (at this point) it is rapidly having to adapt to a new world where it less “necessary,” as well as to intensifying competition.

Microsoft has kept its coffers full for the fight, spending more on lobbying here than any European company. And Microsoft has founded or funded a cottage industry of splinter groups. The most prominent, the Initiative for a Competitive Online Marketplace, or Icomp, has waged a relentless public relations campaign promoting grievances against Google….

Microsoft has links, to varying degrees, with the three initial complainants that sparked the antitrust investigation into Google. And Microsoft’s activity gained momentum as a new European government re-energized the investigation. Last month, Microsoft played an important role in a delegation of American companies that met with the United States ambassador here, essentially asking him to let Google fend for itself against European regulators.

The fact that she had the mettle to take on Google comes as no surprise to her political colleagues and rivals back home. In certain circles, she is known as the “Iron Lady of Denmark.”

As minister of the economy, for instance, she pushed for changes to Denmark’s generous social welfare benefits, including substantially curtailing unemployment benefits. Subsequently, a group of jobless builders presented her with a gift: a life-size sculpture of a hand with a raised middle digit. She keeps the artifact prominently displayed on a coffee table at her office in the European Commission.

Also from the New York Times: The Danish Politician Who Accused Google of Antitrust Violations

In a draft of the Commission’s strategy for creating a digital single market, seen by Reuters, it says it will “carry out a comprehensive investigation and consultation on the role of platforms, including the growth of the sharing economy.”

The investigation, expected to be carried out next year, will look into the transparency of search results – involving paid for links and advertisements – and how platforms use the information they acquire.

* AdWeek, Here’s How Europe Is Stifling the Ad Business for Google, Facebook and Others

it now takes people on average about eight or nine seconds to find the result they want, down from 14 to 15 seconds in the previous study. “We’re scanning more real estate but finding what we want almost twice as quickly,” Hotchkiss said. That’s testament to Google’s improving ability to divine what we want, he added.

More comments from me

My law review articles on the topic:

* Linkwrap of Google’s Antitrust Deal With the FTC

* Assessing Winners and Losers in Google’s Worldwide Antitrust Battles (sadly, way more optimistic than I had a right to be!)

* Texas AG Investigating Google Search, and I Have Questions. The Biggest: Are You Kidding Me???

* Of Course The First Amendment Protects Baidu’s Search Engine, Even When It Censors Pro-Democracy Results

* What Would a Government-Operated Search Engine Look Like in the US?