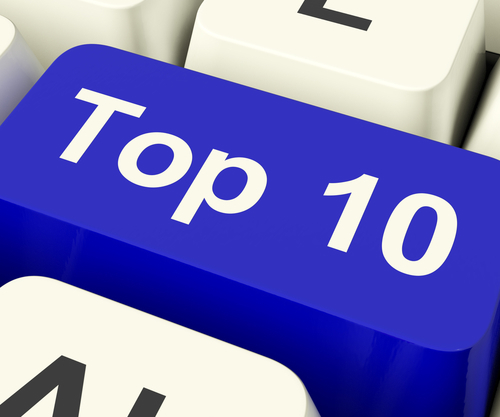 #10: The Push Towards Anti-Class Action Arbitration Clauses.  In 2011, the U.S. Supreme Court ruled in AT&T Mobility v. Concepcion that businesses may be able to adopt mandatory arbitration clauses that ban customer class-action lawsuits.  The ruling was hardly crystal-clear, but in its wake, many websites adopted such clauses.  Nevertheless, as the Zappos decision points out, these clauses must be adopted according to the laws governing contract formation and amendment, or they will fail in court.

#9: General Patraeus/Paula Broadwell Imbroglio.  On the surface, it’s just your typical Washington DC sex scandal.  However, it had several interesting cyberlaw angles, including the attempts to hide digital conversations and Ms. Broadwell’s alleged cyberharassment of Jill Kelley.  My biggest takeaway: If the CIA Director can’t keep the FBI from reading his email, what chance do you or I have?

#8: Do-Not-Track Meltdown.  Everyone hoped that industry would come up with a do-not-track (DNT) standard rather than kicking the issue to Congress or the FTC.  Then, it all went to heck.  Microsoft announced it would turn on DNT by default in its browser, which prompted Internet publishers to threaten to ignore Microsoft’s DNT signal.  Meanwhile, Internet publishers and others adopted a narrow definition of “do-not-track,” arguing it meant no-tracking for advertising purposes, but tracking for other purposes was still OK.  The effort then devolved into acrimonious recriminations and left open the possibility that government regulators will fill the gap–to everyone’s detriment.  (For what it’s worth, I take a very dim view of technological do-not-track efforts for reasons I explain here).

#7: Social Media Exceptionalism.  In 2012, regulators eagerly sought to “fix” social media through regulation, but their efforts will fail because no one can precisely define social media as a subset of Internet activity.  For example, California’s recent attempt to curb employers’ attempts to obtain employees’ social media passwords led to the astounding definition that “social media” means all digital data, whether online or off.

#5: Software Patents/Smartphone Wars.  The smartphone industry has ushered in a glorious era of innovation, but it’s also highlighted how patents can hinder, not spur, innovation.  Smartphone players have spent (wasted?) billions of dollars on patents with the hope that they can operate without restriction from other players’ patents, and many tens of millions of dollars have been spent (wasted?) on legal fees as the players sue each other for patent infringement and defend against interlopers with weak/bogus patents hoping for a little taste of the action.  See my essay on software patents:

#3: Google and Antitrust.  The FTC largely dropped its antitrust investigation against Google, and dropped it completely with respect to Google’s search engine practices.  (Technically the denouement rolled out on January 3, 2013, but I’m still counting it as a 2012 development).  This is an important development for several reasons.  First, the FTC–which makes its living by bringing enforcement actions–admitted it had no reason to complain about Google’s search engine practices.  Second, the scuttlebutt all throughout the investigated suggested that the FTC was committed to busting Google, and Google turned that situation around 180 degrees.  Third, not intervening into the operation of Google’s search algorithm is a logical decision, but one still worth celebrating.  This was a great resolution for Google, a complete rejection of the concerns raised by Microsoft and other Google-haters, and due to the FTC’s non-involvement, ultimately a big win for Google’s users.

#2: ITU/WCIT’s Attempted Internet Takeover.  I really didn’t understand what happened in Dubai at the ITU/WCIT meeting.  All I know is that nothing good could have happened there, so preserving the status quo is a win, as ironic as that sounds.

However, there has been some teeth-gnashing that the meeting exposed looming fault lines between pro-censorship and anti-censorship governments.  I don’t understand that angst for at least two reasons.  First, all governments are pro-censorship, and that certainly includes the United States.  Indeed, the US has exhibited some awkward duality as it rails against foreign attempts to censor the Internet even as both Congress and the Obama Administration exhibit a never-ending pursuit of controlling the Internet themselves.

Second, the Internet has already fractured into multiple “Internets.”  The Internet in the United States increasingly bears little resemblance to the Internet in foreign countries, both because local regulators simply block certain websites and because websites localize their services to accommodate local regulation.  Plus, it’s been proven that countries can simply “unplug” from the Internet.  Thus, we don’t have a single unified Internet; we have many partially-overlapping Internets.  I will say more about this in a future post.

#1: SOPA’s Failure.  The failure of SOPA/PIPA is not the watershed event for our republican democracy that we wished it would be.  Citizen-driven rejection of special-interest Internet legislation will not happen very often.  But as a David-and-Goliath story–the uncoordinated and oft-ignored Internet user community rising up against a well-oiled and undefeated copyright lobby–it doesn’t get any bigger than SOPA.  Also, we learned something really important: American voters will acquiesce to a lot of bad and self-interested decisions by their elected officials, but voters will grab the torches and pitchforks if they think the Internet is threatened.

Some other developments of note:

* despite the Fourth Circuit’s rekindling of the Rosetta Stone case before it settled, the decade-long keyword advertising litigation battles against Google are basically over with a big win for Google and other keyword advertising vendors.  I also think we’ll see trademark owner-vs-advertiser lawsuits tapering off too.

* app cloning is a big business, and we’re seeing increasing lawsuits in the area, including the EA v. Zynga and TripleTown cases.

* the application of the Computer Fraud & Abuse Act is being dialed back in the employment context (see the Nosal and WEC cases).

* Oracle v. Google gave us one of the cleanest rulings to date that software APIs are not copyrightable.  The case was also interesting for the judge’s investigation into the paid advocacy efforts of both Oracle and Google.

* the images of Marilyn Monroe and Albert Einstein are moving closer to the public domain.

* the IB v. Facebook ruling could be a watershed decision in spurring class action lawyers to make a buck in the name of “protecting the kids” in court.

* Web publishers can improve their defamation defenses by hyperlinking to original sources.

I read a lot of cases in 2012, and some of the most interesting cases I saw this year:

* Erickson v. Blake.  Music composers can create copyrightable compositions by equating the digits of the number “pi” (?) to musical notes, but they can’t stop others from creating their own musical compositions based on pi’s digits.

* Bland v. Roberts.  Two government employees “liked” their boss’ opponent in an upcoming election; after the boss won reelection, the employees allegedly got fired for their divided loyalties.  The court (mistakenly, in my opinion) said that “liking” an item on Facebook isn’t constitutionally protected speech.

* Scott v. WorldStarHipHop.  A classmate posted a video of Scott fighting with an ex-girlfriend.  Scott obtained the copyright to the video from his classmate and, as the new copyright owner, sent copyright takedown notices in an effort to scrub the video from the Internet.  This copyright acquisition scheme basically converts copyright law into a “right to forget.”  In 2013, expect to see even more plaintiffs acquire copyright ownership as a way to suppress/control unflattering content about them.

* In re Heartland Payment Systems.  This is a settlement of a data security breach class action lawsuit with 130M class members.  The parties spent $1.5M to encourage class members to tender damage claims and another $270k to process the tendered claims.  A total of 290 claims were tendered, of which 11 were valid, with a maximum payout per valid claim of $175.  So the parties incurred $1.75M in transaction costs to award about $2k in damages.  Interesting.

* Augstein v. Leslie.  If you post a YouTube video promising $1M for the return of your laptop, you could actually owe $1M if someone returns your laptop.

* Olson v. LaBrie.  Facebook should bring families closer together, but in one family, photo tagging plus a snarky comment prompted a lawsuit for a restraining order.

← Q4 2012 Quick Links, Part 3 (47 USC 230 and more)
Virginia Supreme Court: Litigant Who “Cleans up” His Facebook Page May Be Sanctioned →
Subscribe to Blog via Email
Categories