Court Says “You May NOT Amend Your TOS by Posting New Terms to Your Site”–International Markets v. Thayer

Most online terms-of-use agreements claim to give their drafters broad discretion to modify the terms at the host’s discretion. Some terms-of-use agreements purport to allow host websites to modify the terms by sending an email (inevitably, to your spam folder) to notify you of the changes. Others require users to constantly refresh their browsers to know when updates occur.

Before 2022, courts usually enforced the former strategy while requiring some evidence of actual or constructive notice to enforce the latter. It was always a little dicey trying to figure out when courts would enforce these updates. However, usually, if plaintiffs could provide some evidence of notice that was consistent with how the original contract said it would update the terms, courts would give them the benefit of the doubt, at least at the early stages of litigation.

But this year, courts have begun to require more rigorous evidence of notice and assent to enforce modifications to online agreements. This was the key takeaway in Sifuentes v. Dropbox, Inc., 2022 WL 2673080 (N.D. Cal. June 29, 2022), which held that email notification of an update to a terms of use agreement could not bind the plaintiff to arbitration if the defendant could not prove that the plaintiff had read the email notification. And this was also implicit in Alkutkar v. Bumble, Inc., 2022 WL 4112360 (N.D. Cal. Sept. 8, 2022), which was able to enforce its arbitration clause only because it was able to sell the court that it had effectively implemented a mandatory click-through process to notify users of its amendment.

The most recent court to scowl in the direction of a company that purported to unilaterally update its terms-of-use agreement with little or no notice to users was Int’l Markets Live, Inc. v. Thayer, 2022 WL 4290310 (D. Nev. Sept. 16), a case out of the District Court of Nevada.

The facts of the case are as follows:

Plaintiff International Markets Live is a company that educates customers about how to flush money down the toilet to trade foreign and crypto currencies. “Its customers use their subscriptions to Plaintiff’s services to access this educational and research content. IML contracts with Independent Business Owners (IBOs) to ‘effectuate the direct sales model of its products and services.’” Id. at 2.

The plaintiff and the defendant first entered into a contractual agreement in 2018. Everyone agrees that this was a “clickwrap” agreement.  [Eric’s note: I would never use this term without mocking it.] This clickwrap agreement gave the plaintiff broad discretion to update the terms by posting the updates to the site.

The plaintiff then updated its terms three times over the next three years. In a couple of instances, the updates seemed targeted at the defendants’ alleged conduct—namely, using plaintiff’s educational content to compete against it. These updates were posted to the website.

In 2022, plaintiff sued defendant for breach of contract, among other things. In August 2022, the plaintiff filed for a temporary restraining order to get an injunction to stop defendant from competing against it.

The District Court of Nevada denied the TRO on the basis that it did not have jurisdiction over the matter. The only basis for its jurisdiction was the updated version of the terms of use, of which plaintiffs could not prove that defendants had seen or consented.

The Ninth Circuit requires notice to the nondrafting party for any unilateral amendments to online contracts (presumably by the drafting party). See Douglas v. U.S. Dist. Ct. for Cent. Dist. of California, 495 F.3d 1062, 1065 (9th Cir. 2007) (per curiam). Here, the facts parallel those in Stover. 978 F.3d at 10861. The contract was a hybrid: Plaintiff alleges in its Complaint that IBOs “click boxes” certifying that they agree to comply with all listed terms in the original agreements they enter into with Plaintiff, and that Defendant did so here. Subsequent amended contracts appear “uploaded to the website,” like browsewrap agreements. See Stover, 978 F.3d at 1086. The Ninth Circuit found that the unilaterally changed terms on a credit reporting agency’s website were “unenforceable due to a lack of notice: even if the [nondrafting party] visited the website where the new contract was posted.” Id. Plaintiff argues IBOs’ use of Plaintiff’s website required frequent visits to the pages where the amended terms could be viewed, and that as an IBO, Defendant further agreed to stay up to date with the terms and conditions. Under the Stover analysis, however, the inquiry is not how often the nondrafting party would log on to a company’s webpage, but rather whether the drafting party properly notified the plaintiff of any revisions to its contract terms. Id.

Stover contemplates Plaintiff’s argument here, that a different rule should apply to online businesses; instead, it cautions that an “absence of limits on the frequency or substance of changes in terms subverts the basic rule of contract law that ‘[a] contract exists where the parties assent to the same thing in the same sense, so that their minds meet.’” Id. (internal citations omitted). In its pleadings and briefings before the Court, Plaintiff cannot show either that Defendant expressly consented to a change of forum and choice of laws clause in June 2021, or that he was on sufficient notice of the unilateral amendment posted to Plaintiff’s website. Douglas, 495 F.3d at 1066 (“[p]arties to a contract have no obligation to check the terms on a periodic basis to learn whether they have been changed by the other side.”)

On the surface, this seems like standard 9th-Circuit logic on the enforceability of online contracts. If you want to enforce a browsewrap agreement, you must provide evidence of actual or constructive notice and assent. That’s the boilerplate language from Nguyen v. Barnes & Noble Inc. that we see in every browsewrap case. 763 F.3d 1171, 1175-76 (9th Cir. 2014). [Eric’s note: “browsewrap” is also verboten.]

But dig a little deeper and we see some interesting developments here. First, this is a sophisticated company vs. sophisticated business-person case. We’re not talking about a 12-year-old looking to avoid the enforceability of the online terms of their video game company. Here, we have a user of a service that openly becomes a competitor of the service using the materials the defendant received as a part of its online agreements to allegedly compete against the plaintiff. Courts historically have been eager to impute actual or constructive notice to sophisticated parties in online contract cases like this. See, e.g., CouponCabin LLC v. Savings.com, Inc. 2:14-CV-39-TLS (N.D. Ind. Jan. 10, 2017). That didn’t happen here.

Second, counsel for plaintiffs signed a declaration that defendants were presented with a pop-up notifying them of the changes. The procedural posture of this case was that it was a TRO, not a motion-to-dismiss, but I was surprised that the attorney’s declaration seemed to carry no weight whatsoever. It’s noteworthy when an attorney puts his law license on the line to testify to a fact in court, and then the court ignores that fact. Historically, in the early stages of litigation, any evidence of notice would be sufficient to carry the plaintiff’s evidentiary burden. But this court needed more.

Based on the facts of this case, I think we can say with greater confidence than ever that the unilateral right to amend an online agreement by posting the changes to your site is a delusional form of wishful thinking that should fool no plaintiff’s lawyer. 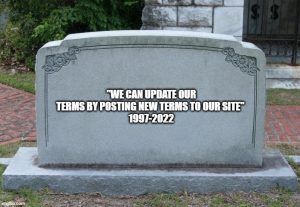 RIP, “The Company may update these terms of use at any time by posting updates to this site.” Born, circa 1997. Always sick and infirm. Officially declared dead, 2022.

What’s more, the burden on websites to provide technical evidence of notice is perhaps greater than we might previously have expected. Mere assertions and declarations might not get the job done anymore. It was always a good idea for IT departments to track with cookies or logs whenever a user assents to an online agreement. But now it’s looking like a “need to have” instead of just a “good to have.”

Extrapolating from this case, my big question going forward is whether updated clickwrap agreements that require assent, but do not provide clear notice of the material changes in the terms, are enforceable. Reading the language of Int’l Markets and Dropbox, I think the answer should be no, but I haven’t seen a court say as much.

Either way, this line of cases could be a boon for class-action lawyers looking to avoid arbitration. Find a plaintiff that clicked “I agree” to the 1997 version of the terms and see if you can sue on the basis that subsequent iterations of the terms are unenforceable for want to notice. Based on the logic of Int’l Markets, it just might work.