All of Trump’s Social Media Lawsuits Now Have Been Transferred to the Defendants’ Home Courts–Trump v. Facebook 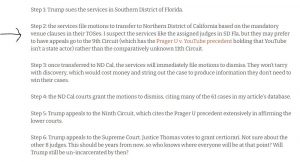 In July, Trump sued Twitter, YouTube, and Facebook for terminating his accounts in three separate doomed-to-fail lawsuits. The lawsuits were filed in Trump’s home court of Southern District of Florida. The three defendants all filed motions to transfer the cases to the their home court in Northern District of California. As I predicted when the cases were first filed (see graphic on the right), the judges have now granted all three motions. The Twitter and YouTube cases transferred last month. The court has now also granted Facebook’s transfer request.

As with the Twitter and YouTube transfer decisions, the opinion rejects a series of brain-meltingly bad arguments from Trump that most lawyers would be too embarrassed to make publicly. For example, the judge says one argument isn’t “either logically sound or legally meritorious.” (In fact, that’s an evergreen description of most of Trump’s legal advocacy). Some other lowlights:

Trump Doesn’t Get VIP Legal Treatment as a Former President.

Plaintiffs fail to substantiate these claims with any case law, statute, or regulation prohibiting the President of the United States and/or federal governmental entities from executing agreements that contain forum-selection clauses. Plaintiffs further fail to cite to any case law, statute, or regulation that nullifies a forum-selection clause in an agreement between a private corporation and a private individual, once that private individual becomes a federal governmental official. Therefore, Plaintiffs have failed to establish that Mr. Trump’s former status as President of the United States on January 6, 2021 precludes Facebook from enforcing its forum-selection clause against him.

Plaintiffs repeatedly and unequivocally characterize the nature of their FDUTPA claims as arising out of Facebook’s various policies and standards, all of which the forum-selection clause expressly covers….Plaintiffs’ claims “do not have to be about breach of the parties’ agreement; [Plaintiffs’] claims merely have to ‘relate’ to the Terms.”  Accordingly, it is clear that Facebook’s forum-selection clause falls within the scope of not only Plaintiffs’ federal causes of action, but also Plaintiffs’ claims under FDUTPA

Public Interest Doesn’t Require the Case Be Heard in Florida

In response to Trump’s feeble attempts to keep his cases in his home court, courts be like: