President Trump Loves Section 230 for Himself, Just Not for Anyone Else (Guest Blog Post)

[Eric’s introduction: this is the second of a two-part series from Jess Miers, a 3L at SCU and my RA, providing historical context on Trump’s anti-social media statements, including the anti-Section 230 Executive Order from last month. See the first part.]

Trump depends heavily on Twitter, and Twitter depends heavily on Section 230. Yet, Trump routinely and ironically disparages Section 230 on his Twitter account (as seen here, here, and, bizarrely, as 230 doesn’t apply to copyright claims, here).When Twitter finally used fact-checks on Donald Trump, Trump threatened to “revoke” Section 230 and close down social media for good. Trump’s tantrum led to a (mostly performative) Executive Order seeking to undermine Section 230. It feels like Trump hasn’t thought through how social media services would kick him and his loyalists off their services if Section 230 didn’t protect them.

It won’t surprise most readers, but Trump’s criticisms of Section 230 are also hypocritical because Trump has relied on the statute in his personal affairs. I’ve found three cases in which defendant Donald J. Trump or his campaign company, “Donald J. Trump For President, Inc.,” have invoked Section 230 to escape legal liability as the publisher of third-party content. Unsurprisingly, his lawyers’ arguments conflict with his recent anti-230 rhetoric and the executive order. So, despite his tough criticisms of Section 230, he still relies upon the law when it benefits him.

This case involves former “The Apprentice” contestant, Summer Zervos. In October 2016, Zervos participated in a televised news conference, exposing Trump’s unwanted, sexual advances towards her while she was a contestant on his show. As usual, Trump retaliated.

Following the conference, Trump issued a statement on his campaign website denying Zervos’ allegations, calling her a liar and suggesting nefarious political and financial motivations. Zervos’ cousin, John Barry, published a similar statement to the campaign website. Trump retweeted an account that shared the Barry statement, adding his own comment: “The truth is a beautiful weapon.” 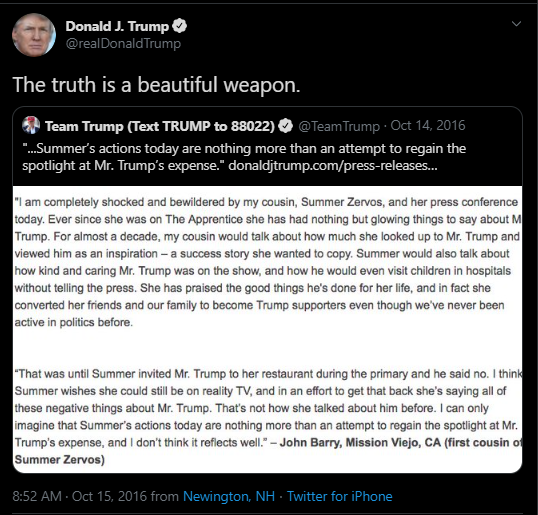 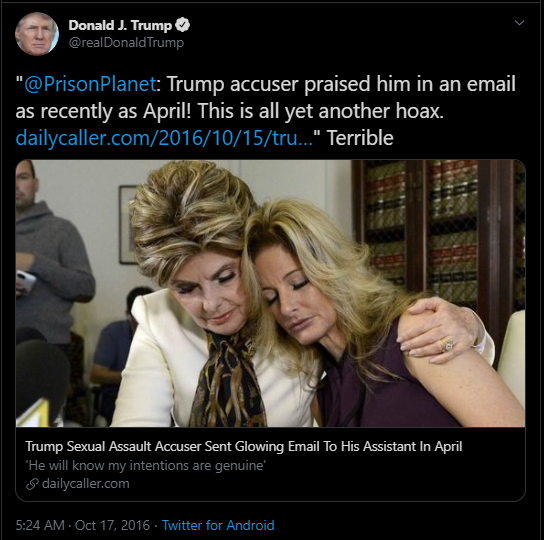 Zervos sued Trump for defamation for his own statements, for publishing Barry’s statement to his campaign website, and for the statements he retweeted with comments.

Throughout the litigation, the Trump team invoked Section 230. In addition to two examples I highlight below, Trump’s team reiterated their Section 230 defense in their October 2017 memo in further support of their motion to dismiss. In March 2019, a New York Appellate court ruled that Zervos’ defamation suit be allowed to proceed. A subsequent appeals brief, filed by Trump’s attorneys in May 2020, cites the “federal Communications Decency Act,” in support of preempting Zervos’ defamation claims.

In their July 2017 motion to dismiss, Trump’s legal team invoked Section 230 as a defense against the statements made by Barry and Watson. They argued that Trump is:

insulated from liability under Section 230 of the Communications Decency Act (“CDA”), which carves out broad immunities to providers and users of interactive computer services that do not provide the content of the posted information but exercise traditional publishing roles.

They add that the “CDA should be given an ‘expansive’ reading,” citing Asia Econ. Inst. v. Xcentric Ventures LLC.

In contrast to Section 230’s “broad” and “expansive” scope as Trump described it in 2017, Trump’s EO advocates for reading Section 230 narrowly. For example, the EO says:

As the title of section 230(c) makes clear, the provision provides limited liability “protection” to a provider of an interactive computer service (such as an online platform) that engages in “’Good Samaritan’ blocking” of harmful content. In particular, the Congress sought to provide protections for online platforms that attempted to protect minors from harmful content and intended to ensure that such providers would not be discouraged from taking down harmful material. The provision was also intended to further the express vision of the Congress that the internet is a “forum for a true diversity of political discourse.” 47 U.S.C. 230(a)(3). The limited protections provided by the statute should be construed with these purposes in mind. (emphasis added).

The Order then requires all executive agencies to “ensure that their application of section 230(c) properly reflects the narrow purpose of the section.” (emphasis added). In other words, Trump thinks Section 230 is broad and expansive when it benefits him and narrow when it applies to everyone else.

Additionally, Trump’s legal team argued that he cannot be held liable as a publisher of the retweets, even when Trump added his own editorial statements. They note that “it is well established that providing links to statements already published on the Internet, as President Trump did, is not actionable as a republication.” Further, Section 230 shields republication “even if the Internet user like President Trump, adds language to the republication.” (Ironically, the latter argument would also apply to any third-party content that Twitter links to in its fact-checks).

Again, the executive order conflicts with Trump’s 2017 litigation posture. The EO admonishes Twitter for “selectively decid[ing] to place a warning label on certain tweets in a manner that clearly reflects political bias.” It goes on to declare:

It is the policy of the United States to ensure that, to the maximum extent permissible under the law, this provision is not distorted to provide liability protection for online platforms that—far from acting in “good faith” to remove objectionable content—instead engage in deceptive or pretextual actions (often contrary to their stated terms of service) to stifle viewpoints with which they disagree. (emphasis added).

These statements, if accurate, would undermine Trump’s Section 230 defense. Trump not only “selectively decided to place” his own commentary on the allegedly defamatory Zervos tweets, he likely did so in an effort to stifle – or drown out – Zervos and her supporters. Also ironically, the executive order adds that when social media companies engage in this sort of behavior, “[t]hey cease functioning [as] passive bulletin boards, and ought to be viewed and treated as content creators.” Given that Trump did the same thing in his presentation of third-party content, he seems to be arguing in the EO that he should not have qualified for Section 230 in 2017.

In their September 2017 motion to dismiss, the Campaign’s legal team invoked Section 230:

Plaintiffs likewise cannot establish vicarious liability by alleging that the Campaign conspired with WikiLeaks. Under section 230 of the Communications Decency Act (47 U.S.C. § 230), a website that provides a forum where “third parties can post information” is not liable for the third party’s posted information. Klayman v. Zuckerberg, 753 F.3d 1354, 1358 (D.C. Cir. 2014). That is so even when even when (sic) the website performs “editorial functions” “such as deciding whether to publish.” Id. at 1359. Since WikiLeaks provided a forum for a third party (the unnamed “Russian actors”) to publish content developed by that third party (the hacked emails), it cannot be held liable for the publication.

In other words, the Trump Campaign argued that when a website, like Wikileaks, engages in publishing decisions, those decisions are considered “editorial functions” and are protected by Section 230. Yet, the executive order says that publication decisions are acts of censorship that foreclose Section 230. The executive order declares that websites engaged in “editorial conduct” should lose Section 230 immunity and “be exposed to liability like any traditional editor and publisher that is not an online provider.” So under the EO’s reasoning, Trump believes Wikileaks should not qualify for Section 230 for deciding to publish third-party materials.

On September 26, 2017, plaintiffs filed their amended complaint. The Trump Campaign reiterated its Section 230 defense in their October 2017 motion to dismiss. They invoked Section 230 again in their December 2017 reply in support of their motion to dismiss, adding “The [Communications Decency Act] trumps D.C. conspiracy liability, foreclosing Plaintiffs’ claims.” While Section 230’s application to conspiracy claims is unsettled, the executive order argues against such a broad reach. Instead, the EO claims that Section 230 should be limited to “torts such as defamation.” So Trump’s attempt in 2017 to apply Section 230 to non-defamation claims seemingly conflicts with the EO’s description of Section 230’s scope.

In July 2018, plaintiffs’ complaint was dismissed for lack of jurisdiction and improper venue. The plaintiffs refiled their complaint in the District Court for the Eastern District of Virginia. The Trump Campaign filed their motion to dismiss in November 2018, relying, once again, on Section 230:

Last of all, the Campaign has shown that that (sic) Plaintiffs’ claim that the Campaign conspired with WikiLeaks is not a conspiracy to commit an “unlawful act” because, under section 230 of the Communications Decency Act, WikiLeaks disclosure was not illegal. (Mem. 16–17.).

In January 2019, the Trump Campaign filed their answer to the complaint, citing Section 230 as an affirmative defense. In March 2019, the District Court dismissed the suit without reaching the merits of the Campaign’s Section 230 defense.

In a subsequent suit, the DNC, in April 2018, sued The Russian Federation along with the Trump Campaign and others for their alleged involvement in Russian email hacking and the publication of private information to Wikileaks.

In their December 2018 motion to dismiss, the Trump campaign invoked Section 230 immunity against aiding and abetting claims:

the Communications Decency Act (47 U.S.C. § 230) forecloses liability for a website that provides a forum where “third parties can post information”—which WikiLeaks is accused of doing here (by allegedly providing a forum for Russia to publish content it had obtained). Klayman v. Zuckerberg, 753 F.3d 1354, 1358 (D.C. Cir. 2014).

Again, without reaching the merits of the Campaign’s Section 230 defense, the suit was dismissed, with prejudice, in July 2019.

Trump has personally relied on Section 230 as recently as last month–the same month he issued his anti-Section 230 EO. Trump’s personal lawsuits reinforce Trump’s omnipresent weakness: he can dish it out, but he can’t take it.