This case involves the Peloton treadmill (“Tread+”). The treadmill has caused numerous personal injuries, and Peloton has recalled it. In this case, a 3 year old boy suffered personal injuries due to a Tread+ his dad bought. The dad, mom, and child sued Peloton for negligence and misrepresentation. Peloton invoked the arbitration clause in its TOS. The court’s resolution likely satisfies no one. 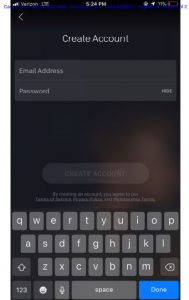 The specific evidence Peloton introduced of its TOS formation:

Defendants rely on declarations from Daniel Feinberg, a Senior Product Manager at Peloton, to establish that Mr. Stern registered for a Peloton account and accepted Peloton’s Terms of Service….

In the Supplemental Declaration, Mr. Feinberg (1) states that he is familiar with Peloton’s internal database, which it maintains in the ordinary course of business; (2) describes the process that transpires when a customer registers and agrees to the Terms of Service, including what account information related to that process is maintained by Peloton; (3) indicates he reviewed Mr. Stern’s account information, which shows that Mr. Stern registered for a Peloton account on August 25, 2019, and again on November 29, 2019, and as part of that registration process, was required to affirmatively agree to Peloton’s Terms of Service regardless of whether he registered on the website or mobile application; and (4) when Mr. Stern created his Peloton account in 2019, the registration process still required users to affirmatively click a button acknowledging they agreed to the Terms of Service

The court overrules the plaintiffs’ objections to this evidence. It’s a reminder that you must consider how you will introduce evidence of contract formation in addition to worrying about the contract terms and formation process.

The court discusses another topic I don’t often see discussed. The Federal Arbitration Act applies only to interstate commerce. “To the extent the contract pertains to use of Peloton’s Services (e.g., its app, website, and on-demand fitness classes), because those services require use of the Internet, the Agreement would involve interstate commerce.”

The Mom and Son

Peloton tries to bind the mom and son to the TOS via “equitable estoppel.” The idea is that sometimes nonsignatories get benefits from a contract sufficient to impose the contract terms on them anyways. But not in this case. The son is 3 years old. He lacks capacity to agree to the TOS, and he could disaffirm it even if he did. He got no benefits from the treadmill. Peloton’s TOS expressly restricted use by minors, and the 3 year old never used it. The story is the same for the wife: “Mrs. Stern never used the Tread+, nor did she benefit from it.” Thus, the nonparties cannot be swept into the contract. The court distinguishes the Nicosia v. Amazon and Tice v. Amazon rulings; but the result is consistent with the uncited BF v. Amazon case.

Abstracting from the nuances, the court’s ruling is obvious. Peloton can’t bind parties not in privity to the terms of its contract. That’s Contracts Law 101. Still, the consequences can be pretty significant in the IoT era. Many products can affect the rights of home residents and visitors who aren’t in privity, like voice-command and surreptitious video devices. This ruling reinforces the unlikelihood that the device manufacturer can reach those parties with its TOS–in some cases, raising questions about the devices’ permissibility under existing law.

In terms of this lawsuit, the dad’s case goes to arbitration but the wife and son’s cases remain in court. The dad signaled that he plans to challenge the arbitrability of his claims, so it’s possible the arbitrator will decide that the claims are outside the arbitration scope and bounce the dad’s case back to court as well. Another possibility is that the family decides to drop the dad’s claims altogether because the bulk of the case’s value likely rests in the son’s claims.

Otherwise, the parties are in a Mexican standoff. The family can proceed with the full set of claims only by litigating in two venues, which doubles the litigation costs for both sides and creates a risk of inconsistent judgments. Both sides would benefit from merging the cases back into one, but someone has to concede, and neither party has an incentive to do so. Another possibility would be to stay one case–likely the arbitration–until the resolution of the other cases to see what happens and decide if the second case is worth pursuing. Either way, the court’s “split the baby” decision (see what I did there? or too soon?) on arbitration was potentially a bummer for both parties.

Note: my wife is a big Peloton fan, and we own some stock in the company.