I’ve blogged some recent cases showing how it’s become really, really hard to win defamation cases over social media content (e.g., Rapaport v. Barstool). Still, online defamation claims can succeed, as this case shows. But even if the plaintiff wins in court, does it truly win?

On the job at Steak N Shake, Melissa White thought she found worms in hamburger meat, and insisted her manager inspect the meat. And when she didn’t find her manager’s inspection up to her own standards, White, perhaps cloaking herself as a modern-day Upton Sinclair, rushed to post her accusations of Steak N Shake’s purported sale of contaminated meat sales on Facebook. 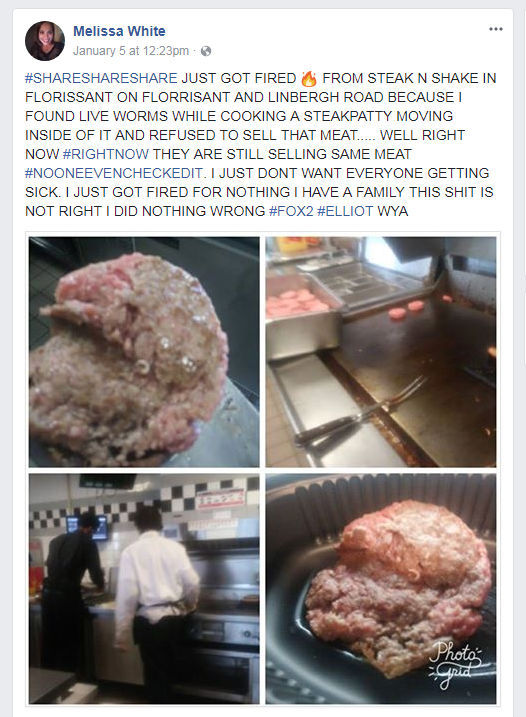 If you can’t read the text, it says:

#SHARESHARESHARE JUST GOT FIRED FROM STEAK N SHAKE ON FLORRISANT AND LINBERGH ROAD BECAUSE I FOUND LIVE WORMS WHILE COOKING A STEAKPATTY MOVING INSIDE OF IT AND REFUSED TO SELL THAT MEAT ……WELL RIGHT NOW #RIGHT NOW THEY ARE STILL SELLING SAME MEAT #NOONEEVENCHECKEDIT. I JUST DON’T WANT EVERYONE GETTING SICK. I JUST GOT FIRED FOR NOTHING I HAVE A FAMILY THIS SHIT IS NOT RIGHT I DID NOTHING WRONG #FOX2 #ELLIOT WYA

(This transcription is from the opinion. Notice how the court omitted any reference to the fire emoji. 😢)

The post went viral; it received over 36,000 shares and thousands of comments. Unsurprisingly, it’s offline now.

Steak N Shake wasn’t pleased with this post, and it sued White for defamation. The case went to a jury. The jury found for Steak N Shake and awarded $70,000 in compensatory damages and $10,000 in punitive damages. Last week, the court denied White’s requests for post-trial relief. The court shows little interest in overriding the jury’s determinations.

Yet, did Steak N Shake actually accomplish any of its goals? The damages award won’t affect its bottom line–and of course Steak N Shake won’t collect much, if any, of it (“Steak N Shake’s counsel even acknowledged in its closing argument that White likely did not have the financial resources to pay a large judgment”). The media coverage of this ruling will not come close to reaching the audience that White’s post did; as the old saying goes, “a lie can travel halfway around the world while the truth is still putting on its shoes.” So did Steak N Shake accomplish its goals?

Whether or not Steak N Shake’s food is in fact infested with bugs, today is another good day to choose to eat less meat and switch to plant-based options. On that front, Steak N Shake isn’t a venue of choice.