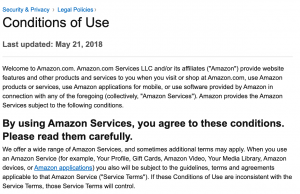 We blogged Nicosia v. Amazon in 2015 and 2016. (See “The “Browsewrap”/”Clickwrap” Distinction Is Falling Apart”; “Anarchy Has Ensued In Courts’ Handling of Online Contract Formation (Round Up Post).”) A recent Second Circuit ruling in favor of Amazon, while unpublished, warrants a mention.

This lawsuit involved weight-loss products, purchased on Amazon, which had been removed from the market at the FDA’s request. The district court initially found in favor of Amazon with respect to its argument that the claims belonged in arbitration. However, the Second Circuit reversed, on the basis that the terms which plaintiff agreed to when he created his Amazon account did not contain an arbitration clause. There was insufficient evidence that plaintiff had agreed to Amazon’s later terms containing an arbitration clause or that Amazon had provided plaintiff legally effective notice of an arbitration clause.

This time around, the Second Circuit rules in favor of Amazon. The reason? The court says that Amazon provided plaintiff notice of the arbitration clause when it first argued in the litigation (in 2014) that plaintiff’s claims were subject to arbitration. Since that date, plaintiff admitted to making at least 27 purchases through Amazon. This was conduct that “a reasonable person would understand to constitute assent.” Thus, while plaintiff claimed he never read the terms, the fact that he continued to make purchases on Amazon after receiving clear notice of the arbitration clause meant that he effectively assented to the clause.

Nicosia never disputed the existence of a broad agreement to arbitrate in Amazon’s conditions of use in effect after September 2014, or that Amazon’s checkout page continued to link to Amazon’s conditions of use after September 2014. The District Court determined that there was no dispute that Amazon’s conditions of use included an arbitration clause at all times since August 2011 or that the clause remained materially the same. Nicosia did not contest that determination below, and he does not do so now on appeal. Nor has Nicosia objected to the conclusion below that the 2011 conditions of use did not contain a temporal limitation on the disputes covered by the arbitration provision, or to the construction of the clause as applying retroactively, including in response to Amazon’s argument on appeal that we should affirm based on its post-litigation notice to Nicosia of the arbitration clause. Nicosia has therefore forfeited any arguments on these grounds.

The footnote in the Second Circuit’s ruling prompted me to take a look at the district court’s ruling after the initial reversal and remand. It’s lengthy, but covers a lot of ground in terms of online contracting law. It tackles a few issues that unfortunately don’t get much attention in the Second Circuit’s summary ruling: (1) the fact that Nicosia’s wife didn’t sign up for the account directly, but a friend signed up for her; (2) she initially signed up for an Amazon Mom account which then converted into an Amazon prime account; (3) Nicosia (the plaintiff) actually used his wife’s account to make the purchases in question. The district court’s ruling traverses so much ground that it tackles the password-sharing aspect of this dispute (citing Nosal!):

Password-sharing is a “ubiquitous, useful, and generally harmless” activity that “millions of people” engage in, United States v. Nosal, 844 F.3d 1024, 1048 (9th Cir. 2016) (Reinhardt, J., dissenting), but it cannot be used as a back door to undermine the contractual landscape governing internet commerce. Plaintiff protests that “Amazon anthropomorphizes [the] Prime account” and that it is “individuals … not inanimate objects,” who “consent to arbitration.” But the entire purpose of an “account” on a platform like Amazon is to assume virtual personhood—to enter into contracts and, crucially, to remain bound by the contracts to which it has previously, and with due authority, agreed. If the validity of these contract terms waxed and waned depending on the identity of the human user behind the screen, it would impose a cloud of uncertainty over any contract formed over the internet. Any individual could avoid the terms of a website by simply logging on to a friend’s or relative’s account instead of creating their own. Common sense dictates that this could not possibly be the rule; and where common sense goes, the law must follow.

Unfortunately, one thing that left me confused was whether there was truly a retroactivity issue here. The district court says that Amazon included arbitration in the terms as of August 2011, and Nicosia’s wife’s account converted to a Prime account on October 2012. The district court found that Nicosia was bound by the arbitration terms in place as of October 2011 (that pre-dated his purchases). The appeals court does not expressly adopt the district court’s reasoning on when Nicosia (or his wife) agreed to the arbitration clause. Instead, the appeals court says that Nicosia received notice of the clause in 2014 through the course of the litigation, and his post-notice purchases served as assent to the arbitration clause. The Second Circuit’s ruling presents a much starker retroactivity issue.

As hinted at by the district court, online services are ubiquitous. It seems unduly harsh to impute assent based on online purchases that may be for necessities. At a minimum, the court should have given greater attention to the retroactivity issue. Perhaps a purchase following the receipt of legal notice should be subject to mandatory arbitration, but should this allow Amazon to subject all of the plaintiff’s purchases for all time to arbitration? In the Second Circuit’s view: yes.

Ironically, the district court had thoughts on the whole online contracting issue, and its suggestion was for courts to scrutinize the substance of online terms more closely (something Nicosia did not seem to get the benefit of):

This Court suggests that Llewellyn had the answer: rather than scrutinizing hybridwrap agreements for contract formation issues, courts should recognize that such agreements, like other adhesive contracts, represent in substance a “blanket assent” to any terms that are not objectively unreasonable. Llewellyn, Common Law Tradition, supra, at 370; see also Restatement (Second) of Contracts § 211 cmt. f. Accepting this framework, such terms should be rigorously scrutinized for substantive unreasonableness, perhaps to a greater degree than they have been subjected thus far. See Robert L. Oakley, Fairness in Electronic Contracting: Minimum Standards for Non-Negotiated Contracts, 42 Hous. L. Rev. 1041, 1064 (2005) (finding that “the number of cases in which [unconscionability] has actually been found is relatively small”). True, where an arbitration agreement is concerned, a court’s latitude to declare certain provisions unconscionable, such as class arbitration waivers, is heavily circumscribed by the FAA, as interpreted by the nation’s highest Court. See Concepcion, supra. But as a general principle, a judicial approach which shifts the inquiry away from the formal trappings of the contract, e.g., notice and acceptance, to the substance of its terms, will much more readily honor the merchant’s legitimate commercial expectations while safeguarding the consumer from abuse.

NB: a vaguely topically relevant ruling from the Ninth Circuit dealing with whether claims arising out of Google’s AdWords program are subject to arbitration, despite the lack of an arbitration clause in the original AdWords terms: Trudeau v. Google LLC, No. 18-17022 (9th Cir. 2020). Unfortunately, this ruling was also unpublished.

Other coverage: “Amazon.com’s website and consent to arbitration—an important decision about a business model that particularly fits a pandemic”

“Anarchy Has Ensued In Courts’ Handling of Online Contract Formation (Round Up Post).”