Judge Rakoff: Embedding Social Media Content is a “Display” Under the Copyright Act 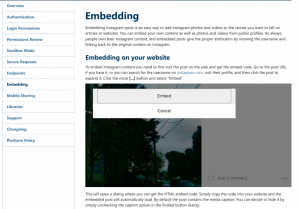 Paul Nicklen is a highly acclaimed nature photographer. He posted a video of an emaciated polar bear wandering the Canadian Arctic to his Facebook and Instagram accounts to sound the alarm on climate change. Nicklen “urged his social media followers to consider the ‘haunting’ and ‘soul-crushing scene’ and to take steps to mitigate the harms of climate change.” He followed with some suggestions on making change at an individual level and also urged his followers to follow the “@sea_legacy” account for further relevant info. (Background on SeaLegacy from Nicklen here: “How Two Dead Polar Bear Cubs Inspired a Movement“.)

Sinclair owns a bunch of television stations. It embedded the video as part of an article talking about the “starving polar bear going viral.” This article was posted on the Sinclair website and the video was embedded in the article. Nicklen alleges that the article (and embedded video) was posted to the website of various local affiliates of Sinclair.

Is Embedding a Display?: Under the Copyright Act, display

“means to show a copy of it, either directly or by means of a film, slide, television image, or any other device or process or, in the case of a motion picture or other audiovisual work, to show individual images nonsequentially.”

The first question is whether embedding the video on Sinclair’s website was a “display” that requires the permission of the copyright owner. The court (Judge Rakoff) looks to the history of the statute and notes that originally a more limited display right was contemplated but was put aside in favor of a broader display right. The court notes the language of section 106 reflects an intent to be “technology-neutral”.

Some of the arguments the court fielded:

Fair use: The court also grapples with fair use. Citing to Barcroft and McGucken, the court says that the “photograph itself is the subject of the story” so this weighs in favor of fair use. The second factor is neutral. The third factor cuts against fair use since the entirety of the video was used. Finally, the court says there is a real possibility of market harm to Nicklen’s work:

However, the Sinclair Defendants’ use of the copyrighted video, if widespread, would harm the licensing market for Nicklen’s video. There would be no need for news outlets to license the video at all if each outlet could, without Nicklen’s prior authorization, embed the video from Instagram or Facebook. Unlike a parodic use, widespread adoption of the Sinclair Defendants’ use could overtake the market for Nicklen’s video. Accepting as true Nicklen’s allegations that he licensed the Video to “almost two dozen entities both in the United States and throughout the world,” this factor weighs against fair use.

Use of content posted to social media has generated many posts on this blog, starting with AFP v. Morel. When writing about that case, I noted that use within the platform’s ecosystem is unlikely to create liability to downstream users. I also flagged that the server test likely insulates the embedding of social media content:

A sidenote on the implied license issue. There’s a big difference between “embedding” content or hot-linking — which courts would probably find is not infringing, based on application of the “server test” — and actually downloading/copying content to your own servers. The key question in this context is where is the content hosted. Check out Professor Goldman’s post on Perfect 10 v. Google and Amazon, as well as this post by Fred von Lohmann of the EFF for an explanation of the server test as it’s been treated by the Ninth Circuit. I haven’t taken a close look at Twitter’s latest “embedded tweets” feature, but I would expect that as with embedded YouTube videos, there’s no serious question of infringement here. There’s a world of difference between the embedded Tweets feature which Twitter recently rolled out, and what AFP did here.

Judge Rakoff joins other Southern District of New York judges, including Judge Forrest in Goldman v. Breitbart, in throwing a huge monkey wrench into the above. Instagram also did not help matters, as Tim Lee notes in this article: “Instagram just threw users of its embedding API under the bus.”

The court flags that the server rule may be key to the effective functioning of the internet, although it ultimately sweeps asides the concerns raised by Sinclair. This ruling of course won’t likely be the last word. The Brietbart case teed up the issue of embedding but ended with a whimper. Perhaps this ruling will end up on appeal to the Second Circuit (and beyond). As Eric notes, this ruling will get the attention of possible amici.

Separately, there’s a lawsuit pending against Instagram in the Northern District of California where copyright owners argue Instagram is liable for facilitating infringement on a large scale. Instagram has filed a motion to dismiss, but the briefing is not yet complete: “Instagram Asks Court to Delete Users’ Suit Over Embed Feature.” Does that lawsuit suddenly appear viable in light of the ruling in this case? (Venue as required by the terms of use aside, I wonder if plaintiffs in that case considered suing in the Southern District of New York?)

Eric’s Comments: The “server test” prioritizes form over substance, i.e., from the viewer’s standpoint, the image appears on their screen, and they don’t care where it came from or how it got there. But isn’t all of copyright law form over substance? (Except the Aereo case, which stands out as an outlier). The server test recognizes that all the linking site does is provide a pointer to a third-party source. It simply tells the viewer’s browser “there’s more stuff, and here’s where to find it.” This opinion doesn’t give full recognition to this technological architecture. I’m also troubled by this judge’s predictions about the lack of adverse consequences. The judge only heard from the parties; there are many more who absolutely will be impacted by the rejection of the server test, and they were not in court to express their interests. Assuming this case goes up on appeal, I hope amici will fill some of that information gap.