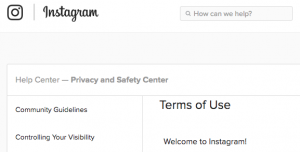 Sinclair is a professional photographer. Like many photographers, she posts photos to Instagram. Mashable wished to use a photo of Sinclair’s and asked for a license. Sinclair declined. Using Instagram’s API, Mashable then embedded the photo into its story. Sinclair demanded Mashable remove the photo. When it didn’t, Sinclair sued for copyright infringement.

Mashable argued that Sinclair posted the photo to Instagram, her profile was set to public, and Instagram’s terms of service allowed Mashable to embed the photo and display it on Mashable’s website. The court agrees.

Instagram’s TOS indicated that photos uploaded to the site and set to public are both searchable and subject to Instagram’s API. It did not matter that Mashable first sought a license from Sinclair:

Just as Mashable would be within its rights to again seek a license from [Sinclair], perhaps at a higher price, if [Sinclair] switched her Instagram account to ‘private’ mode.

Sinclair argued that Mashable is not an intended beneficiary of the Instagram TOS. The court says this would be relevant only if Mashable is attempting to enforce an agreement between Instagram and plaintiff. Sinclair also unsuccessfully argued the license terms were “circular,” “incomprehensible,” and “contradictory.” The court disagrees.

Finally, Sinclair also makes a policy argument that Instagram shouldn’t force professional photographers to be on its platform and either be private (and not fully take advantage of the platform) or be public (and have their photo’s licensed for use via the API). The court is mildly sympathetic but ultimately says it’s a choice that photographers have to make. And having chosen to post her content to Instagram, Sinclair can’t now complain.

This issue came up most recently in the Goldman v. Breitbart case involving embedded tweets. There, the district court ruled that embedding a tweet violates the copyright owner’s display rights. That ruling was appealed to the Second Circuit, which declined to hear it, and the parties ultimately settled. (Eric’s post on that ruling.) The court here says that, given the finding that any use was licensed, it need not reach the issue in Goldman v. Breitbart of whether embedding content pursuant to a platform’s license violates one of the rights of the copyright owner. (In the Breitbart case, the parties bifurcated the issues and consented to the court’s initial determination of the question of infringement. Given the settlement, the court never reached the issue of the scope of Twitter’s terms of use.)

The court doesn’t mention the slightly-more-on-point Haiti earthquake case (AFP v. Morel) which spawned numerous posts. There, media defendants tried to rely on the Twitter terms of service, but their use was outside the Twitter ecosystem. Accordingly, the Twitter terms didn’t provide cover. A key difference between Morel and this case is that here the use was within the ecosystem. The photo was displayed online and still lived only on Instagram’s servers. (Another difference is that in AFP v. Morel the copyright owner did not upload the images to the platform.)

This isn’t necessarily a shocking ruling. The court flags that photographers are in a difficult position. Indeed, Sinclair potentially had a self-help route: she could have set her profile to private, or perhaps deleted the post with the photo. The court doesn’t delve into what would have happened with the Mashable article in that instance. (Interestingly, her Instagram account is now set to private.) In any event, this case is a good reminder that it’s worth keeping tabs of the license terms on any platform to which one uploads content.

As Eric notes, the real issue is with Instagram’s lack of granular privacy settings for particular photos.

Instagram’s terms also do a less than stellar job of making clear to users that their content is freely usable via “web embeds”. This point is contained in the preamble to the “platform policy” which is not even specifically called out in the section of the Instagram TOS advising users that by posting photos, users “grant [Instagram] a license to use [those photos].” I would not go so far as to call the terms “incomprehensible” as Sinclair argues, but at an initial read, they are certainly less than clear.

Eric’s Comments: This case turns out to be really simple. Sinclair licensed the photo to Instagram, which sublicensed the photo to Mashable. Defense wins a motion to dismiss. However, as Venkat points out, the simplicity sidesteps numerous complexities that are common to this genre: is photo embedding an infringement? what if Sinclair hadn’t uploaded the photo herself, but instead a third party had done so? what if Mashable had tried to copy-and-paste the photo rather than embed it? what adverse consequences could come from Mashable’s copying after asking for permission and being denied?

Because the court was able to sidestep so many issues, we get a clean legal standard: you’re free to embed Instagram photos to the maximum extent permitted by Instagram’s API. We’ll see if that legal principle survives further legal proceedings.