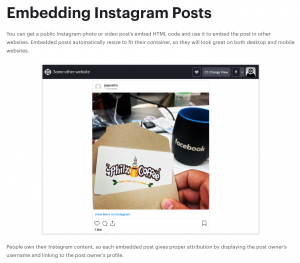 We recently covered Sinclair v. Ziff Davis, addressing whether Instagram’s terms of service authorize a third party to publish photos posted to Instagram by embedding those photos online. The court in that case initially said yes. However, the court’s reconsideration of its ruling, plus a recent ruling in another case (McGucken v. Newsweek), have undermined this conclusion. Two cases have also reached different conclusions about whether embedding photos constitutes fair use. Here’s a roundup of this legal tangle.

At a ten thousand foot level, the cases each involve a media defendant who publishes a photo online using an embed function made available by the platform to which the plaintiff uploaded the photo. When the user clicks on the link, the user will be taken to the account and page of the plaintiff. The photo is accessible without the end user having to click on the link and appears displayed on the defendant’s website (and can look like a photo within an article). The question is whether this use of the photo in this manner is infringing or is supported by a license. Those who exploited the content using the embed function either believed their use wasn’t one that required any sort of permission, or even if one was required, the platform’s terms of service granted the necessary permission. As a few recent cases demonstrate, that’s not necessarily the case.

McGucken v. Newsweek looked at whether Instagram’s terms granted a sublicense. It involved similar facts to Sinclair. Plaintiff was a photographer who uploaded his photos to Instagram and set his profile to public. He published a photo of the phenomenon of temporary lakes in Death Valley (due to rapid rainfall) to his public Instagram account. Newsweek published an article on the appearance of a new lake in Death Valley (also the subject of the photo). To illustrate the article, Newsweek embedded one of plaintiff’s photos. (The case focuses on Newsweek’s publication of the article online and doesn’t discuss any off-line use.)

Since Newsweek used Instagram’s API to embed the photos, Newsweek argued that it enjoyed a sublicense from Instagram and thus its use was not infringing.

The court cites to the Sinclair decision, finds it “well-reasoned,” and sees no reason to depart from Judge Wood’s ruling in that case. It agrees that Instagram has the right to sublicense the photos per its terms of use. Nevertheless, the court says that it’s not clear Instagram actually granted a sublicense to those such as Newsweek who publish user-submitted content using Instagram’s API. None of Instagram’s “various terms and policies . . . . expressly grants a sublicense to those who embed publicly posted content.” The court also says that the record does not support a finding at the motion to dismiss stage that there is an implied license.

After this ruling was handed down, the judge in Sinclair granted the photographer’s motion to reconsider. The judge said the court’s previous ruling did not adequately take into account that “explicit consent” that must be a part of a copyright license. The court says the Instagram terms hint at this, but it’s “not the only interpretation” of the language in question. Thus, while the terms allow Instagram to sublicense user content, it’s not clear that Instagram actually exercised this right (and granted a sublicense). That’s a fair conclusion. In the post on Sinclair, I noted that Instagram’s terms were less than clear about whether they granted a license.

Is Embedding Fair Use?

In the McGucken case, the court also rejected Newsweek’s fair use argument.

Considering all of the factors, the court rejects the fair use argument at the motion to dismiss stage.

Contrast that result with Walsh v. Townsquare Media, where the media defendant who embedded an Instagram post in an article successfully raised a fair use defense. (This is a Liebowitz case, for those following that saga.) There, XXL magazine ran an article about CardiB partnering with Tom Ford for a new lipstick shade. The article discusses various Instagram posts (the fact that Tom Ford posted about the new lipstick shade and Cardi re-posted Tom Ford’s post and followed up with one of her own). The article also talked about “heated debate” on the original post. The XXL article embedded the two posts and a repost discussed in the article.

The court initially notes (citing to the Breitbart case) it’s unclear whether embedding a post is a “display” of the post within the meaning of the Copyright Act. Nevertheless, even assuming the embedding by XXL was potentially infringing, the court concludes that embedding of the post was fair use.

Maybe Instagram felt a license was not necessary. I initially drafted this post wondering about Instagram’s position and rationale, but Eric pointed me to these excellent write ups from Tim Lee and James Grimmelman. Those contain a bombshell: Instagram went on record when it spoke to Tim Lee and stated Instagram does “not” grant a sub-license for its embeds API:

before you embed someone’s Instagram post on your website, you may need to ask the poster for a separate license to the images in the post. If you don’t, you could be subject to a copyright lawsuit.

As Professor Grimmelman notes, this is going to come as a total surprise to just about everyone. The title to Tim’s article notes that Instagram just “threw users of its embedding API under the bus.” Instagram is not a party to the litigation, so perhaps its lack of a definitive position is understandable, but it could have lent a hand to the defendants in these cases (and the numerous others that may come out of the woodwork). Professor Grimmelman notes that the practice of embedding having assumed that Instagram’s terms grant a license may now expose “a great many internet users . . . to serious and unexpected copyright liability.” That’s no exaggeration.

The underlying question lurking in these cases is whether embedding an Instagram post that continues to reside on Instagram’s servers even requires a license (beyond the one the user grants to Instagram) at all. The Breitbart case raised this question but unfortunately did not resolve it. The server test, articulated by the Ninth Circuit in Perfect 10 v. Amazon, stands for the proposition that a display of content online, while that content continues to reside on a third party server, is not a display within the meaning of the Copyright Act. The court in Brietbart criticized the server test. It’s worth noting that the server test originated in the context of a search engine’s display of content. This is a somewhat different factual setting than where a publisher or media entity displays the content. The cases have not hashed out whether the two practices are the same as a technical matter, and I can see the courts digging in in the context of evaluating the similarities or differences. If I were a judge, I’d want to know more about how these two practices may differ. Basically, these cases (and Instagram’s position) mean that the server test is about to get another workout in court. These cases will be widely watched.

The fair use rulings are also noteworthy. It would be tempting for the court to let the fact that the content is being embedded heavily influence the fair use analysis, but the courts do not take that approach. The Walsh case is more sympathetic to the fair use argument (and ends up finding fair use). As the court notes, this is due to the fact that the online activity was itself the focus of the story. It shouldn’t be read to mean that you can freely embed and claim fair use (as the McGucken case illustrates). Using a photo to illustrate an article and embedding the photo is not necessarily going to be viewed by courts as a slam dunk case for fair use.

The court in McGucken footnoted that Newsweek reached out (via a comment) on Instagram to seek permission to post the photograph. Given the procedural posture (a motion to dismiss), the court did not feel it appropriate to take this comment into account, but it is worth flagging. If the fair use ruling doesn’t ultimately go in Newsweek’s favor, discovery could be messy for Newsweek.