This case involves Warren Lotas sneakers that claimed to reinterpret one of Nike’s allegedly iconic sneaker stylings. The Fashion Law summarized the case, including this depiction: 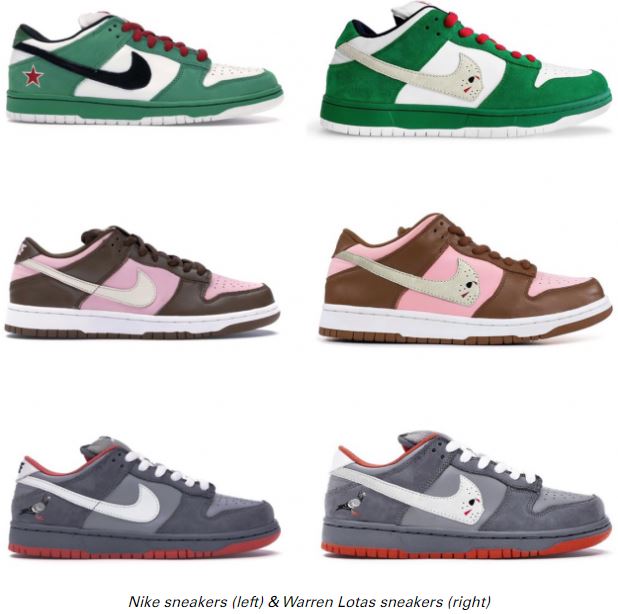 The sneaker similarities are obvious, which isn’t surprising because Warren Lotas styled its product as a “reinterpretation” of the original. The face-like design added to the swoosh is the primary and most visible difference, but there are numerous other minor differences throughout each design that I’m sure true aficionados recognize and care deeply about. For a non-aficionado like me, the similarities overwhelm the differences.

Nike sought a preliminary injunction. In response to Nike’s suit, Warren Lotas stopped taking orders and offered customers a refund or a credit towards a different sneaker, the Reaper. (It’s a little odd that Warren Lotas folded so quickly; did they not anticipate Nike’s enforcement action?).

In discussing the likelihood of Nike’s success on the merits, the court relied on the initial interest confusion doctrine (as usual, citations and parentheticals omitted):

Warren Lotas is likely to engage in initial interest confusion.

The analogy applies here, too. Warren Lotas took preorders for the WL Pigeon and Broccolini, both of which contain a similar design to the Nike Swoosh design mark, and then offered a refund or a different shoe. The “billboard” in this instance is the Warren WL Pigeon and WL Broccolini, both of which likely infringe on the Nike Swoosh design mark. Warren Lotas plans on benefitting from this initial interest in the WL Pigeon and WL Broccolini by now offering the Reaper to customers who preordered the WL Pigeon or WL Broccolini. It is irrelevant that Warren Lotas has informed these customers that the Reaper is not affiliated with Nike, because the initial interest confusion attached prior to that disclaimer. The fact that preorders have been taken, but no sneakers have been distributed, is also irrelevant. Warren Lotas is benefitting from the Nike Swoosh design mark by now intending to fulfill preorders that may have been obtained through initial interest confusion.

Ugh, this made me want to cry. First, Brookfield’s billboard analogy was always terrible, and I spent several pages explaining why…15 years ago. Second, the court tries to analogize how search engines process metatags (they don’t, but Brookfield assumed they did) are like knockoff physical goods, and that stretches a terrible analogy to the breaking point. Shoes are like billboards? Really?

I have Westlaw alerts set up on the term “initial interest confusion.” Nowadays, I see a handful of cases every year referencing the doctrine. Most of those cases simply acknowledge that the plaintiff invoked it. It’s rare to see a court engage the doctrine substantively, and it’s extremely uncommon for a court to actually rely on the doctrine. There have only been a handful of such cases in the past half-decade. That makes this case a noticeable, and unwelcome, outlier. I tried to declare the initial interest confusion doctrine dead in 2012, and I was mostly right. Unfortunately, these sporadic anomalies spark continued but unwarranted hope among plaintiffs.