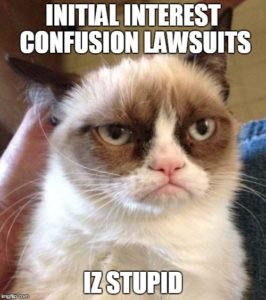 The plaintiff has a registered trademark for “CARE EVERYWHERE” for B2B healthcare software. The defendant, YourCareUniverse, also makes healthcare software. It extended its brand to include “YOURCAREEVERYWHERE” and launched a public-facing patient healthcare portal under the extended brand. The plaintiff sued for trademark infringement. The court runs through the standard multi-factor likelihood of consumer confusion test and finds most factors favor the defendant.

That should end the case, but no. As we see far too often with weak marks and weak infringement cases, “Epic attempts to save its claims by relying on the doctrine of ‘initial interest confusion.'” In response, the court issues a major burn: “The facts in this case bear no similarity to those in which a court accepted a theory of initial interest confusion as plausible.”

We still don’t have a consistent (or coherent) definition of initial interest confusion. This court applies the Seventh Circuit jurisprudence, which has historically provided a narrow scope for initial interest confusion. The court defines it as when “the defendant ‘lur[es] potential customers away from [the plaintiff] by initially passing off its goods [or services] as those of the [plaintiff’s] even if confusion as to the source of the goods is dispelled by the time any sales are consummated.’…The Seventh Circuit has summarized initial interest confusion as a “bait and switch” technique, in which a competitor will try to ‘get its foot in the door’ and affect a purchasing decision by confusing the consumer.”

All of Epic’s arguments fail:

* There is no evidence of luring: “defendants have provided compelling evidence that their adoption of the YOURCAREEVERYWHERE mark had nothing to do with Epic and Epic has presented no evidence that defendants have attempted to use their mark to lure any customers away from Epic.”
* There is no risk of diversion because “the purchasing decisions at issue in this case involve sophisticated consumers making expensive purchases often over a long period of time after acquiring much information….Epic has not articulated any plausible scenario under which a potential customer could be confused by defendants’ mark long enough to have any influence on a purchasing decision.”
* “Epic has presented no evidence that internet searches will produce misleading results”
* Any searchers will figure out the differences between the two enterprises: “defendants market YOURCAREEVERYWHERE along with other YourCareUniverse products and services and that it is generally clear from the context of the YOURCAREEVERYWHERE mark that defendants are the source”

So this is the part of the blog post where I rehash some of my many objections to the initial interest confusion doctrine. As this case shows, the doctrine is often relied upon by plaintiffs as a last ditch tool to prop up their cases; the doctrine gives plaintiffs false hope and encourages them to bring low-merit or meritless enforcement actions; and it’s costly to adjudicate the doctrine (this case is up to PACER entry #234), *especially* if it doesn’t change the result. We have seen very few successful assertions of the doctrine in the past half-decade-plus, suggesting that the doctrine has become mostly theoretical, not actually a common law doctrine that works in court. What will it take to wipe the doctrine out of existence entirely, rather than letting it continue to waste so much time and money?

I’ll close with a free tip for trademark owners. If success in your case depends on establishing initial interest confusion, DON’T BRING THE CASE.