This decision has everything—from sex toys with proprietary air pulse technology to Instagram influencers and Amazon astroturfing to illicit meetings inside the sauna of a well-known Las Vegas hotel.  Most exciting for this guest blogger, it appears to be the first published decision concluding that an influencer’s failure to disclose material benefit qualifies as a false or misleading representation of fact under the Lanham Act.

This post focuses primarily on the false advertising claim and related causes of action, which center on three sets of alleged false claims. First, EIS alleged that Defendants paid influencer Zoë Ligon, owner of a well-known sexual wellness store in Michigan with 70,000 Instagram followers, to publish false statements in an Instagram story. Specifically, her post claimed that the Satisfyer “ripped off the…technology of Womanizer” and is made of low-quality materials. In the Instagram story, screenshots of which are shown below, Ligon promised to stop carrying the Satisfyer in her store, said she regretted carrying it in the past, and discouraged other retailers from carrying EIS’s products. 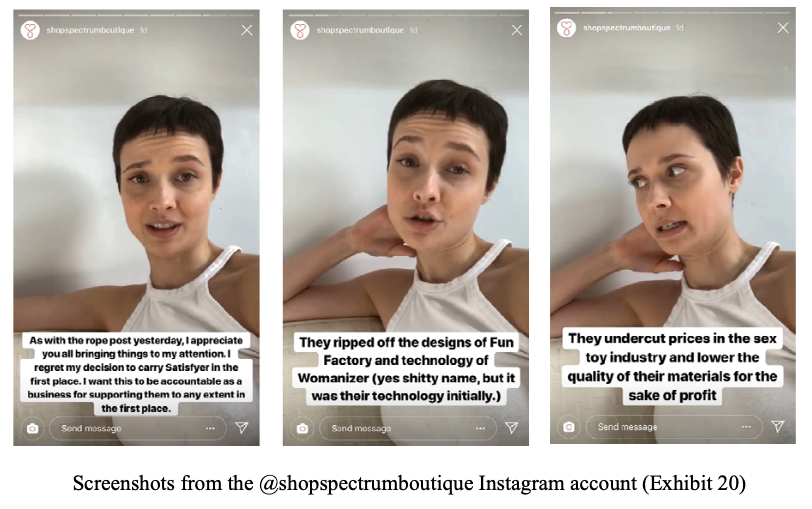 Second, EIS pointed to a number of reviews on Amazon’s US and German pages for the Satisfyer that contained false statements, including claiming that the product is not waterproof and calling it loud, difficult to operate, chemical-smelling, and painful to use. EIS alleged those reviews were written by or at the request of Defendants and linked the account profile responsible for at least some of those false statements to WOW Tech’s Amazon account.

Lastly, EIS alleged Defendant Novoluto contacted one of EIS’s distributors and accused EIS of infringing Novoluto’s patent rights by selling the Satisfyer Pro 2, despite Novoluto’s knowledge that it lacked enforceable patent rights in the US at that time. The distributor was concerned about the claim and asked EIS for a letter of assurance that its products did not infringe. EIS further alleged WOW Group took additional steps to discourage retailers from carrying Satisfyer products, including placing restrictions in some of its supply agreements and threatening other retailers outright, demanding they stop carrying Satisfyer products if they wanted to continue to carry Womanizer products.

In defending against EIS’s Section 43(a)(1)(B) claim, Defendants argued that the alleged false or misleading statements did not constitute commercial speech as required by the Lanham Act. As to the Amazon reviews, the court sided with EIS, who argued that the Third Circuit’s test for commercial speech was met: “(i) the reviews were advertising, as they were disseminated via the internet and discussed Plaintiff’s purportedly defective and poor quality products; (ii) the reviews refer[red] to Plaintiff’s Satisfyer products, as the reviews were posted on Amazon’s product pages for those products; and (iii) Defendants, as Plaintiff’s competitors, had an economic motivation for deterring customers from purchasing Plaintiff’s competing products.” Likewise, Ms. Ligon’s Instagram story “constituted commercial speech because Ms. Ligon is an industry insider and Instagram influencer and her story, which referred to Plaintiff’s and Defendants’ competing products, was a public advertisement…which Ms. Ligon had an economic motivation to share.” Those allegations were enough for the court to find the Instagram story and Amazon reviews might constitute commercial speech and deny the motion to dismiss on that basis.

My own research in this area suggests it’s not surprising that a paid influencer post would be found to satisfy the Lanham Act’s “in commercial advertising or promotion” requirement (of which commercial speech is only one part). The analysis is less straightforward for Amazon reviews, but in at least one case, a district court held a similar manipulation of Amazon reviews—in that case, by the defendant’s employees—to qualify as false advertising. See Vitamins Online, Inc. v. HeartWise, Inc., 207 F. Supp. 3d 1233, 1242 (D. Utah 2016).

The Defendants also challenged whether EIS sufficiently alleged falsity. Interestingly, rather than focus on the alleged false statements of fact—including that the Satisfyer “ripped off the…technology of Womanizer,” is made of low-quality materials, and isn’t actually waterproof as advertised—the court takes a different route. (The court does, however, tie the false statement requirement back to affirmative statements in the Ligon post and Amazon review in two footnotes). The court points out that EIS “alleges that the Amazon reviews were posted using an account that was associated with Defendants, and not by (as they purported to be) bona fide purchasers of Plaintiff’s product.” As for Ligon’s Instagram story, EIS “clearly alleges that Ms. Ligon was being paid to share her beliefs on her Instagram story – but that she did not disclose to readers her financial relationship with Defendants.” That Ligon failed to disclose that she benefited financially from her Instagram post and that the Amazon reviewers were not bona fide Satisfyer purchasers makes both sets of claims about the product, the court says, “at least misleading, and establishes falsity for purposes of a Lanham Act claim.”

According to FTC guidance, nondisclosure of material benefit likely runs afoul of FTC Act Section 5. But this may be the first case to construe influencer nondisclosure in and of itself as satisfying the Lanham Act’s false or misleading statement requirement. (The court notes EIS “alleges that Ms. Ligon was ‘hired or otherwise directed’ to post her statements, making her presentation of statements as if they were her own false or misleading.”).

Another recent case in the same court as EIS also denied a motion to dismiss a false advertising claim based in part on nondisclosure, but noted that omissions are not independently actionable; it held the claim should survive “because the accusations that the individuals failed to disclose their affiliation…are intertwined with allegations regarding the affirmative misstatements.” Liqwd, Inc. v. L’Oreal USA, Inc., No. CV 17-14-JFB-SRF, 2019 WL 10252725, at *10 (D. Del. Apr. 30, 2019).

Of course, the decision in EIS only denies defendant’s motion to dismiss, and there are plenty of affirmative false statements for Plaintiff to hang its hat on, but this moment in the decision seems to depart from prior case law. Nonetheless, as I argue in “False Influencing” and as some courts have recently demonstrated, influencer marketing provides unchecked potential for companies to disseminate false or misleading claims; it’s certainly possible that influencer nondisclosure itself can be both misleading and material to consumers’ purchasing decisions. Section 43(a)(1)(B) is capacious and it offers a promising avenue for redress.

The court also declined to dismiss EIS’s DDTPA and common law unfair competition claims. Under 6 Del. C. § 2532(a)(8) and (12), someone “engages in a deceptive trade practice when, in the course of his business, vocation, or occupation, that person: … (8) [d]isparages the goods, services, or business of another by false or misleading representation of fact” or “(12) [e]ngages in … conduct which similarly creates a likelihood of confusion or of misunderstanding.” Defendants again argued in connection with the Instagram story and the Amazon reviews that EIS had failed to plead plausible facts to show falsity; the court again disagreed. Defendants also argued that EIS failed to show loss of customers, but the court found sufficient EIS’s allegations that the false reviews and statements to retailers and distributors deprived EIS of sales and dissuaded actual and potential customers.

The court found the common law unfair competition claim overlapped with but was not redundant of the Lanham Act claim, since it included the allegation that Defendants falsely and in bad faith told distributors and retailers that EIS’s products infringed or likely infringed Defendants’ patents, harming EIS’s business interests. The tortious interference claim was based on the same set of facts, and the court was satisfied that EIS adequately alleged “Defendants knew of Plaintiff’s ongoing business relationships with its distributors and retailers; demanded that retailers stop selling Plaintiff’s products; and threatened to raise prices or cease sales if retailers did not give in to that demand; and further that, as a result, Plaintiff suffered and will continue to suffer ‘lost income, lost sales, lost profits, and damage to its goodwill associated with its brand and the Satisfyer product line.’” EIS did not need to identify a specific lost customer to avoid dismissal of the claim.

The CCPA, on the other hand, requires more specific pleading under Rule 9(b). Because, for example, the FAC did not allege with particularity which Defendant made the representations about patent infringement, to whom, or where or how the representations were made, the court dismissed the CCPA claim without prejudice so that EIS is free to amend it.

The inequitable conduct claims also require “the specific who, what, when, where, and how of the material misrepresentation or omission committed before the PTO,” along with sufficient allegations to infer that the individual making the false representations knew of the withheld material information (in this case, an English translation of particular Chinese patent that constituted prior art and the existence of an opposition proceeding before the German PTO) and specifically intended to deceive the USPTO. The court conceded that EIS has met its burden as to the what, where, when, why, and how, but had not established that the person who failed to disclose the material information is one who actually owed a duty of disclosure to the PTO based on his role in connection with the three patent applications.  (That person, ostensibly a director at both WOW Tech and Novoluto, is the one who demanded a meeting with the owner of EIS in the sauna of the Wynn Hotel so he could be certain their conversation was not being recorded; it was at that sauna meeting that he allegedly proposed price-fixing to share the US market.) The court therefore dismissed the inequitable conduct claims too without prejudice.

The antitrust claim in this case is a Walker Process claim, which requires the Plaintiff show a) that the defendant obtained the patent by willful fraud on the patent office and enforced it with knowledge of that fraudulent procurement; and b) all other elements necessary to establish a monopolization claim. The latter includes predatory and anticompetitive conduct, specific intent to monopolize, and a dangerous probability of achieving monopoly power. Because the court dismissed the inequitable conduct claims, it followed that it must dismiss the Walker Process claim as well. The court also agreed with Defendants that most of the other required elements were missing too. Of course, if EIS amends its claim, the court will be forced to reckon with the specifics of the market in “handheld devices for clitoral stimulation using pulsating air,” language which it daintily managed to avoid throughout this published opinion.