TL; DR: fair use supports another motion to dismiss a photo copyright case. A ruling of mild interest to copyright lawyers. However, the real reason you’re going to want to read this blog post is to learn why a court discusses Jon Hamm’s crotch at least 25 times (“underwear” = 12, “privates” = 7, “groin” and “loins” = 3 each; but no appearance of the words “commando” or “al fresco”).

Schwartzwald took the following photo of Jon Hamm and his then-girlfriend Jennifer Westfield: 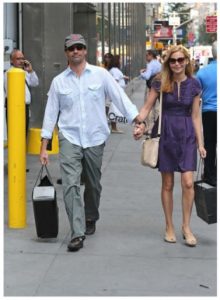 (Sorry it’s a thumbnail, but I’m trying to avoid being the next defendant). If you look super-closely at the original photo, which is included in the court opinion, you might notice a bulge on Hamm’s right pant leg that could be the outlines of his unholstered penis. According to Schwartzwald, the photo “illustrates what Jon Hamm looks like wearing trousers in public while he walks down the street, ostensibly without any underwear.”

On December 27, 2013, Huffington Post (now owned by Oath, the named defendant) published a fluffy clickbait listicle entitled “25 Things You Wish You Hadn’t Learned In 2013 And Must Forget In 2014.”

OK, back to the lawsuit. #24 on HuffPo’s year-end listicle is “Some ad men don’t do underwear” with the following text:

This year has been a busy one for “Mad Men” star Jon Hamm’s privates. Apparently he’s very blessed south of the border, and he, or those who examine photographs of him, really want you to know that. Hamm says he wants people to stop talking about his loins, but it might help if he’d put on some underwear.

This photo accompanied the entry:

(Yay, I can display a larger size because the court held HuffPo’s photo republication was fair use, so I have strong odds of getting fair use too).

As you can see, the HuffPo photo cropped out the girlfriend, cropped the photo’s top, cropped a little off the left, cropped off Hamm’s legs and bag, and superimposed the “image loading” box where Hamm’s penis is presumably bulging without any surrounding underwear. The photo in the court’s opinion doesn’t show it, but HuffPo turned the photo into an animated GIF and added the appearance of dots after the word “loading.” (I guess the image is still “loading” because Hamm’s penis is so large that it takes extra time to render…? Everything about the HuffPo article is so insipid).

Oath contends that its use of the Photograph was transformative because the superimposed text box, photo caption, title, and broader context of the article fundamentally transformed the character and purpose of the use. The Court agrees. Unlike the original Photograph, which Plaintiff claims had the objective purpose of “illustrat[ing] what Jon Hamm looks like wearing trousers in public while he walks down the street, ostensibly without any underwear,” Oath’s use of the Photograph served the dual purpose of mocking both Hamm and those who found the Photograph newsworthy in the first instance. The text box with the words “IMAGE LOADING” in all caps—a play on words that alludes to both the nature of digital technology and the body part at issue—suggests that Oath is making fun of Hamm, not merely “illustrating” his appearance. Moreover, as described above, the headline of Oath’s article—25 Things You Wish You Hadn’t Learned in 2013 and Must Forget in 2014—makes clear that the broader purpose of the article is to poke fun at events, trends, or topics that went “viral” in 2013. The text immediately preceding the Photograph reinforces the Court’s conclusion that the article aims to mock the public fixation on Hamm’s “privates” in addition to mocking Hamm himself. It states:

This year has been a busy one for “Mad Men” star Jon Hamm’s privates. Apparently he’s very blessed south of the border, and he, or those who examine photographs of him, really want you to know that. Hamm says he wants people to stop talking about his loins, but it might help if he’d put on some underwear.

The caption thus twice references the public’s focus on revealing photos of Hamm—first, by describing “those who examine photographs of” Hamm, and second, by declaring that “Hamm says he wants people to stop talking about his loins.” This caption, when viewed in the context of the article’s larger focus on viral moments, demonstrates that Oath used the Photograph in part to mock the fact that the Photograph went viral to begin with. The Court thus concludes that the derivative use of the Photograph in Oath’s article served two purposes that are distinct from that served by the original Photograph.

Plus, HuffPo hid the key bits: “By superimposing a text box over Hamm’s groin area, Oath obscured the specific part of the Photograph that allegedly reveals [whether or not Hamm is wearing underwear]. A reader of Oath’s article would thus not be able to see the very thing the Photograph purportedly illustrates beneath the strategically-placed text box—and what sets the Photograph apart from most other photographs of Hamm.”

Thus, like Yang v. Mic, “the Photograph was ‘used to illustrate what all the fuss is about,’ namely Hamm’s ‘privates’ and the public’s fixation with them, which is a different use of the Photograph than that intended by Schwartzwald.”

(At this point, I’m 100% on Team Hamm that people really should “stop talking about his loins”).

Thus, HuffPo changed the photo enough to transform it:

Oath did not simply add a border, hashtag, or make another minor alteration to the Photograph. Instead, as described above, it cropped approximately half of the image, superimposed a comedic text box over the key portion of the Photograph (Hamm’s groin area), placed a witty caption above the Photograph, and placed it within the context of a larger article about “viral” moments or trends

The fact that HuffPo is a for-profit publisher didn’t outweigh the transformativeness.

Second Factor: Nature of the Work: The court says the photo is more factual than creative because it’s “a standard paparazzi-style photograph of a celebrity walking in public.” Cite to Barcroft.

Third Factor: Amount and Substantiality of Portion Taken: HuffPo cropped half the photo and superimposed the text box. The court rejects the mockable argument that HuffPo could have recreated the photo–the whole point was to show Hamm casually running his daily chores without underwear, so any recreated photo wouldn’t suffice.

Fourth Factor: Market Effect: HuffPo’s use is transformative, and potential purchasers aren’t likely to prefer their version over the original, especially when the text box hides the goodies.

Conclusion: Schwartzwald loses; case dismissed. Ordinarily, whenever I see a successful fair use defense on a motion to dismiss, I think it’s a great candidate for a 505 fee shift. However, because the first factor partially weighed towards Schwartzwald due to HuffPo’s commerciality, I doubt the judge would grant the fee shift.

Personnel note: I know you’re puzzled by the judgment of any copyright plaintiff’s lawyer who loses to fair use on a motion to dismiss. But even without being told, you already know who did this. Richard Liebowitz has been a one-man architect of an ever-growing wall of defense-favorable copyright precedent. 🙏🙏🙏 Remarkably, Liebowitz apparently hasn’t lost his license to practice in SDNY yet, though I wonder if that is inevitable.