There Is Essentially No Statute of Limitations for Online Copyright Infringement–APL v. US

This case involves a photo of stem cells, which allegedly used to be quite uncommon and therefore allegedly commanded a premium license fee. So you can see what’s worth litigating in federal court against the mightiest government in the world, I’ve included a small thumbnail that obviously qualifies for fair use (so please don’t sue me). You can also see the photo in the court opinion. The photographer took the photo in 1996. For unspecified reasons, NASA posted the photo to its website in August 2004. NASA last updated that page November 2007.

The photographer registered the photo’s copyright December 20, 2007 (VA 1-426-177). According to the registration, the photo was published no later than October 2001, so the registration was made well after the deadline to qualify for statutory damages and attorneys’ fees. 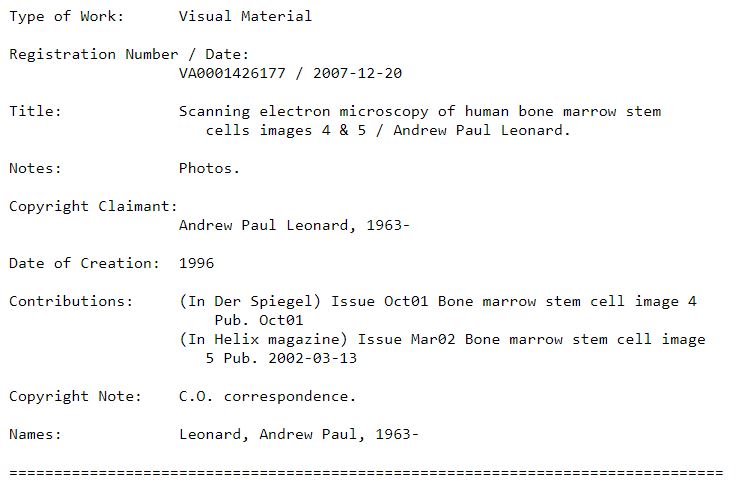 The photographer sued NASA for copyright infringement on December 3, 2018.

The economics of this lawsuit baffles me. Without the availability of statutory damages or attorneys’ fees, the best-case payoff will be actual damages. Due to the statute of limitations (more on that in a moment), only up to 3 years of damages are available. How much could that be? Ordinarily, a 1-year license fee for a high-end photo is in the $1k range, in which case the photographer would get a maximum of $3k of total damages. At that level, this lawsuit is surely a major money-loser for the photographer.

The photographer may have stars in his eyes after a major 3d Circuit win in 2016 (the “Stemtech” case), which affirmed a massive damages award of $1.6M over two photos, including the one at issue in this case. The 3d Circuit’s Stemtech opinion has a number of obviously problematic aspects, so I’m not sure if the photographer will be able to replicate that stunning success here. Furthermore, the Stemtech ruling involved 92 alleged instances of infringement, yielding damages of $17k per infringement. If there’s only 1 infringement at issue in this case (which I think is the case), I still don’t see how this case makes economic sense. [If the plaintiff claims that each download is a separate infringement, or similar nonsense, then the $1k/yr license fee or damages of $17k/work won’t be analogous].

Beyond the damages issue, this case seems to run straight into copyright’s 3 year statute of limitations. The photographer sued 14+ years after the initial publication. This should be a super-easy defense win, right?

Nope. The Supreme Court’s Petrella v. Metro-Goldwyn-Mayer decision (misspelled throughout the opinion as Petralla) essentially gutted copyright’s statute of limitations. There isn’t a “single publication” rule in copyright, unlike defamation and related torts, so the statute of limitations doesn’t start with the initial publication. Instead, the last instance of infringement sets the statute of limitations. In an online context, the last infringement likely will be the last date on which the file was viewed/downloaded. This means a long-forgotten web page last modified over a decade ago can still support a lawsuit if a single viewer accessed the page within 3 years before the lawsuit. The court explains:

Reproduction Right. NASA “reproduced” the work when it uploaded the photo to its servers in 2004. However, NASA did not “reproduce” the work with each download. The opinion implies that web visitors only display the work rather than copying it when they access the page.

In a footnote, the court says “if a user downloads a copy of the displayed work from the webpage, the user may be liable for direct infringement of the copyright owner’s reproduction right.” I’m not sure if the court is contemplating the ordinary operation of web browsers, which necessarily make copies of web pages as part of rendering them, or if the court was thinking of a more affirmative downloading action like right-clicking on the image to save it. The court doesn’t resolve this ambiguity because any infringement by the user is irrelevant to this lawsuit. The US government’s waiver of sovereign immunity for copyright infringement doesn’t extend to secondary liability for third-party infringement, so the government couldn’t be sued for users’ web browsing even if it were infringing.

All told, because NASA’s only “reproduction” took place in 2004, the statute of limitations apply to the reproduction-based claims.

Distribution. Echoing the BMG v. Cox case, the court says that simply making works available does not constitute distribution. Instead, distribution occurs with “actual dissemination of either copies or phonorecords,” including “the act of transmitting the webpage—and the Work therein—to a user.” If the photographer can show that NASA made any transmissions of the photo within the statute of limitations, NASA violated the distribution right.

Display. “[E]ach unauthorized showing of a Work through a computer infringes on the owner’s right of public display… each time a user viewed NASA’s webpage, APL’s copyrighted Work was displayed on the user’s computer. Consequently, each of these displays constituted a separate infringement on APL’s right of public display” (cite to Perfect 10 v. Amazon). Pay special attention to the court’s passive voice here: “APL’s copyrighted Work was displayed.” The court never says that NASA, as opposed to the users, displayed the work.

Copyright nerds surely will enjoy the detailed analysis of each 106 right, but in the end, the court’s fine parsing shouldn’t affect the outcome. Whether it’s called reproduction, distribution, or display, if NASA engaged in any of 106-prohibited conduct within the statute of limitations, it committed copyright infringement. (Admittedly, some of defenses may apply only to specific 106 rights, like the first sale defense applying the distribution right, but I don’t think any right-specific defenses are an issue in this case). In other words, NASA had to navigate all of the 106 rights to defeat the infringement element. And typically, the damages will be the same whether the infringing conduct violated one or all of the 106 rights.

The court’s analysis doesn’t mean that online publishers never can benefit from copyright’s statute of limitations. By removing a file from its servers and preventing any further downloads, the publisher can start the SOL clock ticking. Petrella emphasized the laches defenses, and moldy-oldy cases like this one make a laches analysis inevitable. The court didn’t discuss laches, and I assume NASA can still raise it. Apropos to laches, the Stemtech case noted that “[t]o make sure his images were not used for unauthorized purposes, Leonard ‘periodically’ conducted internet searches for images of stem cells,” including finding Stemtech’s activity in 2007. So I’m sure the government will have plenty of questions about how his 2007 searches didn’t locate the photo on one of the world’s most heavily trafficked sites. Other defenses, including fair use, should still be on the table as well–and I think those will look stronger for an organization like NASA than a for-profit company like Stemtech.

Regardless of how this case turns out, this lawsuit highlights how even decades-old postings can be copyright litigation bait. And your evergreen reminder that freelance photographers and “plaintiffs” are usually synonyms.

Related posts on the copyright statute of limitation:

* A Photographer Sued a (Former) Student Over a School Project. Guess How That Turned Out–Reiner v. Nishimori

Related posts on whether web browsing is infringement:

← Reminder: The Copyright Office Will Be Yanking Eligibility for the DMCA Online Safe Harbor (Again)
Emojis Have Unsettled Grammar Rules (and Why Lawyers Should Care) →
Subscribe to Blog via Email
Categories