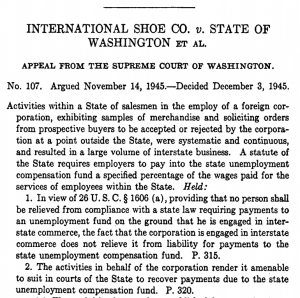 AMA Multimedia sued Marcin Wanat, Maciej Madon, and MW Media, a Poland-based partnership. AMA was only able to serve Wanat, so he’s the only defendant in the lawsuit. He moved to dismiss for lack of personal jurisdiction in the United States. The district court agreed. The Ninth Circuit affirms in 4 opinions from a 3-judge panel: a consensus opinion, two concurrences (one from the author of the consensus–it’s unusual for the author of the lead opinion to write an opinion concurring with him/herself), and a dissent.

“ePorner” is a site featuring adult videos uploaded by users. As the court describes it, MW Media (the partnership) operates ePorner, and “[t]hrough MW Media, Wanat assisted in the operation of ePorner.” Wanat had registered “eprncdn.com” and “epornergay.com,” both of which forwarded users to ePorner, through GoDaddy and Domains by Proxy (located in Arizona). He did not register the ePorner.com domain name.

The Jurisdictional Analysis: The question before the court is whether Wanat’s acts reflected “purposeful direction” towards the United States or “purposeful availment” of the benefits of the forum. This is like a typical jurisdictional analysis involving an out-of-state defendant, except the analysis involves the United States as a whole instead of looking at whether the defendant’s act target a certain state.

The court cites to Calder v. Jones (which set forth the “effects test”) and Mavrix Photo v. Brand Techs (a fairly recent application of the test). Mavrix involved celebrity photos, and the defendant there ran a website that focused on the “California-centered celebrity and entertainment industries.” The plaintiff was not based in the State of California. The court highlighted the relationship between the content and the forum generally and found that the defendant’s alleged exploitation of Mavrix’s copyrighted material was “part of its exploitation of the California market for its own commercial gain.” The court here distinguishes Mavrix because nothing in ePorner’s subject matter necessarily targets the United States. Additionally, while the complaint alleged that ePorner featured (allegedly infringing) content from United States-based producers and actors, this doesn’t necessarily mean that ePorner is focused on exploiting the United States market. The court notes that the content to the site is uploaded by users. While it is foreseeable that ePorner would attract a significant consumer base in the United States, this is not sufficient for minimum contacts. The court also distinguishes the case from Mavrix based on the respective websites’ differing “advertising structures”. In Mavrix, “website hits from Californians translated to more advertising revenue from the site’s California advertiser.” In contrast, ePorner merely tailors ads based on the locale of the user. “Wanat does not control the advertisements shown on the site.”

The court says that the other contacts also do not establish express aiming.

ePorner’s TOS: AMA apparently argued that the roughly 20% of United States-based users formed agreements with ePorner under United States law and this is satisfies the express aiming requirement. The court disagrees. This dispute does not arise under ePorner’s terms. (The terms merely state that the site content is “subject to copyright and other intellectual property rights under United States, Canada and foreign laws and international conventions.”)

The Discovery Dispute, and Privacy Shield: The district court denied certain jurisdictional discovery to AMA on the basis that disclosure of certain personal information by ePorner in response to AMA’s discovery requests could expose Wanat to criminal liability under Poland’s Personal Data Protection Act of 29 August 1997.  The district court appointed a special master and the parties rallied their own experts in Polish law to brief the issue. The special master concluded that the PDP’s safe harbor provisions do not allow for transfer of data to the United States. Under the EU’s “Schrems” decision, the U.S. does not ensure a level of data protection that meets with EU standards.

AMA argued that the Special Master’s conclusion ignored the EU’s “Privacy Shield Decision”—since invalidated—which did allow for transfer of data (based on “Standard Contractual Clauses”) to the United States by entities in the EU. The court says that AMA didn’t raise this issue in front of the special master. Similarly, while the appeal was percolating in the Ninth Circuit, the EU adopted GDPR, which AMA argued also legitimized the transfer of the requested information. Because the court says these arguments were belatedly raised, the court declines to consider either the Privacy Shield Decision or GDPR as possible bases for Wanat to respond to the subpoena without being subject to liability.

The court says that “exceptional circumstances” warranting the court’s consideration of these arguments, despite them not being raised below, are not present.

Judge Ikuta’s and Nelson’s Concurrences: Judges Ikuta and Nelson disagree as to whether the district court can take further action on remand or whether the case is just dead, given the court’s jurisdictional ruling. Judge Ikuta says “this case is over.” Judge Nelson says “perhaps the door remains slightly open for further proceedings on remand.” For example, on remand, the district court may want to allow AMA to amend its complaint or to address the effect of GDPR or the Privacy Shield Decision on the jurisdictional rulings below. Judge Nelson also flags that the district court could consider whether MW Media’s and Madon’s contacts may be imputed to Wanat.

Judge Gould’s Dissent: Judge Gould sees Wanat’s U.S.-contacts as easily sufficient to confer jurisdiction. In his view, the decision threatens the ability of United States courts to hold foreign tortfeasors liable for their acts. Judge Gould quotes extensively from Mavrix and says the allegations point to the “straightforward conclusion” that the United States “audience is an integral component of [ePorner’s] business model and its profitability.” The advertising and user base is sufficient, but ePorner’s use of a U.S.-based DNS company seals the deal.

Judge Gould notes that the majority’s finding is based in part on Walden v. Fiore, a 2014 Supreme Court case where the Court instructed that foreseeability alone is insufficient and that the focus should be on the defendant’s own contacts with the forum state. He disagrees that under Walden, Wanat’s contacts would be insufficient. First, foreseeability of harm to the plaintiff relates not to express aiming but to the third prong (whether the defendant caused harm that it knows is likely to be suffered in the forum). Individualized targeting will not on its own establish jurisdiction after Walden, but it’s a factor. Second, Walden means that while a plaintiff may not rely on a plaintiff’s contacts with the defendant and the forum to drive the jurisdictional analysis, a defendant’s contacts with its users do not fall into this category. Here, ePorner’s contacts with the users are independent of the plaintiff, and demonstrate exploitation of the relevant market for commercial gain such that personal jurisdiction is proper.

This ruling reaches the opposite result to a recent Fourth Circuit case based on very similar facts: UMG Recordings v. Kurbanov. Kurbanov also involved an off-shore site alleging infringing U.S. copyrights, which had a material user-based in the United States. As in this case, relevant domain names were registered through GoDaddy. The defendants also registered registered agents under the DMCA, and the sites used AWS. The court says these are sufficient to confer jurisdiction over the non-resident defendant. The court considered both jurisdiction as to the United States as a whole and the State of Virginia and went with the latter. Here’s Eric’s reaction to that case:

This looks like a slam dunk for the defense. A globally available website located overseas has done nothing to specifically engage with Virginia other than to be popular on the web. The lower court sensibly dismissed the case for lack of personal jurisdiction. The Fourth Circuit reverses and remands the case for further consideration.

Kurbanov requested an en banc rehearing, but that was denied late last month.

The multitudinous opinions in the AMA case may draw the interest of other 9th Circuit judges when AMA files its inevitable request for rehearing. The direct conflict with Kurbanov should also be influential.

I found Judge Gould’s position persuasive. If Mavrix is still good law, it’s tough to argue that there’s no personal jurisdiction under Mavrix. His extensive quotations of language from Mavrix was particularly effective. Unfortunately, the 9th Circuit didn’t directly confront whether Walden v. Fiore, which came after Mavrix, left Mavrix intact, and that’s one big question. The panel opinion should have confronted this question directly, rather than relegating it to a footnote. (The 9th Circuit’s ruling in Axiom Foods, a 2017 case also involving a foreign defendant, discusses Mavrix and Fiore, and follows Fiore.)

The parties spend a lot of time worrying about geo-targeting and generally whether the targeting of advertising to the forum residents reflects purposeful availment. Mavrix relied on this heavily, but the panel ruling in this case is more agnostic on the role targeting. I tend to agree with Judge Gould on this one as well. Targeting is merely anecdotal evidence that the business is trying to court users from the forum. The real question is whether there are material users from the forum. On that count, the fact that the defendant in this case used the DNS service which is expressly sold as a service designed to make the site easier to access for U.S. users, should have been more decisive.

The discovery issue is a noteworthy one, but perhaps it’s a sleeper. Unfortunately, it’s not teed up for consideration, and the court ends up punting on it. It’s a big deal for a court to allow a party to use a foreign data privacy rule to block civil discovery. It seemed like the district court spent a lot of resources analyzing this question, including the appointment of a special master, but from a 10,000 foot perspective, surely there was a way to get AMA the data it wanted for jurisdictional discovery without forcing Wanat to disclose personal details about the users? If the district court allowed Wanat to use Poland’s data privacy law to block this discovery entirely, that seems like the wrong result for a lot of reasons.