I have been a vegetarian for 35+ years. Over the past 15+ years, I have shifted towards being vegan. I eat virtually 100% vegan in the home and always prefer vegan options when they are available. My embrace of veganism has partially coincided with the proliferation of vegan restaurants and grocery store options. We live in a golden era of vegan/”plant-based” mass-market products, with a wonderful diversity and quality of options that put to shame Loma Linda’s 1980’s-era canned vegetarian hot dogs packaged in water. Thus, I am personally upset and angry when our government, using our tax dollars, tries to thwart market demand for vegan products that make my life better. See my comments to the FDA on this issue.

Today’s case is another entry in the “Oleo War” that started in the 19th century. For decades, dairy producers have weaponized the law to suppress margarine/vegetable oil-based alternatives. Wisconsin, the “Dairy State,” is particularly well-known for anti-margarine regulations–when I lived there, restaurants could put butter on the table but customers must request margarine (I believe that law is still in place). Over the past 150 years, virtually every regulatory move made in the Oleo War reflects dairy industry rent-seeking, not consumer protection. At this point, given that history, we should instantly question the motives of any government crackdowns on non-dairy alternatives to butter. 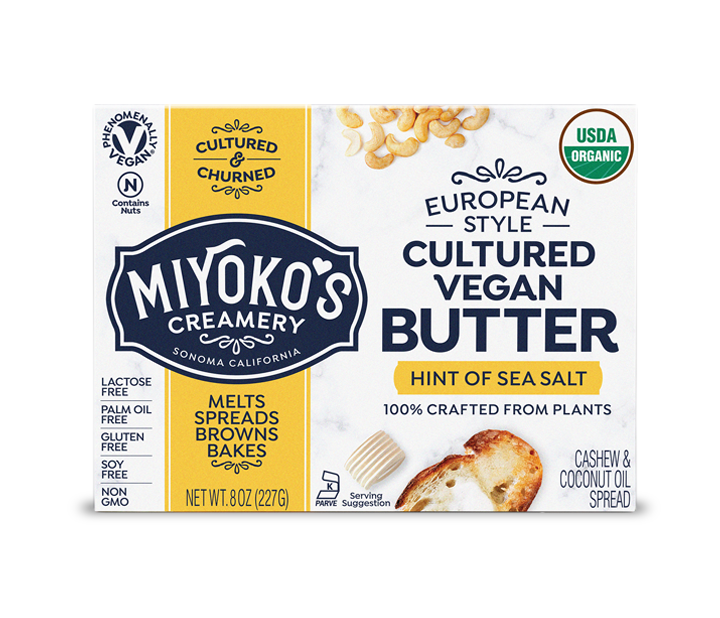 Is there any doubt that this is not dairy butter? The packaging displays all of the following:

Any one of those would probably be enough to educate consumers, but collectively, the non-dairy status of this product is impossible to miss. Nevertheless, the California Department of Food & Agriculture demanded that Miyoko’s stop calling its product vegan “butter” because the applicable statute defines butter as a product “made exclusively from milk or cream, or both . . . and containing not less than 80 per centum by weight of milk fat.” On First Amendment grounds, Miyoko’s sought an injunction against the department’s enforcement. The judge grants a preliminary injunction.

1) Other courts have found that plant-based product name aren’t misleading, including:

Hampton Creek’s “Just Mayo” vegan product reached a different conclusion, but it never clearly indicated its plant-based origins and displayed an egg on its packaging.

The state argued that “butter” is linguistically different than “milk” or “meat” because neither has a well-established vegan analogue in the same role as margarine. The court says that plant milks belies that argument.

2) The evidence of consumer confusion about plant-based alternatives is “empirically underwhelming.” The state didn’t introduce any empirical studies. Miyoko’s did, and it showed:

The state said this study shows 26% of consumers misunderstand the source of plant-based cheese. The court correctly notes that 19% misunderstand the source of “animal-based” cheese, so the net confusion is 7%. So the study supports a conclusion that “consumers are perhaps a bit better at identifying traditional cheeses than vegan cheeses, and perhaps a (roughly equivalent) bit better at identifying vegan milks than traditional milks.” [I have a slight objection to the term “traditional” because that reflects a cultural bias, but I understand the court’s position.] Furthermore, “the State [did not] present testimony from a shopper tricked by Miyoko’s vegan butter, or otherwise make the case for why Miyoko’s substitute spread is uniquely threatening to the public weal.”

For these reasons, the court enjoins the state from enforcing its restrictions on Miyoko’s use of the term “butter.”

While I resent the state using my tax dollars to blatantly advance the commercial interests of the dairy industry, I am especially angry that the state is spending its time, money, and attention pursuing a non-issue like “vegan butter” instead of the half-dozen existential threats jeopardizing our society RIGHT NOW. Our government’s priorities perplex me.