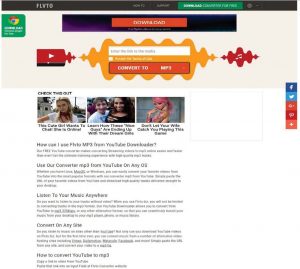 The plaintiffs brought a copyright infringement lawsuit in the Eastern District of Virginia federal court. The defendants include FLVTO and 2conv, two Russian-based websites that enable users to engage in stream-ripping of YouTube videos and other sources (i.e., extracting the audio feed from a video). The site operator outsources the websites’ ad inventory to ad brokers, including two in the Ukraine and two in the US. The plaintiffs claim that the ads are geotargeted, though it’s unclear if the site operator has control over how and where the geotargeting works.

The sites allegedly pull in major traffic–300M global visitors/year from 200 countries, of which 30M are from the US (ranking 3rd most popular for FLVTO and 4th for 2conv). About 2% of each site’s U.S. traffic comes from Virginia, ranking as the 13th most popular state for FLVTO and 11th for 2conv.

The defendants’ other ties to Virginia (or the US more generally):

I mean, really? This looks like a slam dunk for the defense. A globally available website located overseas has done nothing to specifically engage with Virginia other than to be popular on the web. The lower court sensibly dismissed the case for lack of personal jurisdiction. The Fourth Circuit reverses and remands the case for further consideration.

Purposeful Availment. Referencing Zippo 🤮, the court says “the Websites are certainly interactive to a degree, since they collect certain personal information from visitors and visitors must agree to certain terms and conditions in order to access downloadable files.” Pretty much every website would have this level of interactivity by collecting IP addresses and presenting a TOS in the footer, no? But in a switcheroo, the court says Zippo is antiquated, Instead, the court evaluates the websites’ contacts with Virginia.

First, the site operator’s “contacts with Virginia are plentiful. In the relevant period, between October 2017 and September 2018, more than half a million unique visitors went to the Websites, totaling nearly 1.5 million visits. These visits made Virginia one of the most popular states in terms of unique visitors as well as number of visits.” Seriously? This just shows that a large web service had users from around the globe.

Second, the interactions with Virginia users were “commercial” “because Kurbanov has made a calculated business choice not to directly charge visitors in order to lure them to his Websites.” 😑 Correct me if I’m wrong, but this seems to be circular. The court seems to be saying that either the site charged users, which would be a commercial interaction, or it deliberately chose not to charge users, which would be a commercial interaction. Per this court, apparently every revenue-generating website always commercially interacts with its users.

The court continues (emphasis added): “Far from being indifferent to geography, any advertising displayed on the Websites is directed towards specific jurisdictions like Virginia. Kurbanov ultimately profits from visitors by selling directed advertising space and data collected to third-party brokers, thus purposefully availing himself of the privilege of conducting business within Virginia.” But wait…the court didn’t cite any evidence that any advertiser actually bought the right to display ads to Virginia residents; it hypothesizes that such purchases could have happened. The defendants apparently conceded that their ad brokers geotargeted ads, but the appellant brief doesn’t try to show that any of those ads were geotargeted to Virginia. Thus, thee court collapsed the distinction between targeted ads and geotargeted ads–the revenues surely came from targeted ads, but the court didn’t cite any evidence of revenues from Virginia-geotargeted ads.

Furthermore, it’s possible the defendant websites handed off user data to ad brokers. The defendants’ TOS reserves the right to do so, and the appellant brief repeatedly hammers on this contractual provision. However, it’s more likely the ad brokers gathered their own data and made all decisions about how to match advertisers and ad inventory. The court collapses the distinction between the websites and ad brokers: “Kurbanov facilitates targeted advertising by collecting and selling visitors’ data. While he has outsourced the role of finding advertisers for the Websites to brokers, the fact remains that he earns revenues precisely because the advertising is targeted to visitors in Virginia.”

The other facts about U.S. contacts (DMCA registration, domain name registration, AWS, etc.) “might not be individually sufficient to confer specific personal jurisdiction, but when viewed in the context of other jurisdictionally relevant facts, they contradict Kurbanov’s contention that he could not have anticipated being haled into court in Virginia.”

Claims Arising from the Virginia Contacts. “Kurbanov made two globally accessible websites and Virginia visitors used them for alleged music piracy. In addition, Kurbanov knew the Websites were serving Virginian visitors and yet took no actions to limit or block access, all while profiting from the data harvested from the same visitors.” As Prof. Trimble has asked, will the failure to deploy geoblocking be counted against defendants? This court does exactly that.

In summary, the court (futilely) explains why the plaintiffs’ arguments don’t apply equally to every website:

this is not a situation where a defendant merely made a website that happens to be accessible in Virginia. Rather, Kurbanov actively facilitated the alleged music piracy through a complex web involving Virginia visitors, advertising brokers, advertisers, and location-based advertising. From Virginia visitors, he collected personal data as they visited the Websites. To the advertising brokers, he sold the collected data and advertising spaces on the Websites. For end advertisers, he enabled location-based advertising in order to pique visitors’ interest and solicit repeated visits. And through this intricate network, Kurbanov directly profited from a substantial audience of Virginia visitors and cannot now disentangle himself from a web woven by him and forms the basis of Appellants’ claims. Thus, we find these facts to adequately establish an “affiliation between [Virginia] and the underlying controversy.”

From my vantage point, the only real distinction between every website and these defendants is that allegedly the defendants intentionally geotargeted ads to Virginia. This is not a new grounds for jurisdiction–remember the LICRA v. Yahoo case from 20 years ago?!–but the prevalence of outsourcing ad sales and geotargeting ads suggests that the court nevertheless is describing pretty much every ad-supported website, whether it intended to or not.

It’s pretty clear this panel stretched jurisdiction law to help the copyright owners. This would be a good case for an en banc rehearing. Alternatively, the district court on remand could find that jurisdiction isn’t reasonable and find for the defendants. Remember, if the plaintiffs really want to get the defendants, the Russian courts are another choice.

← Court Upholds Formation of a Lengthy Contract Presented on a Mobile Device–Hidalgo v. AAU
My Interview With Mathew Ingram Regarding Section 230 →
Subscribe to Blog via Email
Categories