Is Wikileaks Protected by Section 230? The Trump Campaign Thinks So 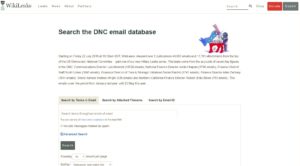 In Cockrum v. Donald J. Trump for President (see the amended complaint), the Trump campaign is being sued for allegedly colluding with Wikileaks and the Russians to disclose the plaintiffs’ private information in the DNC email dump. I have no opinion about the merits of the lawsuit generally.

However, I do have thoughts about the arguments in Trump campaign’s motion to dismiss that Section 230 immunity applies to Wikileaks, and that immunity eliminates any conspiracy by negating any illegal act. On this point, the brief says (in total):

Plaintiffs likewise cannot establish vicarious liability by alleging that the Campaign conspired with WikiLeaks. Under section 230 of the Communications Decency Act (47 U.S.C. § 230), a website that provides a forum where “third parties can post information” is not liable for the third party’s posted information. Klayman v. Zuckerberg, 753 F.3d 1354, 1358 (D.C. Cir. 2014). That is so even when even when the website performs “editorial functions” “such as deciding whether to publish.” Id. at 1359. Since WikiLeaks provided a forum for a third party (the unnamed “Russian actors”) to publish content developed by that third party (the hacked emails), it cannot be held liable for the publication.

That defeats the conspiracy claim. A conspiracy is an agreement to commit “an unlawful act.” Paul v. Howard University, 754 A.2d 297, 310 (D.C. 2000). Since WikiLeaks’ posting of emails was not an unlawful act, an alleged agreement that it should publish those emails could not have been a conspiracy.

Does Wikileaks Qualify for Section 230 Immunity?

At first glance, it looks like Wikileaks should qualify for Section 230 protection in this case. A prima facie Section 230 defense has 3 elements:

Some reasons why Section 230 nevertheless may not apply:

Extraterritorial Application: The complaint doesn’t specify where Wikileaks is located. Wikileaks doesn’t explain its location either. Wikileaks describes itself as a “multi-national media organization” and claims it “has more than one hundred other staff accross [sic] the Americas, Africa, Eurasia and the Asia Pacific.” So, is Wikileaks is located in the United States? If not, does Section 230 nevertheless immunize an international defendant being sued in a US court? I think that Section 230 applies to all defendants being sued in US courts regardless of their location, but I cannot recall a similar case raising this question squarely. If you think of a case I’m forgetting, please let me know. [UPDATE: Not directly on point, but the Gonzalez v. Google and Cohen v. Facebook cases both said that Section 230 applies extraterritorially, though the defendants in those cases were based in the US.]

The Batzel Exception: In Batzel v. Smith, the Ninth Circuit said an online publisher qualified for Section 230 immunity only for materials that third parties submitted to it for publication. If the materials were submitted to the publisher for some other purpose (or with some expectation that they would be kept confidential), but the publisher made the unilateral decision to publish the materials anyway, Section 230 wouldn’t immunize that publication decision. So the question here is whether the DNC materials were submitted to Wikileaks with an expectation of publication. Based on the complaint’s allegations, it seems pretty clear that the Russians allegedly submitted the DNC emails to Wikileaks with the intent that it be published, so I don’t think the Batzel distinction would limit Section 230’s availability. I’ve always considered the Batzel case a tortured decision, so I’m not sure if other courts would really follow it.

The IP Exception: The plaintiffs are suing for privacy rights violations (e.g., public disclosure of private facts). Ordinarily, Section 230 preempts privacy claims. However, Section 230 expressly excludes “IP claims,” and that exclusion applies to publicity rights claims in all jurisdictions outside the 9th Circuit (this case is in the DC Circuit). Common law public-disclosure-of-private-facts claims are related to the publicity rights claims in that they are two of Prosser’s four privacy torts. Would a court stretch the IP exception to exclude the sibling claims to a publicity rights claim? I doubt it, and courts shouldn’t do so.

The ECPA Exception: Section 230(e)(4) says: “Nothing in this section shall be construed to limit the application of the Electronic Communications Privacy Act of 1986 or any of the amendments made by such Act, or any similar State law.” What does the ECPA exception mean? Cases rarely discuss it. I did a quick Westlaw search and found only 10 cases referencing Section 230(e)(4), most of those just citing the statute without discussion (see, e.g., UCS v. Lycos, saying that exception didn’t apply because the plaintiff didn’t allege an ECPA violation). Furthermore, because the ECPA doesn’t have a clear doctrine of secondary liability, it’s hard to construct a prima facie case that implicates Section 230.

This exception comes up because it’s probable that the DNC hack involved an ECPA violation. Does that mean that Wikileaks’ further disclosures of the materials obtained in violation of the ECPA might fit into this exception? The leading case on this topic is the Seventh Circuit’s ruling in Doe v. GTE, which involved the recording of locker room activity and the public sale of those recordings in likely violation of the ECPA. Can GTE, which hosted the site selling the illegal material, qualify for Section 230 protection despite the initial ECPA violation? The court’s ruling is tortured and has not been followed by most other courts, but the court concluded that the initial ECPA violation didn’t affect GTE’s Section 230 defense, despite Section 230’s ECPA exception. The same will likely apply to Wikileaks.

Does Wikileaks’ Eligibility for Section 230 Resolve the Conspiracy Claim Against the Trump Campaign?

While Section 230 should provide immunity to Wikileaks, does that immunity then mean that there’s no conspiracy because no illegal act took place? The motion to dismiss invests nearly no energy on this topic, saying simply: “Since WikiLeaks’ posting of emails was not an unlawful act, an alleged agreement that it should publish those emails could not have been a conspiracy.”

I’m not convinced. The problem is that Section 230 is an immunity from lawsuits, not a declaration of what’s legal or illegal. For example, behavior immunized by Section 230 can still be illegal under one of its various exceptions, such as IP, ECPA and federal criminal prosecutions. The latter exception provides a pretty good clue that Section 230 doesn’t render the immunized behavior “legal.” For example, if the US Department of Justice were to prosecute Wikileaks (which reports indicate is being considered), Wikileaks could not invoke Section 230 against that prosecution–so, in theory, it could be convicted for its activities. Therefore, I’m not sure that Section 230’s immunity from some lawsuits dictates the conclusion that Wikileaks did not act illegally. At minimum, the legal analysis deserved more than a single sentence.

Note 1: Section 230 doesn’t necessarily preempt conspiracy claims. See, e.g., Tanisha v. Chandra. However, the Tanisha case’s exception for conspiracy claims doesn’t apply because the Trump campaign is invoking Section 230 as a defense for Wikileaks’ conduct rather than as a direct immunity for its own conduct.

Note 2: General Steel v. Chumley (10th Circuit 2016) said: “Section 230 of the CDA provides immunity only from liability, not suit.” It made this statement in the context of a procedural issue (whether Section 230 supported interlocutory appeal), and I don’t believe that opinion addresses whether the Section 230 makes the underlying activity legal.

So my conclusion: I think Wikileaks probably qualifies for Section 230 immunity in this case. I’m not confident that the immunity negates the predicate illegal act required to form a conspiracy. Though it’s beyond the scope of this blog post, to be clear, the campaign could have other powerful defenses beyond Section 230. The First Amendment and Bartnicki v. Vopper come to mind.

As we know, Trump routinely takes duplicitous positions. He just cares about winning, so if an argument could help him win in one case and a contradictory argument could help him win in a different case, he will freely talk out of both sides of his mouth without hesitation. For example, Trump is a serial defamation litigant. He has draped himself in the First Amendment flag on the defense side, while at the same time threatening to “open up libel law” and taking anti-First Amendment positions on the plaintiff side.

So I do not believe that the Trump campaign’s embrace of Section 230 in this case signals any true support for Section 230. Instead, I’m pretty confident that, if passed by Congress, Trump would sign SESTA or the Wagner bill so he could claim personal credit for the legislation (and because it would be well beyond his abilities to grasp how the bills would undermine Section 230).